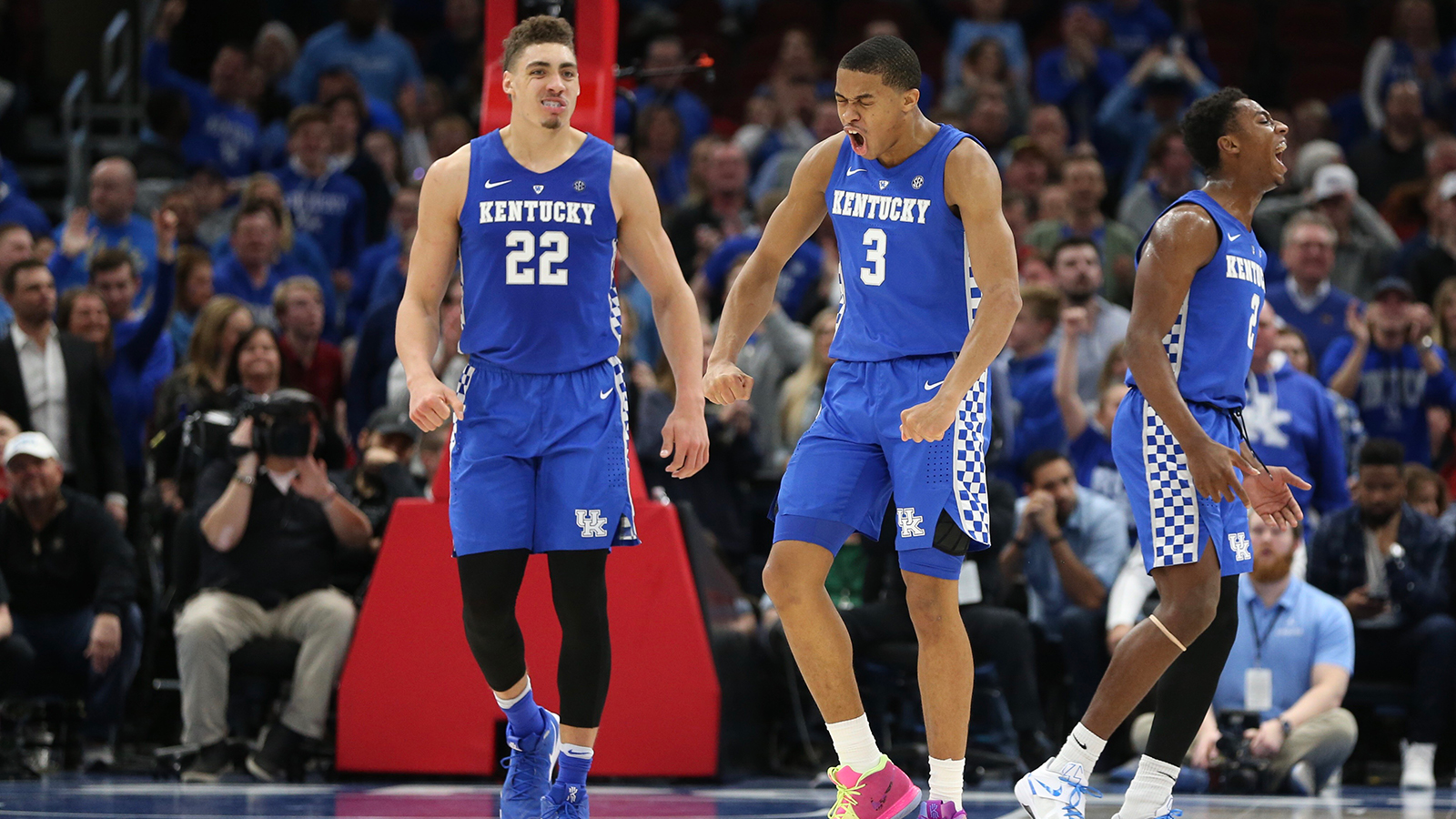 CHICAGO – John Calipari sees No. 19 Kentucky rounding into form. Beating North Carolina sure is a good way to drive home that point.

Keldon Johnson scored 21 points and Reid Travis added 20 to lead the Wildcats to an 80-72 victory over the ninth-ranked Tar Heels in a matchup between two of college basketball’s winningest programs on Saturday.

Johnson scored 16 in the second half, helping Kentucky (9-2) hold off North Carolina (8-3) in their first meeting since the 2017 NCAA South Regional final. The Tar Heels won that game on a last-second jumper by Luke Maye en route to their sixth NCAA title.

This time, Johnson came on strong down the stretch after Travis got off to a scorching start.

Johnson hit three 3-pointers in the second half and made 4 of 7 from beyond the arc overall. Travis dominated down low in the early going, scoring 16 as the Wildcats grabbed a 40-31 halftime lead.

Tyler Herro scored 15. PJ Washington added 11 points, 10 rebounds and a career-high eight assists. Ashton Hagans contributed a school-record-tying eight steals, and Kentucky won its second in a row since an overtime loss to Seton Hall at Madison Square Garden. The other defeat was a season-opening blowout by Duke in Indianapolis.

“If we had won (the Seton Hall) game, we wouldn’t have all this craziness,” Calipari said. “But this is Kentucky. Good luck. … We have the greatest fans in the country, we do. But they also want to win every game by 25.”

The Wildcats probably wouldn’t mind that, either. But they’ll take a tight win over one of the nation’s best teams.

“I don’t think either team played exceptionally well but John’s club played better, (they were) better prepared and it’s a little frustrating for us right now,” coach Roy Williams said.

Cameron Johnson led North Carolina with 17 points. Maye scored 16 for the Tar Heels, who knocked off then-No. 4 Gonzaga one week earlier. This was their first game since the school announced an eight-year contract extension through the 2027-28 season for its Hall of Fame coach.

“We have to do a better job of holding our team accountable and coming back off a big win with the mindset that we’ve got to get another one,” Maye said. “We just didn’t come in and do that today.”

Kentucky was leading 66-55 with just under eight minutes to go after Keldon Johnson nailed 3-pointers on back-to-back possessions.

North Carolina then cut the lead to six, but two steals by Hagans helped bump it back up to 11. The first led to a 3 by Washington, and Hagans then scored on a breakaway layup off another steal to make it 71-60 with 5:50 left.

“I’m putting the ball in his hands and he’s making the right plays,” Calipari said. “He’s making the game easy for everybody now. He did jog it up a little bit today and I got on him, but the reality of it is it’s kind of like a pressing team; you press a pressing team. And if a team is a speed team you go right back at ’em with speed. Which is what we were trying to do today.”

North Carolina: The Tar Heels will have to do a better job on the glass and hanging onto the ball. They got outrebounded 43-33 and committed 17 turnovers, leading to 20 points. North Carolina coughed it up 22 times against Gonzaga.

Kentucky: The Wildcats came away with the win despite committing 18 turnovers and making just 9 of 26 3-pointers.

“He’s just a great coach. He’s got a lot of great ideas for the program. And he’s gonna continue to do a great job.” — Maye on Williams’ extension.