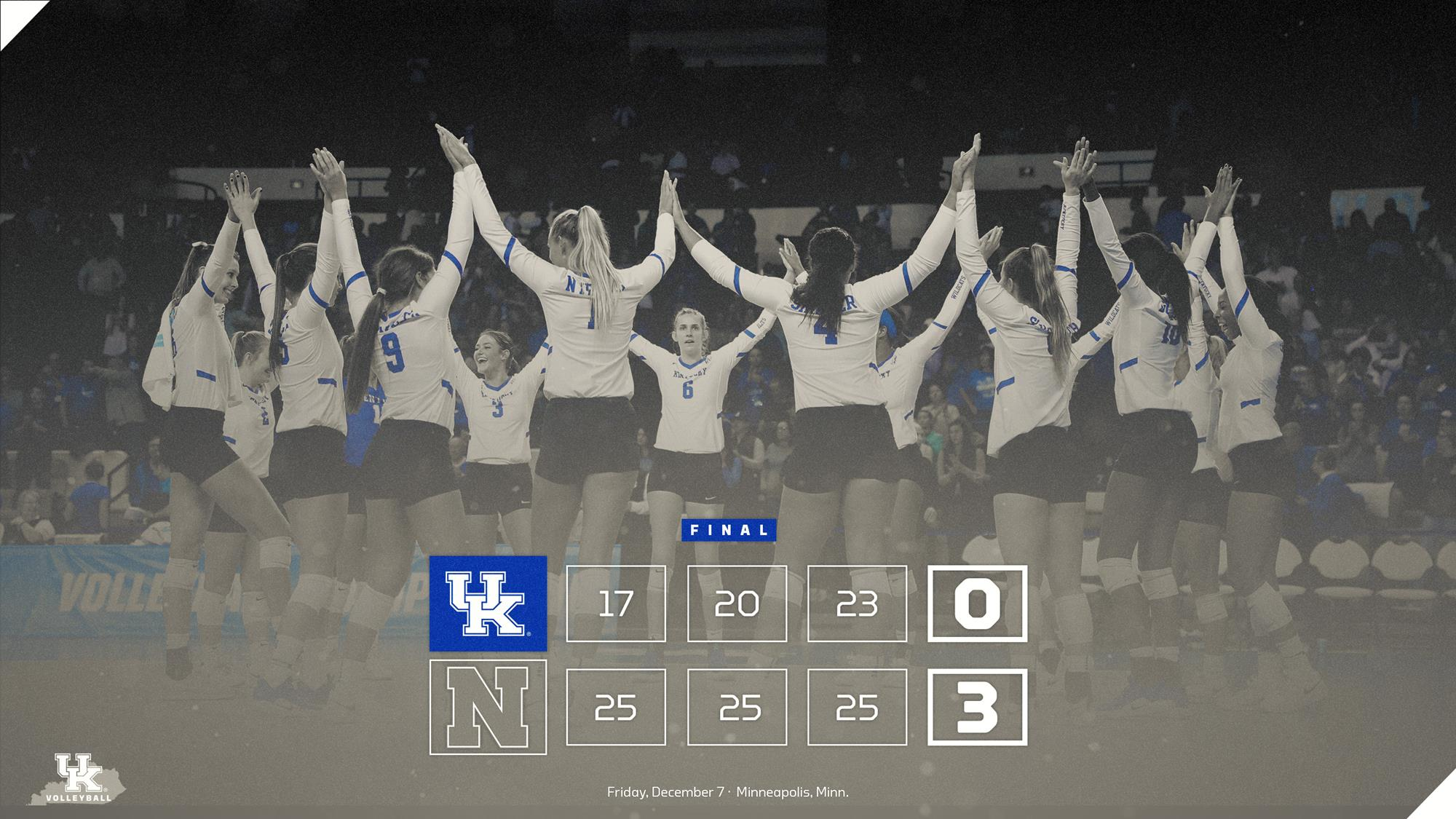 MINNEAPOLIS – No. 7 Nebraska advanced past No. 10 Kentucky on Friday afternoon with a 3-0 win (25-17, 25-10, 25-23) at Maturi Pavillion on the campus of the University of Minnesota in Minneapolis. It snapped a 23-match winning streak for the Wildcats.

Nebraska will advance to Saturday’s NCAA Regional Final against the winner of (2) Minnesota and (15) Oregon. The Wildcats finish the season with a record of 26-5 overall, while Nebraska improves to 27-6.

“I’m very proud of this group and all that they accomplished this season,” UK head coach Craig Skinner said. “Give a lot of credit to Nebraska. They were able to play very well tonight; but I was proud to represent our athletes and Kentucky today.”

The loss today does not diminish the historic season for the Wildcats. For the first time since 1988, Kentucky concluded regular-season action within Southeastern Conference play unblemished, at 18-0. It was the seventh SEC crown for Kentucky in program history and first time winning in back-to-back seasons since 1987-88. The SEC coaches took notice, voting Edmond the SEC Player of the Year, Skinner the SEC Coach of the Year, Stumler SEC Freshman of the Year and Gabby Curry the SEC Libero of the Year. Lilley took home AVCA All-Southeast Region Player of the Year honors and Skinner was voted coach of the year.

Friday afternoon marked the second-consecutive season and fifth time overall that the Wildcats advanced to the Sweet 16 under Skinner. The team has won 20 or more matches in 11 seasons, including eight straight. The Wildcats are one of just 10 teams to make the NCAA Tournament in each of the last 14 seasons – all under the helm of Skinner.

SET 1
Nebraska made the first substantial run of the opening set, winning four points in a row to creep ahead 11-7, and force UK into its first timeout of the set. The Wildcats were plagued by service errors, with three inside the first 18 points of the frame. Swings on the right side by Edmond and Kendyl Paris pushed Kentucky to within three points at 16-13, but a 3-0 Nebraska run pushed the Huskers’ lead to 18-13 and UK burned its second timeout. Five straight Nebraska points followed and the Huskers cruised to a 25-17 opening-set win. Kentucky was held to just .100 hitting offensively and had eight attacking errors, with four at the service line. Nebraska, led by Lexi Sun’s four kills, hit .233 in the set and had just three errors.

SET 2
The Wildcats struggled out of the gates in the second set and dropped six of the first seven points. After Nebraska went on a 3-0 run to take an 8-2 lead, Kentucky called a timeout. Cooper and Morgan had a block at the net to punctuate a 3-0 run and UK climbed back into the set at 9-5 as the Huskers used their first timeout. Edmond slammed home a kill from the middle to cap off the longest rally of the set and pull the Wildcats to within 14-10. Skinner and Cooper kept the Wildcats in the set as back-to-back kills from the right side pulled UK to within two at 17-15 and forced the Huskers to use their second timeout. Nebraska closed out the set by winning six of the last eight points to win the set, 25-20.

SET 3
Kentucky came out of the locker room with high energy and intensity, placing four of the opening five points in its column to take a 4-1 lead. After back-to-back kills by Cooper and Skinner – the Huskers called a timeout as they found themselves trailing 10-6 – the largest deficit of the match to that point. Stumler found the floor on the Wildcats’ first ace of the match and Nebraska called a subsequent timeout as UK’s lead extended to 15-9. The Huskers climbed to within four at 18-14 after back-to-back kills and an ace by Megan Miller to force the Wildcats to call a timeout. Nebraska rallied to win nine of 10 successive points and on a challenge, set up match point at 24-23. A kill from the right side ended the match.