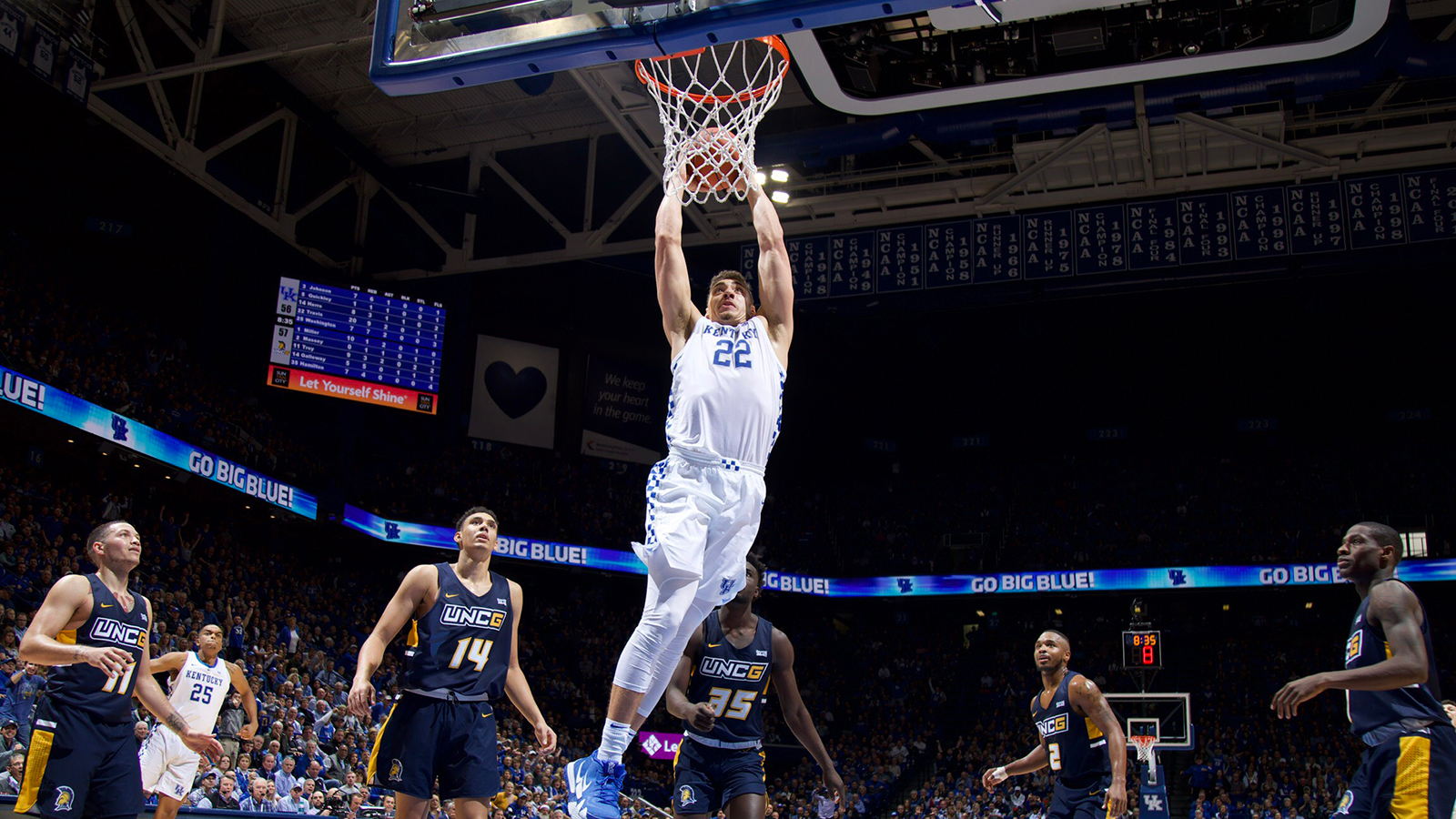 Travis Holds Down the Fort before Cats Close One Out

For much of this Kentucky team, every experience is a new one.

Not so for Reid Travis.

After four years at Stanford, there really isn’t a kind of game Travis hasn’t played in. No wonder he knew exactly what to do when the Wildcats found themselves in a tooth-and-nail battle with UNC Greensboro.

“It feels good,” Travis said. “It feels good. Had a good week of prep, just getting ready for the game. I thought I was put in some good positions by my teammates, was able to stay active on the boards. Just a combination of all those things kind of working out, so I’m happy with that.”

As his teammates battled the inconsistency that inevitably come with youth, Travis stepped up. When UK needed a basket or a rebound, Travis was there. When the Cats needed an answer to a UNCG haymaker, it was normally Travis who delivered it. A monster performance by Travis – 22 points, 12 rebounds and two assists in 37 minutes – was indispensable as No. 10/9 UK (7-1) closed out a 78-61 victory over the visiting Spartans (7-2) at Rupp Arena Saturday.

“We knew that coming in,” Travis said. “Coach has preached all week this team was going to test us. They got veterans. They run good stuff on offense. That 1-2-2 press that they run is something that we’ve never seen before. So we knew it was going to be a challenge and it was going to be a good game. I’m just happy with the outcome and the way we kind of fought through in the second half.”

Travis did enough for UK to withstand an early onslaught from UNCG – especially Francis Alonso, who matched Travis with 22 points. When his younger teammates found their feet in a tight game, the Cats flourished.

Rather than having to make seemingly even big play, Travis merely made his share down the stretch. He had a dunk to put UK ahead for good with 8:35 left, then had a tap-out offensive rebound to set up a second straight dunk by Keldon Johnson and cap a game-turning 8-0 run with 6:02 to go.

“I think we can be really special when we play with the intensity that we had today,” Johnson said. “As you see, we were out there, we were feeding off each other and no one person was trying to bring somebody down. Everybody was for each other out there and that’s what it takes to be a really good team.”

Johnson and Herro were both clutch down the stretch, combining for 16 points as UK closed the game on a 22-4 run. Herro finished with 18 points – 12 coming after halftime – and Johnson 13 points and 11 rebounds in spite of briefly exiting late in the first half with an ankle injury.

UK’s two freshman wing players might have done plenty of damage in the box score, but Ashton Hagans’ primary impact wasn’t statistical. He took on the challenge of guarding UNCG’s Alonso after he had already gotten hot and did outstanding work. Hagans was responsible for Alonso’s lone first-half miss, blocking a midrange jumper, and held him to three points on 1-of-3 shooting in the second half.

“What I liked with Ashton, it’s not what he did offensively,” John Calipari said. “We put him on No. 10. We said, we can either let the kid get 60 or put Ashton on him, and then Ashton made him work to get shots and run, and all of a sudden you’re into their legs.”

The final piece of the puzzle Saturday was a season-high crowd of 21,853 that ramped up the intensity along with the team. Fans grew louder with every stop, and there were plenty with UK allowing just six points over the final 13 minutes.

“I loved it,” Travis said. “When the noise was going, the atmosphere and we were really trying to lock in on defense, the fan really helped us with that and gave us a lot of energy. To have a game this early in the season when there’s that much energy in the building, we loved that and we fed off that.”

The Cats will have to wait longer than they have been accustomed to for their next opportunity to play in front of a crowd, as UK has a week off before going to Madison Square Garden to take on Seton Hall. They might miss the roar of their fans a bit this week, but they know it’s for their own good.

“We’re going to grow a lot,” Travis said. “This is something where you look at the schedule and see we’re only playing on Saturdays for the next five weeks. We have a full week to prepare but also just a full week to get better at the things that we need to as a team, individually.”

Improvement. That’s the name of the game for Kentucky.