LEXINGTON, Ky. – Senior Brooke Morgan exploded for a career-high-tying 15 kills to help pace the 19th-ranked Kentucky volleyball team to a 3-0 (25-14, 26-24, 25-17) win over visiting Arkansas in its Southeastern Conference home opener on Friday in front of 2,089 fans. Morgan led the way with 15 kills on a team-high .583 hitting percentage to couple with a pair of blocks and three digs.

For the second-consecutive match the Wildcats rallied late in a set to help the winning cause. A 13-5 stretch pushed the Cats past Tennessee in their SEC opener, tonight it featured an 8-2 run in the second frame to fight back for the 26-24 set win. Morgan served five of those points and had an ace in the spurt. Junior Leah Edmond picked up four kills over the final eight points.

“Our serving got better and better as the match went on,” head coach Craig Skinner said. “They came out with a completely different lineup than we had seen on video. Even though we started well, they got rolling in the second set and got more comfortable with it. The third set – we separated ourselves again with serving. We got a lot of swings out of Brooke (Morgan) tonight, which is nice because she’s going to see a lot of opportunities to kill the ball. We stayed steady and got the job done.”

Kentucky improves to 8-4 on the season and 2-0 in league play. Arkansas falls to 6-7 overall and 0-3 in SEC action. UK remains home and will host Missouri on Sunday. That match is slated for a 1 p.m. ET first serve and it will air live on the SEC Network. Courtney Lyle and Jenny Hazlewood will call the action.

Edmond continued her streak of matches with 10 or more kills, matching Morgan’s total output of 15. She also contributed four digs and two blocks. Junior Caitlyn Cooper posted nine hammers on an impressive .500 attacking clip. She also had a pair of rejections.

SET 1
The Wildcats claimed the first six points of the match off four kills from Edmond and two from Morgan. The Cats gave up a point on a service error but Morgan and Edmond added onto their kill totals to get the Cats to get to 8-2. UK then went on a 3-0 run off two errors and a block from Kendyl Paris and Edmond. Arkansas added a kill and UK went on to claim four of the next five points off three kills from Cooper and one from Paris to get to 15-4 at the media timeout. The teams traded two-point swings before the Razorbacks notched two consecutive points to decrease their deficit to 17-8. Morgan picked up her sixth kill after and UK scored on two attack errors to get to 20-9. Arkansas claimed three of the next four points on two kills and a block, countering UK’s block from Morgan and Lilley. Cooper notched her fifth kill and Avery Skinner picked up her first following a Razorback termination. Arkansas posted two more kills but a Razorback attack error and Skinner’s second kill capped the set for the Wildcats.

SET 2
UK notched the first two points of the set off a Razorback service error and Edmond’s hard-hit fifth kill. Arkansas capitalized on the next two rallies before the teams alternated kills – the Wildcats coming from Edmond and Morgan – to 4-4. Paris added a kill for her second of the match prior to two Arkansas kills. Cooper got a kill and Skinner notched two before Arkansas tallied points on seven of the next eight rallies to hold a 15-8 lead. Edmond notched a kill then an attack error. UK then went on a 4-0 run with Edmond’s ninth termination and first ace. Alli Stumler reentered the match with a kill to bring the Cats to within three at 18-15. The Razorbacks struck on the next two rallies before the teams traded points to get to 21-17. The Wildcats took the next two points on a service error and Morgan’s ninth kill on the right side. UK answered an Arkansas power shot with a 5-0 run featuring an ace from Morgan, Edmond’s 11th kill and Lilley’s first. Arkansas went on to take the next two points but it wasn’t enough as Edmond added two more kills and Cooper and Paris teamed up for a block on the left to end the set. UK trailed by as many as seven and came back to win 26-24. 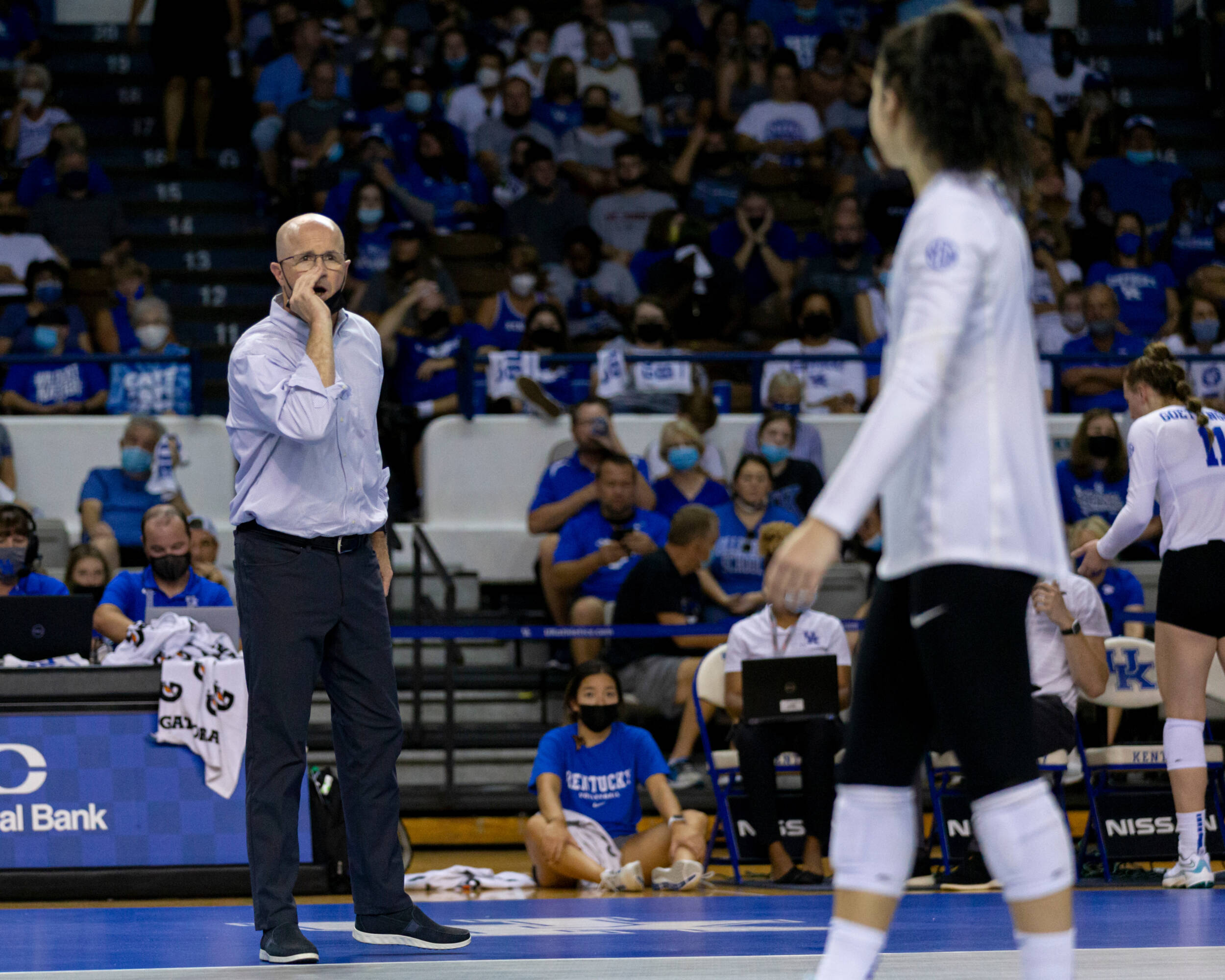