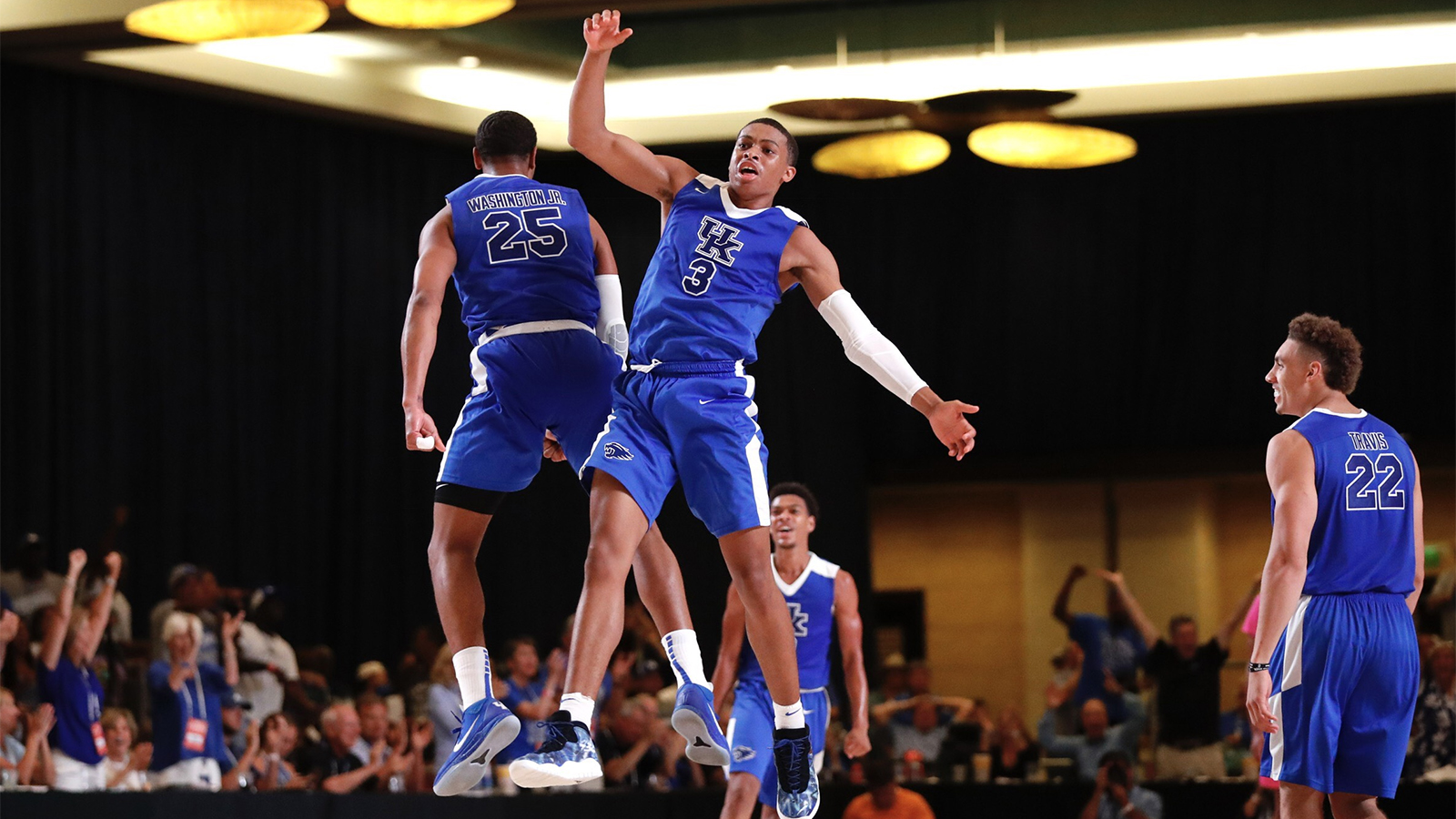 NASSAU, Bahamas – Kentucky has only been together as a team for a couple months. In that time, John Calipari hasn’t spent any time working specifically on defense.

Watching the Wildcats on Saturday night, you wouldn’t know it.

UK turned up the heat on Mega Bemax in both the half-court and full-court in the third game of its Big Blue Bahamas Tour. Facing a physical Serbian professional club that has produced nine NBA Draft picks since 2014, the relentless Cats held their opponents to 30.3-percent shooting in a 100-64 victory.

“I loved our effort,” UK assistant coach Joel Justus said. “Our energy was tremendous. It was an elite performance by our guys. We talked about it. Our guys are young, but they know basketball and they know that that team is a good team, it’s a proud team that plays hard, that’s had tremendous success. They respect that and they came out today and gave an extreme effort.”

That defense is what paved the way for UK to create separation early, as the Cats held Mega Bemax to one point over the course of a stretch of more than six minutes starting at the 17:37 mark of the first half. That fueled a 19-1 run that turned a tie game into a bit of a laugher.

“They love basketball,” Justus said. “This group really does love basketball. They love to be in the gym by themselves, with a couple guys. They love to compete and this was another chance to go and do it against somebody else. This is something that we’re finding out about them and we’re obviously very excited about that.”

On offense, it was a balanced, unselfish effort and a handful of highlight-reel plays that got the job done. UK’s two leading scorers – PJ Washington (20 points, 12 rebounds) and Keldon Johnson (16 points) – had the best of the bench in quick succession in the second half, with Washington throwing down a ferocious one-handed poster dunk in the half-court mere seconds before Johnson did the same with two hands in transition off a perfect alley-oop feed from Quade Green.

Six of the eight UK players who were on the floor for at least 10 minutes scored in double figures, while Reid Travis felt just short of joining them with eight points. The Cats’ passing was similarly democratic, with UK assisting on 22 of its 29 made baskets even though Ashton Hagans and Quickley led the way with just five.

“All these guys come in the gym, they all want it more than anything,” Washington said. “When guys do that, it’s hard to stop us. Everybody’s making shots, everybody’s happy for each other and that’s a big part of it as well.

Coach Cal knew he was going to learn about the Cats on this trip. Three games in, it seems the biggest issue coming out of it will be managing the mounting hype surrounding his team. Few college teams – particularly one this young – could dominate professionals in this way. With a national-television audience watching and announcers regularly calling UK the early favorite for the national championship, expectations for this group could be high even by Kentucky standards.

Sunday, the Cats will have their final on-court opportunity to add to the hype until Big Blue Madness when they face Team Toronto in their Big Blue Bahamas finale at 4 p.m. on the SEC Network.

“This has been great,” Justus said. “We’re three-fourths of the way done here and I think we’re excited once again to be out tomorrow afternoon and play, have another opportunity to compete. They’re already saying that right now.”