LEXINGTON, Ky. – If Friday’s showing at the Marion Miley Invitational is any indication, the Kentucky women’s golf team appears to be poised for a strong season in 2018-19, which begins in just two months.

Junior Josephine Chang finished four shots back at 4-over par for a third-place showing. Incoming freshman Casey Ott won junior championship honors and tied for fourth overall at 7-over par. Sophomore Sarah Fite and Ryan Bender tied for sixth at 10-over par.

Carlin was at or near the top of the leaderboard throughout the two-day, two-round tournament, but it was her play on the back nine of the final round that clinched the championship. The Keller, Texas, native started the day a shot back of Tyree and was neck and neck with the Hilltopper before pulling away with a score of 3-under par on Friday’s back nine. 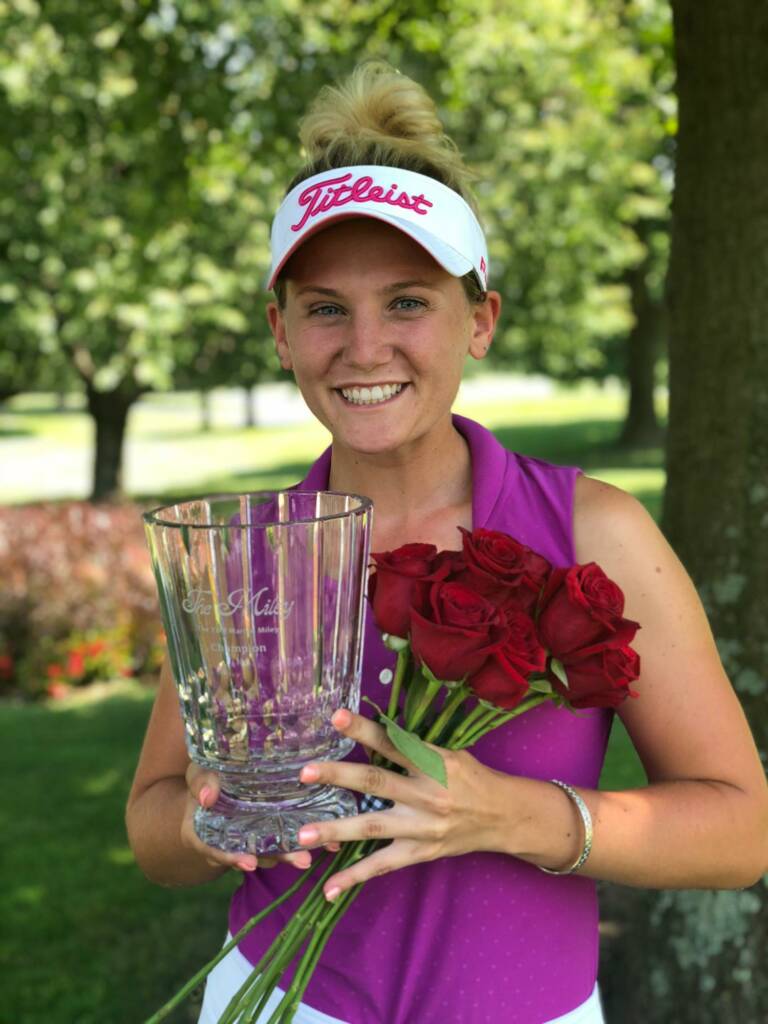 After bogeying No. 10, Carlin closed with four birdies to eliminate any final-hole drama. She putted in for on No. 18 for the two-stroke win.

The victory could be a big momentum boost for one of Kentucky’s two seniors heading into the 2018-19 season. The other, Leonie Bettel, is currently representing Austria in the 2018 European Team Ladies Championship.

Carlin, a former walk-on, took on an increased role last season with a career-high eight appearances. She, along with Bettel, will be relied on for leadership and experience this upcoming season as the Wildcats try replace departing seniors Isabelle Johansson, Grace Rose and Ale Walker, who accounted for 287 total rounds during their decorated collegiate careers.

This weekend’s performance by all five Wildcats at the Marion Miley should offer plenty of optimism that UK can build on the foundation laid by Johansson, Rose and Walker. The Wildcats dominated the field with three players winning medalist honors.

Chang actually started the final round in front of Carlin after a tournament-opening 72. She was tied for Tyree for the lead at even par. Chang, who has appeared in 14 events in her first two seasons at UK, wasn’t able to sustain the momentum in the final round, but her 76 Friday was good enough for a third-place finish.

Ott, a two-time Wendy’s Arkansas Golfer of the Year award winner, was the low junior of the tournament with a score of 7-over par overall. She improved on her opening round with a 2-over-par 74 in the finale.

Fite and Bender, the 2017 Kentucky High School Athletic Association individual state champion, were even with one another throughout the tournament. They fired 78s in the opening round and 76s Friday.

The Marion Miley, named after a local and decorated amateur Lexington golfer in the 1930s and 1940s whose was murdered at just 27 years old, is considered one of the most prestigious amateur women’s golf tournaments in the state of Kentucky. UK players have experienced quite a bit of success at the Marion Miley. Recent winners include Ashlee Rose (2008), Betsie Johnson (2009) and Grace Rose (2016).

The Wildcats unveiled their 2018-19 schedule earlier in the week. The slate, which begins, Sept. 10-11 at the Minnesota Invitational, features nine regular-season stroke-play tournaments and the annual Battle of the Bluegrass before the Southeastern Conference Championship and NCAA Tournament.