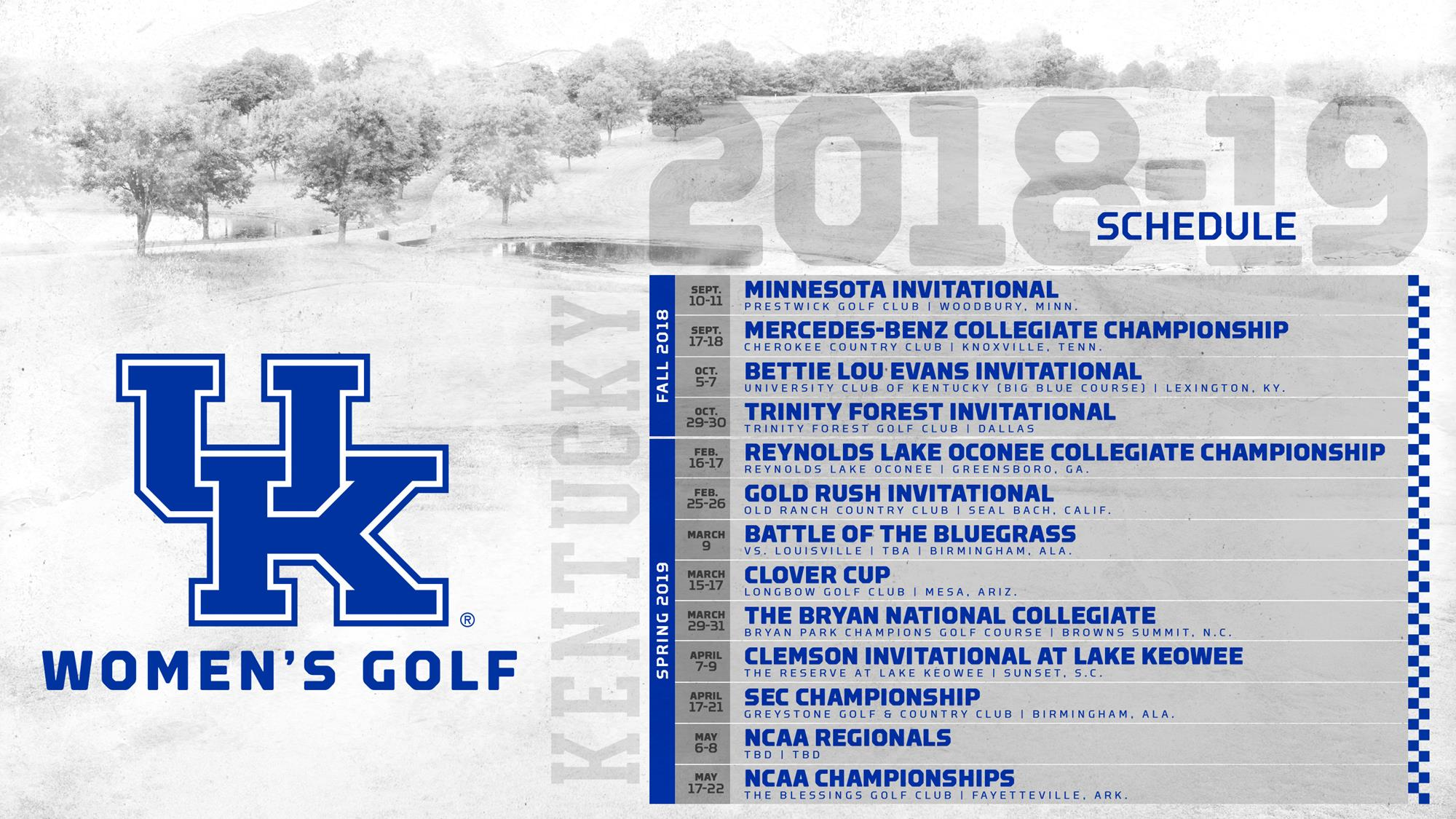 LEXINGTON, Ky. – The Kentucky women’s golf team has released its schedule for the 2018-19 season, a slate that includes opportunities for growth and tests that will build experience for a team that has its eyes set on a return to the postseason.

The schedule features nine regular-season stroke-play tournaments and the annual Battle of the Bluegrass before the Southeastern Conference Championship and NCAA Tournament. It also includes four tournaments that UK played in last season and three that will be first-time visits.

“I’m excited about our schedule for next year,” head coach Golda Borst said. “It’s competitive and balanced and will give us a great deal of opportunities to compete against a lot of different teams around the country. The goal with our tournament schedule is to prepare our team for postseason, and I believe that this schedule will do just that.”

The schedule includes two trips out west, an annual stop at the Bryan National Collegiate – always one of the toughest tournaments in the country – and new stops in Dallas and South Carolina. Plus the Wildcats will host the Bettie Lou Evans Invitational for the second season in a row.

But first the Wildcats open the season in Woodbury, Minnesota, at the Minnesota Invitational on Sept. 10-11. The Minnesota Invitational is one of three tournaments in the fall that will follow a 36-hole format on the first day of competition followed by 18 holes on the second day. Kentucky last played in the tournament in 2016, placing sixth. Departing senior Isabelle Johansson tied for first as well.

Senior Leonie Bettel will likely have the next weekend, Sept. 17-18 at the Mercedes-Benz Collegiate Championship, circled on her calendar. UK will return to Knoxville, Tennessee, for a second straight year after Bettel recorded the best round in the 21 years of the tournament in last season’s final round. Bettel carded a final-round 65 to finish in 19th place at 1-over par overall. The Wildcats, as a team, tied for tied for seventh with a score of 13-over par.

But the highlight of the fall will be UK’s home tournament, the Bettie Lou Evans Invitational. Kentucky will host for a second straight year at the Big Blue Course at the University Club of Kentucky. This season’s tournament is slated for Oct. 5-7.

UK has won the tournament 11 times with its last championship in 2011. Departing senior Grace Rose captured co-individual honors at last year’s tournament with a spectacular final-round charge. Previously known as the Wildcat Fall Invitational before dedicating it to Evans, the tournament has been in existence since 1979. It was played every year until a four-year break from 1998 to 2001. There were also one-year breaks in 2007 and 2010 before the latest six-year gap.

The Wildcats will conclude their fall schedule Oct. 29-30 at the Trinity Forest Invitational at Trinity Forest Golf Club in Dallas. This will be the first time UK has played in this tournament in the Borst era.

“Our fall consist of tournaments in Minnesota, Tennessee and Texas, as well as our home event,” Borst said. “We are proud of the Bettie Lou Evans Invitational and want to continue to grow the tournament into one of the best collegiate events in the country. Our team loves to play in front of their families and the Big Blue Nation, so this is one that we are really looking forward to.”

The spring season will have a different feel to it with three tournaments the Wildcats have never played in during Borst’s tenure. Those tournaments include the Reynolds Lake Oconee Collegiate Championship (Feb. 16-17), the Gold Rush Invitational (Feb. 25-26) and the Clemson Invitational at Lake Keowee (April 7-9). Plus, with more two-day tournaments setups, Borst was able to add another tournament in the spring.

Kentucky will start the spring season on Feb. 16-17 in Greensboro, Georgia, for Reynolds Lake Oconee Collegiate Championship, followed by the Gold Rush Invitational on Feb. 25-26 in Seal Bach, California. The trip to California will be the first of two tournaments out west.

In what’s become a spring favorite of the Wildcats, the next tournament will be the Clover Cup in Mesa, Arizona, March 15-17. It will mark the third straight year UK has played in Notre Dame’s annual tournament out west. Led by Bettel’s sixth-place showing, Kentucky finished third last season with a score of 17-ovar par.

There may be no better tournament to prepare a team for postseason play than the Bryan National Collegiate, which the Wildcats will return to March 29-31. Arguably the most difficult course UK will play on during the regular season, the Bryan Park Champions Golf Course in Brown Summit, North Carolina, didn’t yield a score better than 24-over par last season.

“Our entire spring schedule is strong and deep and will prepare our team throughout the spring months,” Borst said. “We are looking forward to competing in some new events such as Mercer’s event at Lake Oconee, Long Beach State’s event in LA and finally at Clemson’s event at Lake Keowee. The schedule really came together nicely for us this year and we can’t wait to get started in a couple of months.”

The SEC Championship, slated for April 17-21, returns to Greystone Golf & Country Club in Birmingham, Alabama. As always, the SEC Championship is expected to be one of the top conference tournaments of the season, as 11 of the league’s teams made NCAA regionals last season.

For the second straight season, the SEC Championship will mirror NCAA Championships format with three rounds of stroke play followed by two days of match play. The top eight teams will advance to match play.

UK will try to return to NCAA regionals after missing last season for just the second time in the eight-year Borst era. Regionals will take place May 6-8 at one of the four following sites: Auburn, Alabama; Cle Elum, Washington; East Lansing, Michigan; or Norman, Oklahoma.

The year’s NCAA Championships will be held May 17-22 at the Blessings Golf Club in Fayetteville, Arkansas.

The Wildcats will have to replace three of the most accomplished players in school history in Johansson, Rose and Ale Walker, but Kentucky’s up-and-coming talent appears ready to do so. Bettel, who finished with the best stroke average on the team last season, returns for her senior year, as does junior Sarah Shipley, who posted the best stroke average in the spring in 2017-18. In addition to returners Claire Carlin, Josephine Chang and Sarah Fite, UK will welcome newcomers Ryan Bender, Casey Ott and Rikkie Svejgård Nielsen.