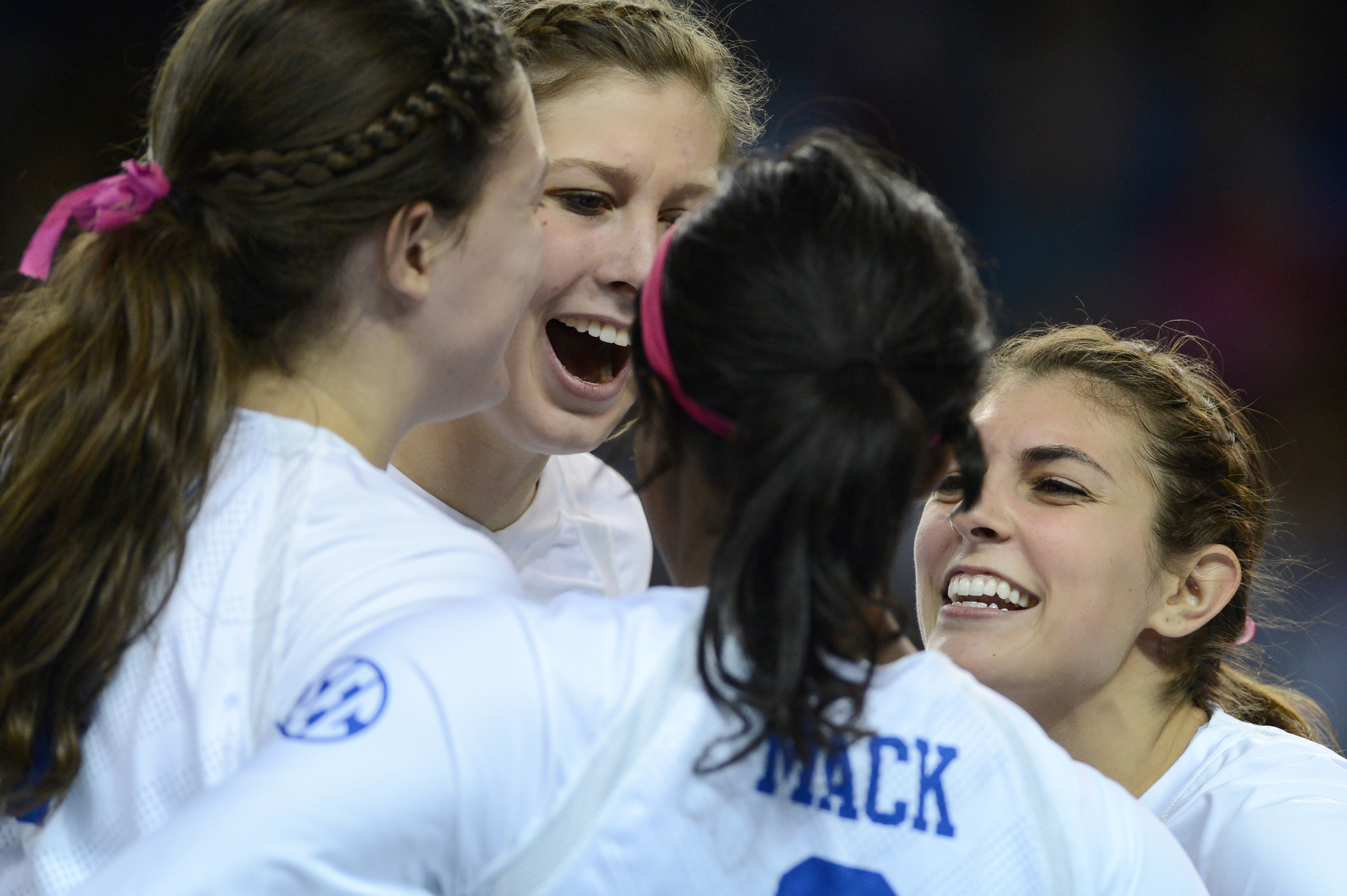 Box Score (pdf)
LEXINGTON, Ky. – The Texas A&M Aggies rallied for a 3-1 (30-28, 14-25, 25-23, 26-24) win over No. 20 Kentucky on Friday night in front of 1,638 fans on “Dig Pink” night in Memorial Coliseum. The win for the Aggies marked the first ever victory in five tries against Kentucky in Lexington in program history. UK had a valiant offensive effort with five players topping 10 or more kills on the night, but the Aggies were able to prevail with wins in the first, third and fourth sets.

With the loss, Kentucky falls to 15-7 overall on the year and 8-2 within Southeastern Conference action. Texas A&M improves to 14-6 overall and 7-2 in league competition. UK will return to action with a home contest against LSU on Sunday. First serve is slated for 1:30 p.m.

Senior setter Morgan Bergren distributed the ball at an elite level with five Wildcats topping 10 or more kills and each player registering between 22 and 38 swings. The Muncie, Ind., native logged 49 assists on the night and will enter Sunday’s match needing just eight more assists to top 3,500 for her career.

Sophomore Darian Mack led the way with 15 kills, while classmate Emily Franklin registered 13 on a squad-high .545 hitting clip. Freshman Brooke Morgan was next with 12 hammers. Sophomore Kaz Brown and junior Anni Thomasson both logged 10 apiece. Thomasson had a double-double effort as she added 12 digs. Brown paved the way at the net defensively with a match-high eight rejections.

Sophomore Ashley Dusek picked up a match-high 19 digs, while freshman McKenzie Watson added nine and classmate Olivia Dailey contributed four. Franklin had a pair of aces to lead the way from the service line.

The Aggies jumped out to a 4-0 lead to begin the match before Mack connected down the line to end the spurt. A 4-1 run by the Wildcats highlighted by a block from Thomasson and Franklin enabled the home team to tie the score six apiece. UK benefited from an erroneous attack by the Aggies and then Franklin launched her team-leading 21st ace of the year for a 9-7 lead for the Blue and White. The visitors would not go away, however, and would tie the score once again this time at 10. From there the teams would exchange points until the Aggies scored four-straight to earn an 18-14 advantage and force Kentucky into a timeout. Following the break, Mack tooled the block to end the threat. UK clawed its way back from a five-point deficit at 21-16 to finally tie the score at 24 apiece on a Franklin conversion of an overpass. Bergren flustered the Aggies off of the serve and Morgan was able to find the back corner to give UK set point. Texas A&M would fight off the set point to tie it again at 25. Bergren and Franklin connected on a quick set to once again give the Wildcats set point. The Aggies would not go away and made a miraculous save off of the block to prolong the set and then go ahead 27-26 with a kill that split the UK defense. A service error allowed the Blue and White to tie the score yet again, this time at 27. After another tie at 28, the Aggies would go on to score two-straight to finally clinch the frame by a 30-28 margin for a 1-0 lead in the match.

Brown tooled the block to open the scoring in the second stanza. Kentucky stretched the advantage to 4-1 off of a solo block from Franklin. Franklin earned her second ace of the match to increase UK’s lead to five at 8-3. Texas A&M opted to use an early timeout. Thomasson smashed one off of the defender’s hands to push UK’s lead to 12-4 midway through the second set. The lead swelled to 10 at 15-5 following a block from the duo of Brown and Bergren. The Aggies would get no closer than six as UK evened the match at one set apiece with a dominating 25-14 second set victory.

Texas A&M scored the set’s first two points, but UK charged back with a 6-0 run which included a pair of kills from Mack to earn a 6-2 edge. The lead grew to seven at 10-3 behind the combo block from Mack and Franklin and the Aggies opted for an early timeout. Bergren’s tough serving continued to benefit the Cats out of the break as the visitors couldn’t handle one enabling Mack to convert on an overpass to stretch the lead to 11-3. Brown took advantage of the block off of a slide to give the Wildcats a 17-9 lead midway through the frame. Bergren snapped an Aggie spurt with a dump to make it 19-13 in favor of Kentucky. Texas A&M continued to fight and utilized a 9-2 run to take a 22-21 lead. A block from Brown and Thomasson spelled the run to tie the score at 22 apiece. Back-to-back points from the Aggies gave the visitors set point at 24-22. Brown tooled the block to stave off one set point, but the Aggies answered with a kill to comeback for a 25-23 win and a 2-1 lead in the match.

Kills from Thomasson and Franklin enabled the Wildcats to take the early 2-0 lead. The Aggies fired back with three-straight to take the lead, but Bergren would call her own number to end the string of visitor points. From there the teams would exchange points back-and-forth until UK shook loose for two-straight to make it 11-9 in favor of the Cats. A block from Franklin and Morgan pushed the lead to three at 13-10. The Aggies pulled to within one at 15-14, but a service error enabled the home team to take a multipoint advantage once again. Brown became the fourth different Wildcat to reach double-figures in the kills’ column with her 10th hammer of the night to make it 18-14 in favor of Kentucky in search of prolonging the match. The Aggies pulled to within two at 19-17 and UK opted to use a timeout. Out of the break, Thomasson became the fifth Wildcat to register 10 or more kills to give UK a 20-17 lead late. A 6-3 run by the visitors enabled the Aggies to tie the score late at 23 apiece. Texas A&M earned match point off an erroneous attack by the Wildcats. Mack saved the Cats when she tooled the block to fight off the first set point. Texas A&M earned its second match point with a ball that dipped just inside the line in the back row and finished the win with an attack that went long for a 26-24 fourth set win and a 3-1 victory in the match.

8 – The number of assists Morgan Bergren needs to become just the fifth player in school history to amass 3,500 career assists.

5 – Players to reach double-figures in the kills’ column – a season-high mark.

1 – The first win by Texas A&M in program history