LOUISVILLE, Ky. (AP) – There were moments when top-ranked Kentucky could have blinked against No. 4 Louisville with its veterans battling second-half foul trouble and shooting woes.

The Wildcats didn’t because freshman guard Tyler Ulis stepped up with a career-best 14-point performance made more impressive by the fact he achieved it despite a bandaged right eye that made blinking difficult.

“I was more excited than nervous because it was my first away game,” said Ulis, who shook off a bloody cut to score 12 key second-half points and led the Wildcats to a hard-fought 58-50 victory over the Cardinals on Saturday.

“Being a freshman, I just wanted to see what the atmosphere felt like.”

Ulis received three stitches above the eye afterward from the inadvertent elbow from Louisville’s Chris Jones in the first half. He returned with an effort that not only helped Kentucky claim Bluegrass State bragging rights, but possibly clear its biggest hurdle toward an unbeaten season.

“We’re not going to think about it,” center Dakari Johnson said of that prospect. “We’re just going to take one game at a time.”

Karl-Anthony Towns had 10 points and nine rebounds, while Devin Booker added nine points for Kentucky, which held Louisville (11-1) to 26 percent shooting in a game defined by defense until the freshmen started making their shots.

They ended up scoring 39 points with the 5-foot-9 UIis setting the second-half tone with two big 3-pointers to give the Wildcats (13-0) a cushion.

His play was no surprise to fellow freshman Booker, who said, “well everybody’s seen it. He’s incredible. He’s showing people – you guys – things you haven’t seen out of him before, but I’ve seen it because we’ve played on camps and teams all the time, so it’s nothing new to me. He’s a real special player.”

The poised play by Kentucky’s heralded freshmen basically answered the question of how they would handle a hostile atmosphere in their first true road test before 22,812. The Wildcats also provided another example of how their length and depth can wear down an opponent.

Terry Rozier scored 15 points and Jones had 13 for Louisville, which led just once at 13-12 and couldn’t seem to make the shot it needed every time it got close.

“I think the message to our team was, we really had to win it with offense because we’re a little offensively challenged, especially from the 3-point line,” Louisville coach Rick Pitino said. “Their length is pretty incredible. … We knew that we could play good defense. It was a question of whether we could score, and the answer was we didn’t.”

This annual meeting featured more hype than usual because both entered ranked in the top five, the first time the teams had met with both unbeaten. The question was whether Louisville could provide the Wildcats’ last real competition with the Southeastern Conference not appearing to offer any obstacles.

Kentucky answered by handing the Cardinals their three straight loss in the series and seventh in eight games under coach John Calipari, who substituted one-for-one at times instead of using full platoons because of foul trouble to 7-footer Willie Cauley-Stein.

It helped Kentucky to have rookies such as Ulis and Booker.

“I like my freshmen,” Calipari said. “There are other good freshmen, but I’ll take mine. One point we played with four freshmen and (sophomore) Aaron (Harrison) for a while. I think it stretched the game out.”

Kentucky led 22-18 at the break despite committing 10 turnovers. The Wildcats didn’t make it to the foul line, either, while Louisville was 5 of 6, allowing the Cardinals to stay closer than expected. Cauley-Stein’s dunk and Ulis’ jumper gave Kentucky a 26-18 lead before Louisville scored six straight points. The freshmen took charge from there for Kentucky, combining for 16 points during one stretch to keep the Wildcats safely ahead. 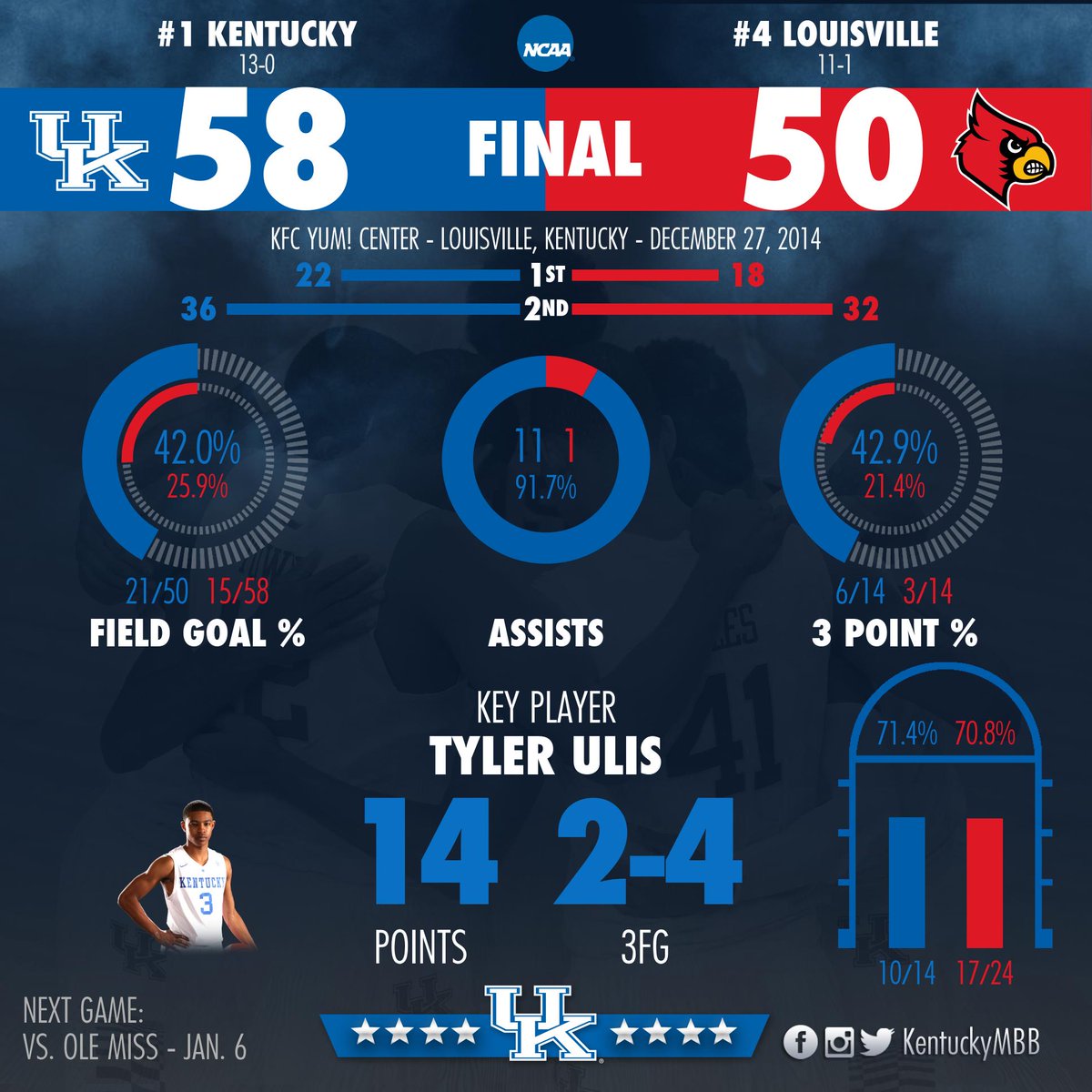