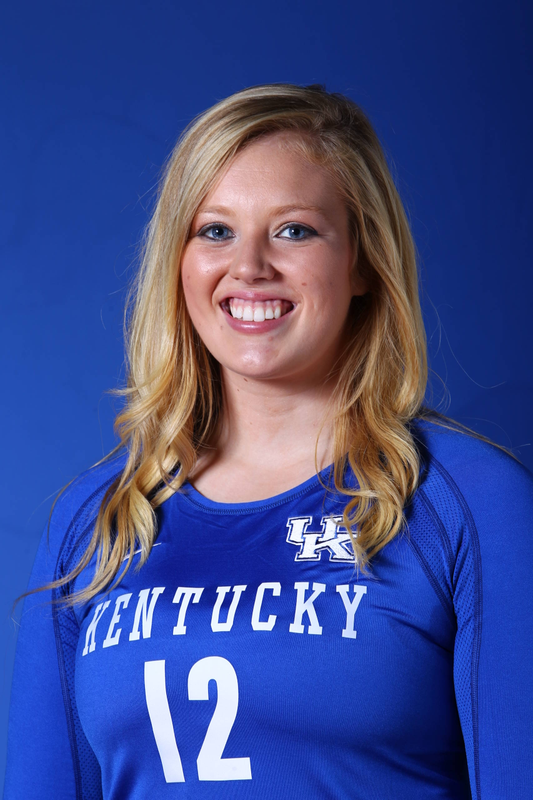 2014 (Senior): Was named Honorable Mention All-American … Earned AVCA All-Region honors and was named to the All-SEC team after a record-setting senior season … Was named SEC Player of the Week twice and earned All-SEC Academic team accolades for the fourth consecutive season … Started every match as a senior and put together one of the most explosive seasons in program history … Led the Wildcats with 379 kills, the fifth-most in a single season in program history in the 25-point rally scoring era … She added 34 aces, tied for fourth in team history, and 448.5 points, fifth in the UK record books, all in the 25-point rally scoring era … Recorded double-digit kills in 18 matches, highlighted by a four-match span where she had 39 kills on 70 attempts without a single attacking error in nearly 10 consecutive sets from Oct. 29-Nov. 9 … Had 14 kills on .452 hitting in the NCAA Tournament vs. Oakland and added three blocks, three digs and a career-high-tying one assist … Posted 16 kills at Auburn … Notched 21 kills vs. Georgia on .512 hitting with five digs to earn her second consecutive SEC Player of the Week honor … Had 11 kills on a career-high .611 hitting vs. Morehead State … Recorded back-to-back 19-kill outings, at Texas A&M and vs. Tennessee, with the 19 kills in UK’s 3-0 win over Tennessee marking a program record in a three-set match in the 25-point rally scoring era … Posted 15 kills vs. LSU with five digs and four blocks … Had a career-high 22 kills on .594 hitting at South Carolina, a program-record in a four-set match … Posted 14 kills on .444 hitting with a season-best six digs vs. Lipscomb in the second of seven consecutive matches with 12 or more kills … Tallied 14 kills, five digs and two aces at Louisville … Matched a then career-high with 18 kills vs. Northern Iowa on a career-best .607 percentage.

2012 (Sophomore):Saw action in all 33 matches, making 26 starts … Ranked third on the team with 2.65 kills per set … Struck for a career-best 321 kills on a .210 hitting clip … Reached double-figure kill tallies 19 times in her second season, while leading UK in kills on 12 occasions … Posted a career-high 18 kill performance at Florida while also notching a career-best .556 hitting clip at Ole Miss … Earned Kentucky Classic All-Tournament and MVP honors after leading UK in kills in three wins … Logged double-figure kill efforts in all three victories … Led UK with 13 kills at Louisville … Tallied 14 kills on a .542 hitting clip in the win over Western Carolina … Banged out 12 kills in a win at Texas A&M … Had a team-high 11 kills in the upset of No. 25 Tennessee … Totaled a team-high 11 kills on .556 hitting at Ole Miss … Led Kentucky with 18 kills at Florida and a .421 hitting percentage … Pounded out a team-high 12 kills with four blocks over Texas A&M … Put down 14 kills and a .281 clip in a sweep over LSU … Totaled 12 kills in a win at Tennessee … Tallied 14 kills in win over Georgia … Had 12 kills and four blocks in a win over Ole Miss … Had 12 kills and hit .455 for the match in win over USC … Added 10 kills and two aces in loss at Arkansas … Had a team-high 14 kills in a win over Georgia … Struck for a team-high 16 kills on .342 hitting while adding four blocks in a win over Ohio State.

High School: Enrolled in the spring and participated in spring practice … Five-year letterwinner for Scott High School … Became the first player in school history to attain 1,000 career kills … Owns school records for kills, aces, digs and blocks … Among the top-35 players in the nation according to PrepVolleyball.com … Tabbed an All-State selection as a senior … Named the Cincinnati Enquirer Player of the Year in each of her final two seasons … Played for the Northern Kentucky Volleyball Club and helped lead her squad to a top-15 finish as the AAU National Championship in 2010 … A member of the United States A2 High Performance Team and an alternate for the US Youth Olympic team … National Honor Society member and served as the vice president … Also was a five-year member of the Student Council, also serving as vice president … Four-time dean’s list member.