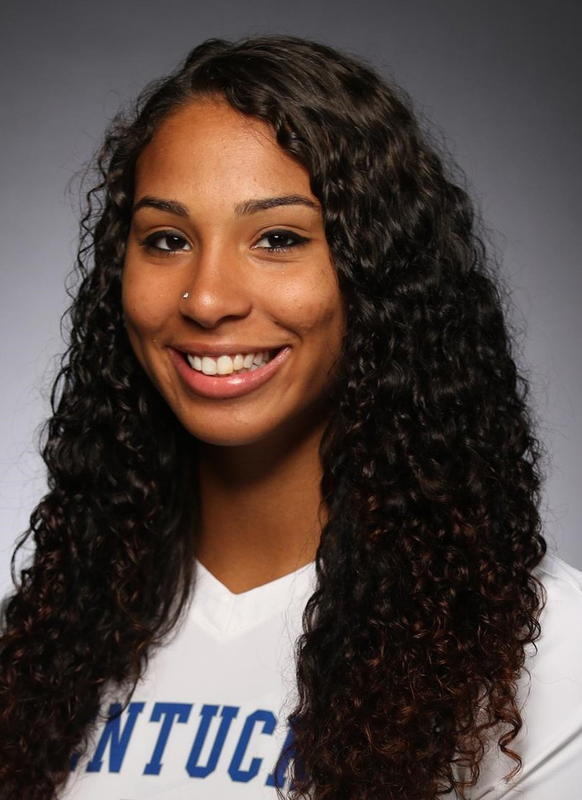 2017 (Senior): AVCA Honorable Mention All-America … AVCA All-Southeast Region … All-SEC team member … Won SEC Co-Defensive Player of the Week award once … Member of Bluegrass Battle All-Tournament team … Preseason All-SEC team member … Had a .408 attack percentage, her career best and the second best in the 25-point rally scoring era … Recorded 21 solo blocks, her career high and the second most in the 25-point rally scoring era … Led the team in blocks with 146 … Broke career 25-point rally scoring era in total blocks (576) block assists (512) and solo blocks (64) … Averaged 1.24 blocks per set, the fourth best in the SEC and ranked 49th in the nation … Her hitting percentage of .408 was the second best in the SEC and 12th in the nation … 37th in the country in total blocks at 147 … Had 12 matches with 10 or more kills … Produced 12 matches with five of more blocks … Recorded 39 kills and 26 blocks in NCAA tournament … 289 kills ranked third on the team … Led Kentucky in blocks 24 times, hitting percentage 10 times and kills once … Won SEC Co-Defensive Player of the Week after six blocks and 13 kills against Tennessee … Recorded a season high and a SEC career high of 18 kills against Ole Miss (11/19) … Had a season high eight blocks at Alabama (11/8) … Notched 14 kills on 18 swings in second round of NCAA Tournament against WKU (12/2) … Recorded nine blocks in NCAA Tournament in back-to-back matches against WKU (12/2) and BYU (12/4) … Added 16 digs and three assists in 2017 campaign.

2016 (Junior): AVCA All-Southeastern Region … All-SEC Team … Two-time SEC Offensive Player of the Week … Member of the 2016 Preseason All-SEC Team … Her 151 blocks ranks second in a single season during the 25-point rally scoring era … Had a .362 attack percentage, the best during the 25-point rally scoring era and fifth-best in a single season in UK history … Recorded 20 block solos, the second most during the 25-point rally scoring era … Her 151 blocks led the team in 2016 and were the second most during the 25-point rally scoring era, trailing her 2015 performance … Averaged 1.42 blocks per set, good for 15th in the nation and third best in the SEC … Recorded 11 matches with 10 or more kills and 13 matches with five or more blocks … Second on the team in kills at 273, averaging 2.58 kills per set … Named SEC Offensive Player of the Week after recording a combined 25 kills against Georgia and Mississippi State … Earned SEC Offensive Player of the Week honors after posting 11 kills on just 14 swings for an .643 hitting percentage against Arkansas … Recorded a season-high 17 kills with an .800 hitting percentage against South Carolina … Had two double-digit block matches, one against Virginia and one at Auburn … Led the team in hitting percentage 13 times and blocks 16 times … Notched nine kills on 17 swings in the second round of the NCAA Tournament at Washington … Earned 10 total blocks in the NCAA Tournament against Colorado State and Washington … Added 11 digs and four assists during the 2016 campaign.

2015 (Sophomore): AVCA All-Southeastern Region … All-SEC Team … SEC Player of the Week (10/26) … Two-time SEC Defensive Player of the Week (9/21, 10/26) … Named to Bluegrass Battle and Shocker Volleyball Classic All-Tournament teams … Started in every match, playing 112 total sets … Finished season ranked No. 3 in the country in blocks per set, averaging 1.61 with 180 total … Her 160 block assists ranks second in a single season and most ever during the 25-point rally scoring era … Her 180 blocks shattered former record for most single-season blocks during the 25-point rally scoring era by 40 …. Her 20 block solos ranks second most in a single season during the 25-point rally scoring era, two shy of tying the record … Led the team in blocks on 23 occasions … Recorded five or more blocks in 18 matches, while charting eight or more blocks in 12 matches … Averaged 1.71 blocks per set in SEC play, pacing the league … Ranked second on the team in total points with 406.0 … Ranked second on the team with 306 kills … Led team in kills in 10 matches … Recorded 10 or more kills in 16 matches … Posted a career-high 20 kills and added six blocks in season opener against Michigan State (8/28) … First middle blocker to record a double-double since 2007 with a 10-kill, 13-block outing, guiding UK to a 3-1 win over Louisville (9/20), resulting in her first SEC Defensive Player of the Week honor … Recorded second career double-double in regular season finale with 13 kills and 11 blocks against Auburn (11/27) … Named SEC Defensive Player of the Week and Player of the Week following 18 kills on .400 hitting and 14 blocks in two sweeps of LSU (10/22) and Georgia (10/25) … Bluegrass Battle MVP after 43 kills and 13 blocks in three matches to start the season (8/28-8/29) … Notched six kills, two blocks, a dig and an assist in the NCAA tournament first round matchup with American (12/4) … Added 12 digs and three assists on the season.

2014 (Freshman): Was named to the All-SEC Freshman team after she posted 147 kills on .347 hitting with a team-high 98 blocks and 10 digs in her first season as a Wildcat … Played in 29 matches with 27 starts … Led UK in blocks 13 times and posted five or more rejections on eight occasions … In her NCAA Tournament debut, recorded a career-best 10 kills on .600 hitting with four blocks vs. Oakland … Notched a career-high-tying eight kills with a team-best six blocks vs. Arkansas, her third consecutive match with at least seven kills … Tallied eight kills with a team-high six blocks, one assist and one dig at Mississippi State … Had seven kills and five blocks vs. Missouri, with eight kills and five blocks in UK’s next match at Ole Miss … Posted eight kills and five blocks in back-to-back matches, at Georgia while hitting a career-best .667 and vs. LSU, hitting .500 … Logged a career-high and team-best eight blocks at Tennessee … Had a career-high four digs, three kills, two blocks and one assist in her career debut vs. Wichita State.

High School: Competed for Cedar Falls High School and the Six Pack Volleyball club … Holds the school record for kills, kills per set, kill efficiency, blocks and blocks per set … Was a four-time All-Metro and All-Conference honoree … Ranked as the No. 23 rated player by Prep Volleyball …. Led Class 5A in blocks and blocks per set and was selected to Iowa’s Senior All-Star Classic … Helped lead the Six Pack 16’s to a USAC national title in 2012 and was named MVP of the All-Tournament team … Was an Honor Roll student.