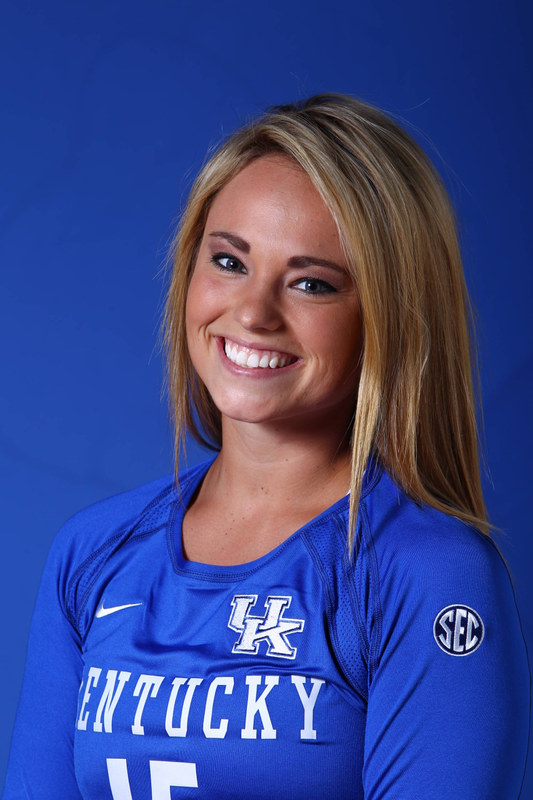 2014 (Senior): Was named the SEC Libero of the Year and earned AVCA Honorable Mention All-America and AVCA All-Region honors along with being named to the All-SEC team after a record-setting senior season … UK’s libero in every match, she earned a program-record four SEC Defensive Player of the Week accolades and posted a team-best 537 digs, third in program history in the 25-point rally scoring era … Was named to the All-SEC Academic team for the fourth consecutive season … Posted 10 or more digs in all but four matches, had 15 or more digs in 22 matches and posted 20 or more digs on 10 occasions and led UK in digs 30 times … Posted 15 or more digs in the final five matches of the season, including 22 in the NCAA Tournament vs. Oakland and 18 in the NCAA’s second round vs. Ohio State … Had 20 digs, eight assists and two aces at Auburn … Tied a career high with 26 digs vs. Georgia with four assists and was rewarded with her fourth SEC Defensive Player of the Week accolade … Posted 20 digs and a career-best nine assists at Texas A&M … Earned Defensive Player of the Week honors after a 15-dig, four-assist showing vs. Alabama, followed by a 16-dig, six-assist performance vs. Texas A&M … Had 24 digs with three assists vs. Xavier … Posted a career-high 26 digs in back-to-back matches, at Louisville and at North Carolina and was named SEC Defensive Player of the Week for the first of two consecutive weeks … Notched 23 digs and four assists with the first of five kills on the season vs. Northern Iowa.

2013 (Junior): Earned All-SEC Academic team honors … Started at libero in all 31 matches for UK … Led the team with 443 digs for a 3.99 digs per set rate along with 111 assists, the second highest total on the team and 15 service aces … Had 21 digs in the NCAA Tournament vs. Michigan State … Led UK with 20 digs against Florida … Had 17 digs and four assists against Texas A&M … Notched 20 digs with one kill at Mississippi State … Recorded 22 digs against LSU … Registered 20 digs with two service aces and three assists at Arkansas … Posted 16 digs with five assists and a service ace against Mississippi State … Led UK with 15 digs at Florida … Notched a kill and 16 digs vs. Tennessee … Had 18 digs and a career-high-tying two service aces against Ole Miss … Recorded a kill and eight digs at Alabama … Had 16 digs and a service ace at Auburn … Posted 16 scoops vs. Morehead State … Led UK with 11 digs at Lipscomb … Had a career-best 24 digs with one service ace against Minnesota … Logged 15 digs in a win over Louisville … Posted a career high nine assists, tied a career high with one kill and had 19 digs against VCU … Recorded seven assists at Long Beach State St. … Posted 10 digs vs. Illinois.