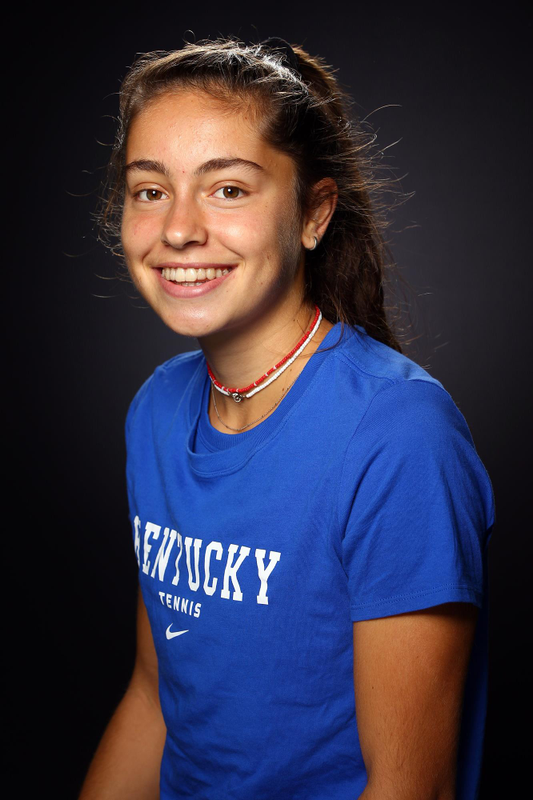 Sophomore (2021-22)
Posted an 11-9 mark in singles competition during the spring season, including a 9-3 record in the nonconference schedule … Had SEC victories over Vanderbilt’s Amy Stevens and LSU’s Taylor Bridges … Earned the clinch for Kentucky over East Tennessee State in the season opener with a win against Maria Fernanda Carvajal … Teamed up with Ellie Eades for a 4-4 record in doubles on court one as the pair was ranked as high as 27th on April 13 … Had two top-40 victories with Eades in doubles over No. 15 Daria Kuczer/Tenika McGiffin and No. 38 Sarah Hamner/Megan Davies of South Carolina … Began the season paired with Florencia Urrutia, tallying a 7-3 mark together … Notched ranked wins with Urrutia over No. 27 Laura Masic/Lara Sschneider of Indiana and No. 43 Brindtha Ramasamy/Laura Rico of Miami Ohio … Clinched the doubles point with Urrutia on two occasions versus Miami Ohio and Southeast Missouri State and once with Eades against South Carolina … During the fall season, teamed up with Lidia Gonzalez to post a pair of doubles victories at the June Stewart Invitational … Advanced to the Round of 16 at the ITA Regional Championships in singles, also qualifying for the Round of 16 with doubles partner Gonzalez … Picked up a doubles win with Ellie Eades at the Tennessee Invitational and a singles win at the Miami Invitational.

Freshman (2020-21)
Earned All-America honors after earning the No. 1 seed in the doubles draw along with teammate Akvile Parazinskaite … Following a stellar first year as a Wildcat, was named to the All-SEC First Team along with Parazinskaite, the first time since 1987 that UK has had two players tabbed to the first team by the league in the same season … Also landed on the All-SEC Freshman Team, the first UK freshman since 2016 and the sixth freshman in program history to earn the honor … Became just the third UK player to earn both First Team and Freshman Team distinctions in their first season … Also named to the SEC First-Year Academic Honor Roll … Recorded an 11-5 record during the regular season in singles competition, including wins against SEC foes Jessica Anzo (Texas A&M) and Allie Gretkowski (South Carolina) … Began the season at 8-0 in singles play with wins over East Tennessee State, Memphis, Miami Ohio, Cincinnati, Middle Tennessee State, Marshall, WKU, and Notre Dame … Paired with Parazinskaite, the dynamic duo amassed a 21-5 overall doubles record on the season, including a 7-4 mark against ranked opponents … Entered the NCAA Doubles Championships as the No. 1 overall seed, the first duo to have such ranking under UK head coach Carlos Drada … Defeated No. 24 Wake Forest’s Brooke Killingsworth and Anna Brylin 5-7, 6-3, 10-4 in the opening round of the NCAA Doubles Championships before falling to UCLA in the Round of 16 … Posted a thrilling 6-4, 4-6, 6-4 victory over Syracuse’s Polina Kozyreva to secure UK’s win in the NCAA Opener before dropping a 6-1, 6-1 decision to Cal’s Anna Bright in the NCAA Second Round… Combined with Parazinskaite to defeat No. 20 Alexa Bortles and Anna Vrbenska of Ole Miss in the second round of the SEC Tournament before falling to No. 8 Katrina Jokic and Ariana Arsenault of Georgia in the SEC Quarterfinals … Competed in a team-high six matches at the Bulldog Invitational during the fall season … Teamed up with Parazinskaite to defeat Auburn and Vanderbilt in doubles competition at the June Stewart Invitational in the fall.