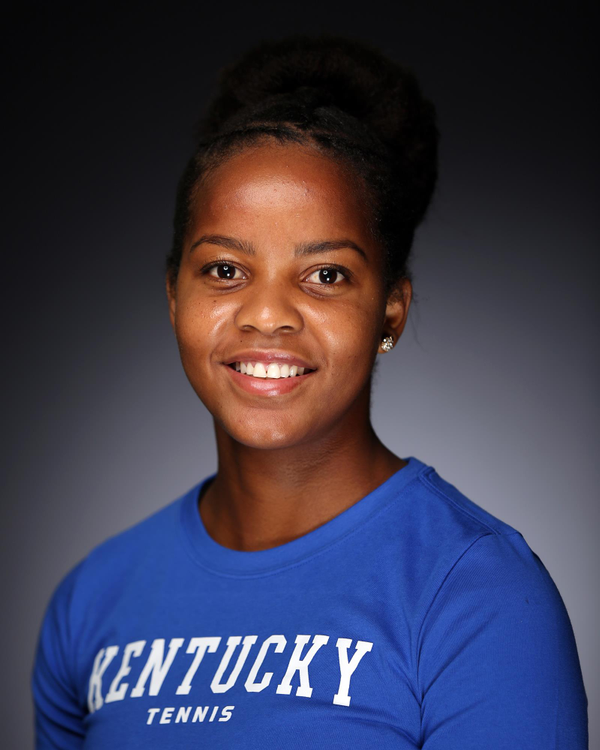 R-Senior (2020-21)
Named to the SEC Academic Honor Roll … Landed on the ITA Scholar-Athlete list … Recorded an 11-5 singles record during the regular season, including a 7-3 mark in the SEC … Had singles wins against Memphis, Notre Dame, LSU, Alabama, Arkansas, Vanderbilt, Texas A&M, Tennessee, and Mississippi State … Defeated Syracuse’s Guzal Yusupova 6-3, 6-3 in the first round of the NCAA Championships … Took down Cal’s Julia Rosenqvist 2-6, 6-0, 6-3 in the second round of the NCAA Championships … Went 7-0 in doubles action with teammate Salsa Aher to begin the season, posting wins over East Tennessee State, Memphis, Miami Ohio, Cincinnati, Middle Tennessee State, Marshall, WKU, and Notre Dame … Amassed a 6-5 doubles record with Anastasia Tkachenko with victories over SEC rivals Alabama, No. 36 Missouri, No. 27 Texas A&M, No. 19 Tennessee, and No. 15 Florida … Went 3-0 when paired with Elizabeth Stevens in doubles play, with a 6-4 win over Kelsey Mize and Tereza Janatova of Ole Miss in the second round of the SEC Championships … Teamed up with Stevens for a  6-4 win over Miranda Ramirez and Guzal Yusupova of Syracuse in the opening-round match of the NCAA Championships … Had a singles win over Alabama and a pair of doubles victories against Mississippi State and Alabama during the SEC Challenge, in addition to winning a match over South Carolina at the Bulldog Invitational, during the fall season.

R-Junior (2019-20)
Named to the SEC Academic Honor Roll … Put together a 6-4 singles record and a 10-1 doubles record during fall action … Paired with Akvile Parazinskaite all fall, the duo won the main doubles draw at the Baylor Invite and the Ohio Valley Regional Championships, earning a bid to the 2019 ITA Fall Nationals … It marked her second Ohio Valley Regional Doubles Championship in her career … The pair went on a 9-0 run together before entering the Fall Nationals … The duo defeated their opponents in the first round (Round of 32) at Fall Nationals, taking down No. 20-ranked Alexa Graham and Sara Daavettila of UNC (7-6 (6), 7-6 (5), but the UK duo lost in the Round of 16 to the No. 1 seed in the tournament in Anna Rogers and Alana Smith of NC State … Earned an at-large bid to compete at Fall Nationals in singles, lost her main draw and consolation matches … During the dual season, Jacobs put together an 8-3 singles record, including a perfect 3-0 singles record in the conference … Jacobs played on the second singles court during all of the regular season, before moving up to the No. 1 singles court for conference action (therefore her 3-0 conference singles record was also on the No. 1 singles court) … Meanwhile, in her last singles match of the season, she defeated her first ranked opponent of the season, ousting then-No. 83 Taylor Russo of Auburn on the first court, 6-4, 6-2 … Jacobs was just as successful in the doubles competition during the dual season, owning an 11-1 doubles record, including a perfect 4-0 doubles record in the conference … Jacobs was most successful when paired with senior Anastasia Tkachenko during the dual season, posting an 8-1 record and a 4-0 mark in the league, playing on the second and third courts … The pair owned a five-match win streak before the season ended … Season was cut short on Thursday, March 12 due to the COVID-19 public health threat… Selected to the 2020 SEC Community Service Team … Named to the SEC Spring Academic Honor Roll.

R-Sophomore (2018-19)
Named to the SEC Academic Honor Roll … Played in the No. 2 and No. 3 singles post during the dual season, racking up a 5-7 mark on No. 2 and a 7-2 mark on No. 3, recording a 12-9 overall record and a 5-6 record in the league … Jacobs recorded one ranked win, defeating No. 100 Jayci Goldsmith at No. 29 Texas A&M on a 6-3, 7-6 (3) decision on No. 2 … In the midst of the season, Jacobs held an eight-match win streak between courts Nos. 2 and 3, from January to March … In doubles, Jacobs notched an 18-6 mark… Jacobs began the season paired with freshman Tiphanie Fiquet on doubles court No. 2, and the pair won 11 straight matches to start the season for the best win streak on the team this season in doubles and tying the best in singles … Paired with Fiquet, the doubles team reached No. 76 in the ITA/Oracle National Doubles Rankings … Near the end of the season, she began pairing up with junior Anastasia Tkachenko and the pair recorded a 5-2 overall mark and 4-1 mark in the conference … Named to SEC Spring Academic Honor Roll and ITA Scholar-Athlete.


R-Freshman (2017-18)
Named to the SEC Academic Honor Roll … Played primarily at the No. 5 singles spot throughout the dual season … Compiled an overall singles record of 16-10, including a 7-3 record in the fall season … Earned a ranked singles win over NC State’s No. 61 Claudia Wiktorian, 6-3, 7-5 … Started teaming up with Emily Fanning toward the end of the dual season, compiling a 4-1 record on the No. 1 doubles court including a 3-1 record vs. ranked foes … Highest ranked doubles win came against LSU’s No. 36 Eden Richardson/Jessica Golovin, 6-2 … Named to SEC Spring Academic Honor Roll.

Prior to UK
The No. 1 player in Africa for the U-18 level … Silver medalist at the 2015 Youth Commonwealth Games in Kentucky … The best female tennis player in the African country of Namibia … Won one women’s 10K futures event … Entered college ranked at No. 893 in the WTA World Rankings … Picked Kentucky because of the teammates and the coaching staff.