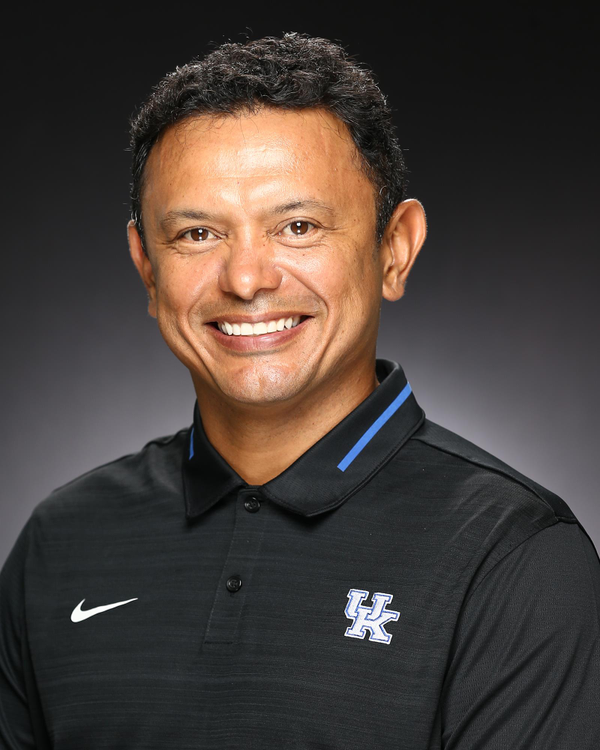 The 2022-23 season marks Carlos Drada’s 18th year as the head coach of the University of Kentucky women’s tennis program, and his 22nd season overall in Lexington. A former standout for the Wildcats, Drada helped build the program as an assistant before taking over the reins in 2006.

Kentucky completed the 2021-22 season with a 13-15 (.464) overall record. The Cats were 11-8 at home with victories over opponents such as Penn State, Western Kentucky and Indiana. UK found a victory against conference opponent LSU in the Southeastern Conference Tournament as well.

The Wildcats concluded the 2020-21 slate with a 16-9 (.640) overall record and a 6-7 (.462) mark in the SEC. The season was one for the record books, as Akvile Paražinskaite and Fiona Arrese were named All-Americans after earning the No. 1 seed in the doubles draw for the NCAA Championships. The duo was the SEC’s automatic qualifiers in the 32-team doubles tournament and were the first Wildcats to be ranked No. 1 since Mami Adachi and Aldila Sutjiadi in 2016, and the first under Drada.

Other highlights of the 2020-21 campaign include earning an NCAA bid for the seventh straight year, upsetting No. 19 Tennessee, Elizabeth Stevens earning SEC Freshman of the Week honors on March 10, and Carlota Molina being named SEC Newcomer of the Week on March 3. UK was once again named an ITA All-Academic Team for the third consecutive year in 2021 after posting a team-wide 3.583 GPA, and eight players were named ITA Scholar-Athletes to tie the program record with Paražinskaite earning the honor for the third straight year. Lesedi Jacobs was also once again named to the SEC Community Service Team, just the second UK player to do so in back-to-back years.

Although the 2019-20 season was cut short due to the COVID-19 pandemic, the Wildcats finished with a 9-6 (.600) overall mark and a 2-2 record in SEC action, highlighted by No. 39 UK mounting a 4-3 upset against No. 27 Texas A&M in the conference and home opener. UK was named an ITA All-Academic Team for the second-straight year after posting a 3.594 GPA, with four individual players earning ITA Scholar-Athlete honors. Additionally, Jacobs was inducted into the Frank G. Ham Society of Character and was selected to the 2020 SEC Community Service Team.

Under Drada’s watch in 2018-19, Mikulskyte was named SEC Player of the Week twice and earned All-SEC First Team honors. In addition, four athletes earned SEC Spring Academic Honor Roll recognition, Parazinskaite was named to the SEC Community Service Team for the second straight year and she earned the Frank G. Ham Society of Character award by the UK Athletics Department.

Drada led Kentucky to a 14-11 overall record in 2018. Closing conference play with a 6-7 record, the Wildcats T-7th in the SEC, their second-best finish in five years. Kentucky women’s tennis also ended the regular season ranked 24th in the country, according to ITA Rankings. The Wildcats earned a bid to their fifth-consecutive NCAA Tournament, falling to Kansas State in the first round (4-3).

In 2017, Drada led the Wildcats to one of their most successful campaigns during his tenure. With a 17-9 overall record and a 7-6 mark in conference play, the Wildcats advanced to the second round of the NCAA Tournament and ended the season at No. 18 in the ITA Rankings for their first top-20 finish since 2006. The Wildcats finished fourth in the SEC, their first top-five finish in the league since 2006.

The 2017 season also saw the duo of Mami Adachi and Aldila Sutjiadi earn their second consecutive All-America honors, finishing the season ranked No. 4 in the nation after advancing to the quarterfinals of the NCAA Doubles Championship for the second consecutive year. In the fall season, the pair won Kentucky’s first-ever national championship, winning the Oracle/ITA Intercollegiate Indoor Championships doubles title.

In 2016, Drada led the Wildcats to an 18-10 overall record and a 6-7 mark within the SEC.  UK advanced to the second round of the NCAA Tournament after making a postseason appearance for the third straight year. He also saw UK’s first All-Americans since the 2007 season in Adachi and Sutjiadi, who finished the 2016 campaign as the top-ranked doubles team in the nation. Sutjiadi also finished with a No. 36 singles ranking and appeared in the NCAA Singles and Doubles Tournament, while picking up First Team All-SEC honors, a first for a Wildcat since 2007. Adachi and Sutjiadi became the first pair since 2006 to advance to the semifinals of the NCAA Tournament. The Wildcats also succeeded in the classroom, as the team was named an ITA All-Academic Team for the fourth-straight year while Sutjiadi was named the recipient of the Elite 90 (formerly Elite 89) Award for the second consecutive season.

Drada’s first squad, in 2006, posted a 19-10 overall record and made a fifth consecutive appearance in the Sweet 16 round at the NCAA Championships and making a run to the SEC Tournament title match for the second consecutive year.

In 2007, Drada guided another youthful squad that played three freshmen and two sophomores to a 19-8 overall record, one win shy of the program’s third 20-win season in five years. He coached seniors Kim Coventry and Joelle Schwenk to ITA Doubles All-America honors, the ninth and 10th athletes in school history to earn All-America distinctions.

In 2008, Drada took a team of three sophomores, three freshmen and only one junior to a top-25 finish. The squad overcame adversity and injury during the season to finish 16-10 and the program’s 12th consecutive NCAA tournament appearance.

In 2009, Drada led the Wildcats to a 9-0 mark to start the season, including the program’s second win over Florida in school history. The Wildcats defeated six teams ranked in the top-50 overall, including upsets of No. 14 Clemson and No. 17 Alabama. By season’s end UK had earned it’s 19th NCAA Tournament bid while finishing with a No. 25 ranking.

Drada found great success while coaching Coventry, who reached the NCAA Singles Championships as well as the NCAA Doubles Championships with partner Carolina Escamilla. Coventry was one of just three SEC Players to appear in both the singles and doubles draws while finishing the year ranked 50th nationally. It wasn’t just Coventry earning accolades as Drada guided each of UK’s top six singles players to All-SEC honors, led by Schwenk, who earned first-team honors.

During his tenure at UK, Drada has also shown himself to be a dynamic recruiter, hauling in the nation’s fourth-ranked recruiting class in 2007. Each freshman of the 2008 squad was named a five-star recruit by TennisRecruiting.net.

The success as a head coach is no surprise as Drada was tabbed the 2005 ITA National Assistant Coach of the Year in his final season as an assistant coach to former head man Mark Guilbeau. That year, Kentucky enjoyed its finest season in school history, winning the SEC Championship for the first time while advancing to the NCAA quarterfinals. The Wildcats were also the National Indoor Championships runner-up. The 2005 squad won a school-record 26 matches.

The year capped a great four-year run for Drada as an assistant coach. After taking over in 2002, he helped UK to three straight round of 16 appearances before the quarterfinal run in 2005. Prior to that season, the Wildcats had advanced that far in only eight seasons. Since his involvement with the program, the team has finished in the country’s top-20 five out of seven seasons.

A native of Cali, Colombia, Drada joined UK’s staff following a highly successful career that culminated with a runner-up finish at the 2000 NCAA Singles Championships. Drada also brings a wealth of experience that comes from playing for an elite tennis program that competed in the SEC and the NCAA Championships, allowing him to better relate to student-athletes about what it takes to compete at such a high level.

As a member of the Kentucky men’s tennis team, Drada compiled a record of 91-56 in singles competition. He was named All-American in 2000 after making an improbable run to the NCAA singles title match before falling to Stanford’s Alex Kim. The unseeded Drada blazed through the competition defeating both the No. 1 seed Jeff Morrison of Florida, who was the defending national singles champion, and No. 3 seed Shuon Madden during his run. It marked the second time Drada had beaten the nation’s No. 1 player, accomplishing the same feat in his junior year. That year he defeated top-ranked James Blake of Harvard.

Drada made Lexington his permanent home in 2000 after graduating with a degree in finance/marketing. He accepted a job with Merrill-Lynch as a financial consultant, where he worked for a year, before returning to the sport he loves to begin his coaching career.