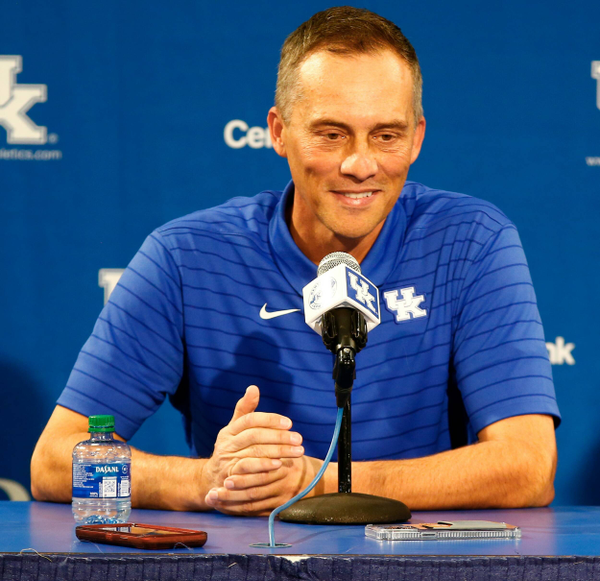 “We are very excited for Troy Fabiano to lead our women’s soccer program. His winning history and number of championships are extraordinary,” said Barnhart. “His methodical, organized, and consistent approach are hallmarks of his ability to develop outstanding players and teams that excel on and off the pitch. We are confident Troy will build a winning program here and we welcome his wife and their children to the UK Athletics family.”

Fabiano arrives in Lexington after having spent seven years as the head women’s soccer coach at the University of Wisconsin-Milwaukee. During his time with the Panthers, he compiled an impressive overall record of 101-16-13 (.827) with a 58-2-4 (.938) mark in Horizon League play.

“I am extremely excited to join the UK Athletics family and lead the women’s soccer program while creating a culture of excellence here in Lexington,” said Fabiano. “Everyone I have met throughout this entire process has been incredible and genuine, and I cannot thank Mitch enough for affording me this opportunity. I am eager to meet the team and begin developing an environment that’s competitive in the SEC and on the national stage.”

Milwaukee claimed six conference regular-season titles from 2015-21 with Fabiano at the helm, including five seasons of going undefeated in conference action. The team was also crowned the Horizon League Tournament champion in 2018, 2019, 2020, and 2021. Following the Panthers’ stellar 2021 campaign, Fabiano picked up his sixth Horizon League Coach of the Year honor.

Players continuously earned conference and national accolades during Fabiano’s tenure. In total, 23 student-athletes landed on the All-Horizon League First Team, 15 on the Second Team, and 11 on the All-Freshman Team after he took over in 2015. Additionally, 10 Panthers earned major Horizon League awards. Seventeen players were also named to United Soccer Coaches All-Region teams, including seven on the First Team. Fabiano also coached one All-American, the program’s first since 2011.

Milwaukee punched its ticket to the NCAA Tournament for the fourth consecutive year in 2021 under Fabiano’s direction. The Panthers defeated No. 14 Xavier in the first round, advancing to the second round for the second-straight year and fifth time in program history. The 1-0 decision also gave Milwaukee its fourth-ever victory over a nationally-ranked opponent. The win over the Musketeers marked Milwaukee’s 19th win of the 2021 campaign, tying the school record for victories in a given season.

With Fabiano at the helm, the Panthers went 1,617 days between regular-season conference losses from September 2016 to March 2021. That impressive stretch included a Horizon League record 36-game unbeaten streak — which was also the longest active streak in the NCAA when it came to an end — and the team also experienced a 31-match unbeaten streak at home in regular-season play during that time. Prior to the Fabiano era, the school-record unbeaten streak sat at 13.

Between 2017-21, Fabiano led the Panthers to a ledger of 77-7-7 – the best win-loss record of any team across NCAA DI soccer during that five-year span.

During his first year in 2015, he quickly turned around a program that won just six games the year prior to his arrival. He nearly doubled that win total, with the Panthers finishing 11-3-4 overall, including an unbeaten 8-0-1 mark in league play that included the regular-season crown. Fabiano also led Milwaukee to a 16-0-4 mark as the nation’s lone undefeated squad in 2018.

Just as they have on the pitch, the Panthers have experienced success in the classroom under Fabiano’s leadership. Since 2015, 14 student-athletes have garnered Horizon League All-Academic Team accolades while nine Panthers have been named to CoSIDA All-America teams. Twelve players were named to USCA Academic All-America squads while Milwaukee was named an USCA Academic Scholar Team all years with Fabiano at the helm.

Prior to his stint at Milwaukee, Fabiano spent 17 years as the head women’s soccer coach at the University of Wisconsin-Parkside where he boasted a 222-74-29 (.728) and 141-39-22 (.753) record. The Rangers had 16 consecutive winning campaigns, saw eight NCAA DII Tournament appearances, and clinched five Great Lakes Valley Conference championships in his tenure.

He was also a three-time GLVC Coach of the Year honoree and was named the Midwest Region Coach of the Year in 2008, 2010, and 2014 while at UW-Parkside. He coached seven All-Americans during his time with the Rangers, including a Capital One Academic All-American First-Team selection in 2014.

Fabiano began his coaching career as the men’s assistant at Robert Morris University — his alma mater — before serving as the interim head men’s coach at Eastern Illinois University. He was the women’s assistant coach at UW-Parkside for one season before being elevated to head coach.

While a student-athlete at Robert Morris from 1990-93, Fabiano was twice named to the All-Northeast Conference First Team. He was honored as the league’s Player of the Year as a senior after guiding the Colonials to their first NCAA Tournament appearance, establishing himself as the team’s leading goal scorer in 1992 and 1993.

He capped off his senior year at 10th in the nation in scoring with a conference-best 19 goals and 43 points, with both those totals currently ranking second in RMU’s history book for single-season records. Fabiano, who was inducted into the RMU Athletic Hall of Fame in 2001, ranks third in the program’s record book for tallying 39 goals and 95 points in his career.

A native of Kenosha, Wisconsin, Fabiano and his wife, Melissa, have three sons: Stefano, Marco, and Nico.