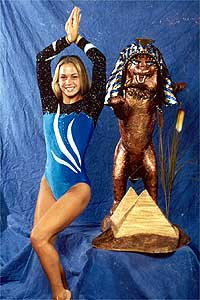 Coach Little on Nicole
“In her first year, she really exceeded our expectations. Now a senior, her experience will help us when we get to a more competitive level. Her consistency and presentation will help her earn a spot in the lineup.”

2002 Season: Was a regular in the bars and floor lineups? Season-high 9.725 on bars came against Florida (1/18/02)? Scored a season-high 9.800 on floor at the Bahama Breeze Invitational (1/11/02)? Named a PNC Bank Student-Athlete of the Week? Finished season with highest grade point average on the team? Member of the SEC Academic Honor Roll… Named to the Verizon Academic All-District IV first team.

2001 Season: Received a scholarship for her junior year and responded with career highs on the bars, beam and floor… Top marks on floor (9.850) and bars (9.775) came in win over Illinois (2/10/01), while her best mark of 9.850 on beam tied her with teammate Aronda Primault for third in near upset at Alabama (2/24/01)… Her average of 9.660 was good for third on beam… Named to the Verizon Academic All-District IV first team and inducted into the prestigious UK Society of Character… Also named an NACGC/W Academic All-American.

Did You Know?
Favorite Foods: Steak, Chocolate, Crablegs, Ice Cream
Favorite Book: Summer Sisters by Judy Blume
Favorite Movie: The Sixth Sense
Favorite Musical Artist: Dave Matthews Band
Favorite Apparatus: Floor
Not many know this about me: I’m a daddy’s girl.
Pet Peeves: Tardiness and laziness
In my spare time I like to: Bum around and eat ice cream; or workout!
If I was on Fear Factor, this would be my biggest fear: The Dark
The teammate or staff member I would use as a lifeline on “Millionaire”: Karla Adelt
If I could have dinner with three famous people, they would be: Al Pacino, Robert DeNiro and Keanu Reeves
If I was not competing in gymnastics, the other sport I would play: I would be a famous NFL player!
Best present I ever received: The love and support from my family!
The moment in my life when I was most proud: When I earned a Division I scholarship.
The one thing I like most about gymnastics: Competing as a team.
Why UK? The coaches and the facilities, including the Center for Academic and Tutorial Services