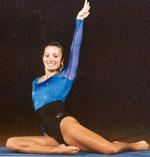 2003 Season: Continued to improve on the uneven bars and floor exercise… Scored a career-high 9.850 on floor against BYU (1/31/03)… Improved average scores on bars and on floor from 2002 season.

Pre-College: Captured the floor exercise, balance beam and all-around titles at the 1999 Georgia Level 10 competition, while claiming second on the uneven bars and vault… Finished fourth on the floor exercise at the 1999 Level 10 Regionals… 1998 and 2001 Level 10 state all-around champion… Member of the 1996 Atlanta Olympic Exhibition Team… Graduated fourth in her class at Brookwood High School and was a member of the National Honor Society.

Did You Know?
Favorite Food: Fried Okra
Favorite Movie: Dirty Dancing
Favorite Musical Artist: Enrique Inglesias
Favorite Apparatus: Beam
Pet Peeves: People who confuse me with my sister Kara
In my spare time I like to: Shop, listen to music, watch movies
If I was on Fear Factor, these would be my biggest fears: Snakes and Roaches
The teammate or staff member I would use as a lifeline on “Millionaire”: Mo
If I could have dinner with three famous people, they would be: Javier Lopez, Chipper Jones, Ben Affleck
The one person in history I would most like to meet: Abraham Lincoln
My biggest role model is: My mom
If I was not competing in gymnastics, the other sport I would play: Track and Field (Pole Vault)
Not many people know this but: I was on the 1996 Olympic Exhibition team for gymnastics
Best present I ever received: Car
The thing I like most about gymnastics: The thrill of learning a new skill or achieving a goal.
The moment in my life when I was most proud: Listening to my sister’s speech at graduation
Why UK?: The Big Blue pride