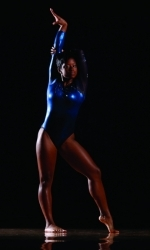 At Utah State: Tied for second at the NCAA North Central Regional after leading the competition for five rotations with a 9.9 … Minion earned the America First Credit Union Utah State Student-Athlete of the Week for her performance at regionals … Her score of 9.9 was not only a career best, but also the third-highest score in Utah State history and makes her one of eight different Aggie gymnasts to post the high score … Minion claiming four of the six high marks and holds three of the top-five school records on vault and the fourth-highest score on floor with a 9.9 … In March she was named to the second-team All-WAC honorees. She was also named WAC Gymnastics Specialist of the Week

Pre-College: Competed as a Level 10 gymnast at River City Gymnastics … Placed eighth in the all-around at the Eastern Regionals, with a first place finish on the floor exercise … Competed in the all-around at the 2006 Junior Olympic Nationals with an eighth place finish on vault and landed in the 26th spot all-around … Was state champion at Level 7-9 … Graduated from Bolton High School with a 3.1 grade point average.