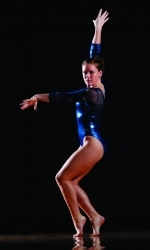 2009 (Junior): Entered the uneven bars line-up this season, competing in 11 meets … Her best performance came while in her home state of Iowa with a 9.850 on the uneven bars, earning her first career event title … Made two appearances into the floor line-up at Auburn and Iowa.

2008 (Sophomore): Notched a career high on vault of 9.775 at the NCAA Central Regional meet on April 12 … Started in the vaulting line-up in Kentucky’s last eight meets including upsets of Ohio State and Arizona.

Pre-College: Competed for coaches KJ Kindler and Lou Ball at Johnston High School … Won three straight all-around state championships as a sophomore, junior and senior … Was the Region IV floor champion as a senior in 2006 … Placed in the top 15 in the all-around at the Junior Olympic Nationals in back-to-back years from 2003-04.