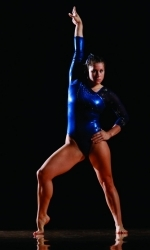 2009 (Junior): Took to the uneven bars seven times … Earned a season-best 9.750 while competing against Alaska-Anchorage in March.

2008 (Sophomore): Notched a career best score of 9.8 on the uneven bars at Centenary College … Competed on bars in seven meets for the Wildcats … Hit a 9.7 on bars at the SEC Championships … Earned a 9.65 at the NCAA Central Regional.

2007 (Freshman): Competed on the uneven bars for the Wildcats during her inaugural campaign … Recorded a season-best mark of 9.6 on bars at the SEC Championships on March 31 … Posted a score of 9.575 at the NCAA Central Regional … Participated in four meets … Named to the 2007 SEC Freshman Academic Honor Roll.

Pre-College: Competed for Tim Richards at Let It Shine Gymnastics … As a freshman in 2003, took eighth place on bars at nationals … Finished ninth in the all-around at Level 10 Regionals as a sophomore, including a third-place finish on bars.