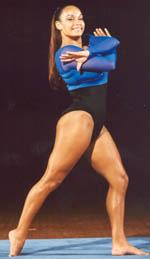 Pre-College: Was an AAU All-American for six consecutive years… Placed fourth in the all-around at the 1996 Junior Olympic Nationals… Graduated from McKinley Senior High School.

Did You Know?
Favorite Food: Chicken
Favorite Movie: The Best Man
Favorite Musical Artist: DMX
Favorite Apparatus: Floor
Started gymnastics at age: Four
In my spare time I like to: Sleep
If I was on Fear Factor, this would be my biggest fear: Eating anything raw or alive
If I could have dinner with three famous people, they would be: Jennifer Lopez, Ludacris, Morris Chestnut
The people in history I would most like to meet: Morris Chestnut and Shemar Moore
If I was not competing in gymnastics, the other sport I would play: Track
The thing I like most about gymnastics: The rush I get from competition
Why UK? The team and the coaches