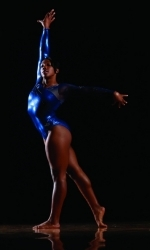 2010 (Junior): Competed in all events at all 13 meets during the season … Earned three medalist honors in the all-around competition against Texas Woman’s (38.800), Ohio State (39.125) and the Illinois State and George Washington tri-meet (38.925) … Set a career high in floor exercise (9.850) during the season … Received the Most Outstanding Performer award in the all-around at the end of year team banquet.

2009 (Sophomore): Competed in seven meets this season, primarily on the uneven bars and floor exercise … Had three all-around performances … Earned a career-high 9.800 on the floor twice, first against LSU and then again against Arkansas … Was forced to sit out the remainder of the season due to a back injury.

Pre-College: Competed for Premier Athletics under coaches Boo Dean and Sasha Ellis … Finished undefeated in her junior season of 2007 … Was the state and regional championship and finished third at nationals … Finished second in the state as a sophomore … Was fourth at regionals and seventh at nationals as a freshman in 2005.