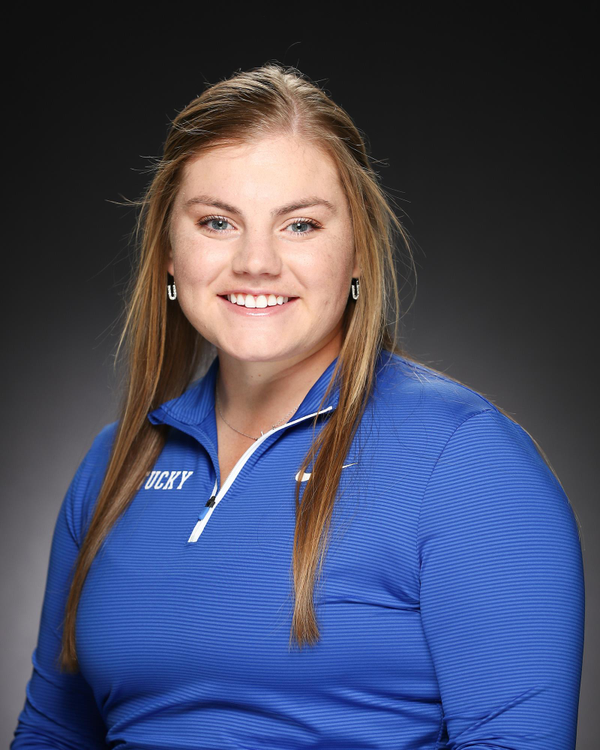 2021-22 (Fifth-Year Senior): Tied for 20th at the Lady Bulldog Individual Championship in Athens, Georgia, with a score of 11-over-par 155 … Lost to Louisville’s Gabbi Bentancourt 2 and 1 in the Battle of the Bluegrass at Club Pelican Bay in Naples, Florida … Playing in her first collegiate event since February 2020, contributed all three rounds to the team score at the Wolverine Invitational and fired a 15-over-par 228 to tie for 53rd at the University of Michigan Golf Course in Ann Arbor, Michigan … Dean’s List in fall 2021, spring 2022 … SEC Spring Academic Honor Roll member.

2020-21 (Senior): Did not compete in an event in 2020-21 … Served on the Student-Athlete Advisory Committee as historian … Dean’s List in fall 2020 … Inducted into the Frank G. Ham Society of Character, which honors Wildcats who have shown an extraordinary commitment to academic excellence, athletic participation, personal development, career preparation and serving as a role model … SEC Spring Academic Honor Roll member.

2020 Summer: Finished in third place at the Kentucky Women’s Individual Stroke Play Championship with a two-round score of 4-under par at Griffin Gate Golf Resort in Lexington … Also placed third at the 75th Marion Miley at the Lexington Country Club in Lexington.

2019-20 (Junior): Enjoyed a breakout season with career-best numbers in every major category in four appearances in the shortened season … Posted a career-best 75.3 stroke average with career 18-hole and 54-hole lows in 2019-20 … Matched career bests with one top-10 showing and two top-20 finishes … Playing as an individual, placed 83rd at the Moon Golf Invitational at the Duran Golf Club in Melbourne, Florida, with a score of 21-over par … Continued breakout junior season with a career-best weekend at the Cardinal Cup … Recorded both 18-hole (69) and 54-hole (221) career lows at the University of Louisville Golf Club in Simpsonville, Kentucky … Tied for 16th at the Cardinal Cup with a score of 5-over par (77-69-75) … Tied a then-54-hole career low at the Bettie Lou Evans Invitational at the University Club of Kentucky in Lexington … Tied for 41st at 11-over par playing as an individual at the Bettie Lou … Competing as an individual at the Minnesota Invitational, put together arguably the most complete performance of her collegiate career by tying for seventh in a talented field in Woodbury, Minnesota … Notched her second career-top 10 showing with a 1-under-par 143 … After a 73 in the opening round, recorded an 18-hole career low of 70 at the Prestwick Golf Club … SEC Spring Academic Honor Roll member … Dean’s List in fall 2019 … Member of UK’s Student-Athlete Advisory Committee.

2018-19 (Sophomore): Played in six events in her sophomore season and posted career lows in stroke average (77.4), 54-hole score (227) and 18-hole score (73) … Notched her first top-10 showing and top-20 finishes in 2018-19 … Recorded the second top-20 finish of her career by tying for 18th place at the Colonel Classic in Richmond, Kentucky … Fired a then-54-hole career-best score of 227 (75-73-79) at the University Club at Arlington, including a career-low-tying 73 in the second round … Competing for the team score for the first time this season and second time in her career, tied for 45th at the Clover Cup at Longbow Golf Club in Mesa, Arizona, with a score of 16-over par … Playing as an individual, tied for 80th with a score of 25-over par at the Reynolds Lake Oconee Collegiate Championship in Greensboro, Georgia … Dominated her individual match vs. Louisville’s Margo Bechadergue in the match-play Battle of the Bluegrass at Hoover Country Club in Birmingham, Alabama …  Averaged 76.8 strokes per round in two events in the fall … Placed 56th playing as an individual at UK’s Bettie Lou Evans Invitational at the University Club of Kentucky in Lexington with a score of 16-over par (232) … Debuted at the MSU Greenbrier Invitational at Greenbrier Country Club in Lexington with her first top-10 finish by tying for fifth with a 54-hole career-best score of 229 (13-over par) … Fired a career-low 73 in the final round … Dean’s List in spring 2019 … Member of UK’s Student-Athlete Advisory Committee.

Summer 2018: Tied for sixth with a score of 10-over par at the Marion Miley Invitational at Lexington Country Club in Lexington … Tied for 32nd overall and 24th among all amateurs (13-over par) at the Kentucky Women’s Open at the U of L Golf Club in Simpsonville, Kentucky.

2017-18 (Freshman): Appeared in four tournaments as a freshman with a 78.4 stroke average … Playing for the team score for the first time in her career, tied for 44th with a career-best 54-hole score of 230 (14-over par) at the Hurricane Invitational in Coral Gables, Florida … Tied for 47th (18-over par) at the Florida Challenge in Lecanto, Florida … Recorded a 78.3 stroke average in the fall … Tied for 42nd at the Cardinal Cup in Simpsonville, Kentucky, at 17-over par (233) … Fired a 74 in the final round of the Cardinal Cup, including going 1-under par over the last 14 holes … Made her collegiate debut with a 64th-place finish at UK’s Bettie Lou Evans Invitational, including a pair of 76s in the first and second rounds.

Before UK: Named to Kentucky’s All-State Team her sophomore, junior and senior seasons … Won the 2016 Kentucky High School Athletic Association Golf State Championship, climbing out of a three-shot deficit on the final day to shoot a 1-under-par 71 in the final round and become the first girl at Mason County High School to win the state title … Named the 2016 Golf House Kentucky Junior Girls Player of the Year … Also named the 2016 Kentucky Player of the Year … Tabbed to the All-Region Team in all four seasons in high school … First girl in Mason County High School history to win her regional tournament in back-to-back years … Owns a long list of high school and junior tournament championships, including back-to-back Mason Country Girls Invitational titles … Won the Kentucky Junior PGA Championship Qualifier in Bardstown, Kentucky, as well as the Kentucky Junior Masters in Lexington … Placed second in the 2016 Kentucky Junior Amateur when she lost in a playoff … Numerous other top-10 finishes in junior tournaments.

Personal: Born Aug. 29 … Daughter of Roscoe and Theresa Fite … Native of Maysville, Kentucky … Has a younger brother, Cray … Honor-roll student in high school who posted a 4.0 grade-point average … Nominated for the United States Golf Association-American Junior Golf Association President’s Leadership Award in high school … Also was nominated for the AJGA Scholastic Junior All-American Team in high school … Received the Robert E. Yancey Scholarship at the Natural Resource AJGA event in 2015 and 2016 … Member of the Mason County High School orchestra, choir and Future Christian Athletes … Major is kinesiology … Her most memorable moment of her golfing career was day two of the Kentucky state tournament when she won the title.

Why she chose UK: “I fell in love with the campus and practice facility. I really like the coaches and my teammates. They are great.”