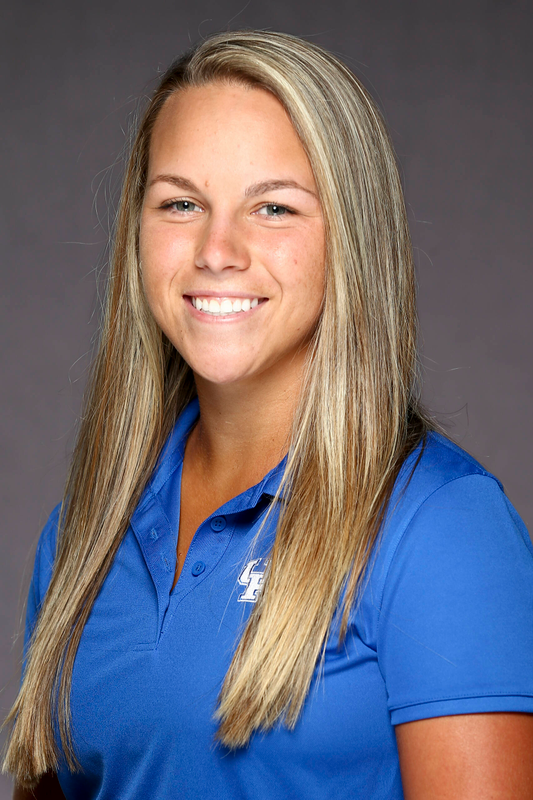 2021-22 (Junior): At the SEC Championship, she finished in 54th place, recording a 14-over-par 230 … Rallied a T38 finish at the Clemson Invitational on a 14-over-par 230 … Earned her third top-five finish of the season at the Clover Cup, putting together rounds of 70, 73 and 66 to turn in a 7-under-par 209 for fifth place … Finished T65 at the Darius Rucker Intercollegiate with a 15-over-par 228 … Placed second at the UCF Challenge, her highest-ever finish as a Wildcat, while breaking the 54-hole school record by four strokes with a score of 15-under-par 201 … Also matched her career-best 18-hole low of 66 twice in Orlando … Dominated in her first collegiate match-play event with a 7-and-6 rout of Louisville’s Agustina Gomez Cisterna in the Battle of the Bluegrass at Club Pelican Bay in Naples, Florida … Notched two top-20 finishes in the fall and led the team with a 71.75 stroke average, just fractions ahead of her 2019-20 single-season record pace … Tied for the team lead in the fall with six rounds of par or better … Tied for 27th at The Ally at Old Waverly Golf Club in West Point, Mississippi, with a score of 4-over-par 220, including a first-round 71 … Top Kentucky finisher at the Ruth’s Chris Tar Heel Invitational with a 13th-place showing … With two rounds of under-par golf, shot a 4-under-par 212 (73-69-70) at the UNC Finley Golf Course in Chapel Hill, North Carolina ... Enjoyed her best tournament as a Wildcat at the Mason Rudolph Championship with 18-hole (66 in the first round) and 54-hole (208) career lows to tie for third, tied for her best collegiate finish … Opened the Mason Rudolph Championship at Vanderbilt Legends Club in Franklin, Tennessee, with a 6-under-par 66, a career best, thanks to eight birdies … Followed the 66 with a 70 and a 72 to finish at 8-under par overall, beating her previous 54-hole collegiate low by six strokes … Opened the season at the Wolverine Invitational with an 8-over-par 221 to tie for 29th at the University of Michigan Golf Course in Ann Arbor, Michigan … Dean’s List spring 2022 … WGCA All-American Scholar Team member … SEC Spring Academic Honor Roll member.

2020 Summer: Played in the 120th U.S. Women’s Amateur Championship in August, arguably the top amateur tournament in the country … After trying for 36th in stroke play, advanced to the round of 32 in match play at Woodmont Country Club in Rockville, Maryland … Teamed up with Wake Forest’s Rachel Kuehn to win the 43rd Carolinas Women’s Four-Ball Championship at Catawba Country Club in Newton, North Carolina … The duo torched the 26-team field by six shots with a score of 16-under par, a 36-hole tournament record … Placed fourth at the Golfweek Myrtle Beach Collegiate with a score of 2-over par at the Dye Club at Barefoot Resort in Myrtle Beach, South Carolina.

2019-20 (Freshman): Sensational freshman year with one of the best single seasons in Kentucky women’s golf history … Set the school’s new single-season stroke average record with a 71.88 mark … Made the All-SEC First Team, UK’s first All-SEC First Team pick since Cindy Mueller in 1989, when there was just one All-SEC team … 11th all-time Wildcat to earn All-SEC selection (13 total honors) but the first to do so as a freshman … Also made the SEC All-Freshman Team, just the third in program history and the first since Haley Mills in 2014 … Appeared in a team-high-tying six events in the shortened season … Placed in the top 20 in five of six team events, the best mark on the team … Also added two top-10 showings … Eleven of 17 rounds were par or better, the best mark on the team and the third-best mark in single-season school history despite the shortened season … Team used her scored in 15 of 17 rounds, tied for a team best … Played a central role in UK’s two team championships … Was among the candidates for the Arnold Palmer Cup for most of the season … Finished the season ranked No. 53 nationally in Golfstat’s rankings … With a 72-74-70, shot even par at the Moon Golf Invitational and tied for 12th at the Duran Golf Club in Melbourne, Florida … Opened the Lady Puerto Rico Classic with a 71 and tied for 28th with a 6-over-par 222 at the Rio Mar Country Club in Rio Grande, Puerto Rico … Led the Wildcats to a second-place finish at the Cardinal Cup with a fifth-place individual showing … Carded a 1-under-par 215 (72-69-74) at the University of Louisville Golf Club in Simpsonville, Kentucky … Posted three straight rounds of par or better (70-72-72) at the Ruth’s Chris Tar Heel Invitational en route to a 2-under-par 214, which tied her for 13th in the competitive field at the UNC Finley Golf Course in Chapel Hill, North Carolina … Helped the Wildcats to their second straight championship with a win at UK’s home tournament, the Bettie Lou Evans Invitational at the University Club of Kentucky in Lexington … Carded a 54-hole total of 1-over par in the Bettie Lou to tie for 11th, including a round of 70 to close out the 15-shot team win … Played a critical role in Kentucky’s championship at the Minnesota Invitational in Woodbury, Minnesota … In her first collegiate tournament, fired back-to-back 69s for a 6-under-par 138 to tie for third at the Prestwick Golf Club … Sealed the championship for the Wildcats with four birdies over the final seven holes, including three straight late in the round … Led the field with 13 birdies … WGCA All-American Scholar Team member … Dean’s list spring 2020.

Summer 2019: Placed second at the Girls Junior PGA Championship in Hartford, Connecticut … In a 144-player field that featured some of the best golfers in the country, finished at 12-under par … Tied for 12th at the Rolex Girls Junior Championship … Member of the East squad that won the 2019 Wyndham Cup … Qualified for the U.S. Girls’ Junior.

Before UK: One of the top amateur golfers in the country during her high school years … Believed to be the highest-rated signee in Kentucky women’s golf history … Consistently ranked high on the American Junior Golf Association rankings, rising up to No. 9 overall by the end of her high school career and No. 4 in the class of 2019 … Checked in at No. 12 in the Golfweek rankings before arriving at UK … 2019 Rolex Junior All-America First Team honors by the AJGA … Two-time individual state champion, winning once at the 3A level and once at 5A … Dominated the South Carolina Class 3A state championship in 2018 … With a 137, Castle won by 10 shots and set the two-day state tournament record … Also won the 5A state title in 2016 at White Knoll High School, where she led the team to a state runner-up finish … Owns the nine- 18- and 36-hole school records at White Knoll … Five-time All-State selection, five-time All-Region pick (including one year on the boys’ team) and a three-time member of the Can-Am Junior Team … Placed second at the ANNIKA Invitational USA in January 2019 … Numerous top-10 AJGA finishes, including seventh at the 2018 AJGA Girls Championship.

Personal: Born Feb. 21 … Daughter of Elizabeth and Darin Castle … Has a younger sister, Jalen … Born and raised in West Columbia, South Carolina … Attended Gray Collegiate Academy for high school … Member of the National Honors Society in high school … Also volunteered with Pets Incorporated and worked junior golf clinics in high school … Chose UK over UNC Charlotte, South Florida, South Carolina and Indianapolis … She considers her most prized possession her golf clubs because of where they’ve taken her in life … She’s made a hole-in-one before and considers it her favorite golf memory … Major is marketing and management.

Why she chose UK: “From the moment I stepped on campus, UK felt like home and I felt welcomed by the team and the coaches.”