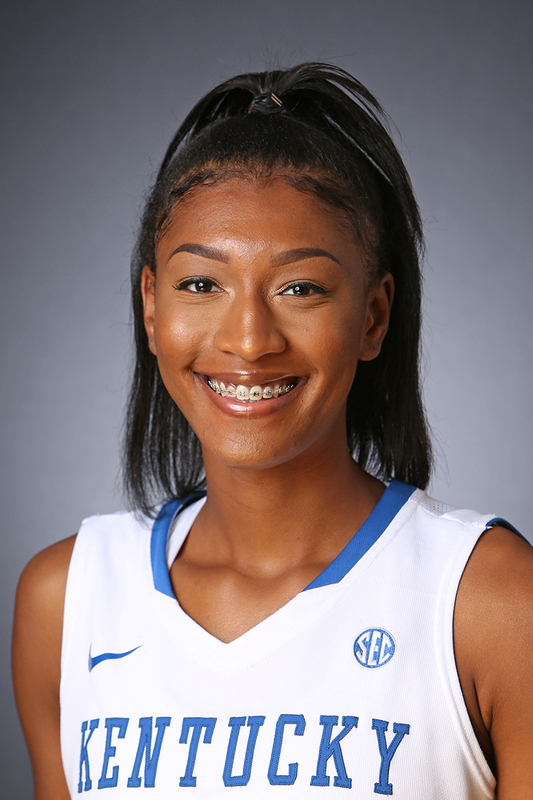 Explosive athlete that was a star volleyball player and won a volleyball and basketball state championship in high school … Very versatile player that can play outside the post and is very physical when she plays in the post … Won a state championship in basketball her senior year by hitting a 3 late in overtime coming out of the post position … Chose Kentucky over Georgetown, Vanderbilt and North Carolina.

2017-18 (Freshman)
Missed eight games due to injury during the season but played in 24 games with four starts throughout the season … Averaged 6.6 points and 3.5 rebounds per game … Shot 42.2 percent from the field and 32.6 percent from long range hitting 15 3-pointers … Scored 10 or more points seven times leading Kentucky in scoring once … Led UK in rebounding four times, in steals once and in blocks twice … Had five or more rebounds seven times …. Started the year with 13 points on 5-of-6 shooting against Sacrament State … Had 12 points against Tennessee Tech with three blocks and two assists … Recorded her first career double-double against Evansville with 20 points and 10 rebounds, which was the first 20-10 game of the year for UK … Had 11 points in her first career start at FGCU …  Made her third career start at Florida, adding six points and a career-high six defensive rebounds … Came off the bench to score 11 points and hit a season-best three 3s against Arkansas with all three 3s coming in the second half after the Razorbacks had tied the game … Hit a 3 in 11 games and scored at least one point in every game she played but one.

High School
A four-year starter for the Columbus High School, leading the Blue Devils to four straight 20-win seasons … Scored 27 points and hit a buzzer-beating 3 to lift Columbus to the Class AAAA State Championship as a senior … Averaged 22.2 points per game, 6.7 rebounds per game, 1.0 assists per game, 2.0 steals per game and  1.6 blocks per game as a senior to earn Region 1-4A Player of the Year and all-state by the Atlanta Journal-Constitution … Earned the Sue Walton Outstanding Athlete of the Year Award at the 2017 Sportsvisions Female Athletes of the Year banquet … Helped Columbus High School make the state quarterfinals last season, averaging over 20 points per game with 8.9 rebounds, 1.7 steals and 1.3 blocks per game, hitting an impressive 49% from the field … Hit 48% from the field as a sophomore, averaging 18.8 points, 6.3 rebounds, 1.8 steals and 2.3 blocks … Was a key player on Columbus High School’s state runner-up team as a freshman, averaging 11.2 points, 4.5 rebounds and 1.0 blocks per game … Was named Georgia Sportswriters Association Class AAAA Second-Team All-State as a junior … All-around athlete that was a star volleyball player at Columbus High School, where she had over 1,000 career kills leading the team to a state championship title her junior year, state runner-up title her sophomore season and a state semifinal appearance her senior season  … Named a 2017 McDonald’s All-America nominee … A skilled post player that is ranked as the 63rd overall player in this class and 12th best forward by ProspectsNation.com … A three-star prospect by ESPN.com … Played AAU for FBC under head coach Alfred Motton … Stellar volleyball career letting all four years as an outside hitter helping her team win multiple state championships … Was a member of the National Honor Society and Spanish Honor Society … Was named to her high school’s honor roll.