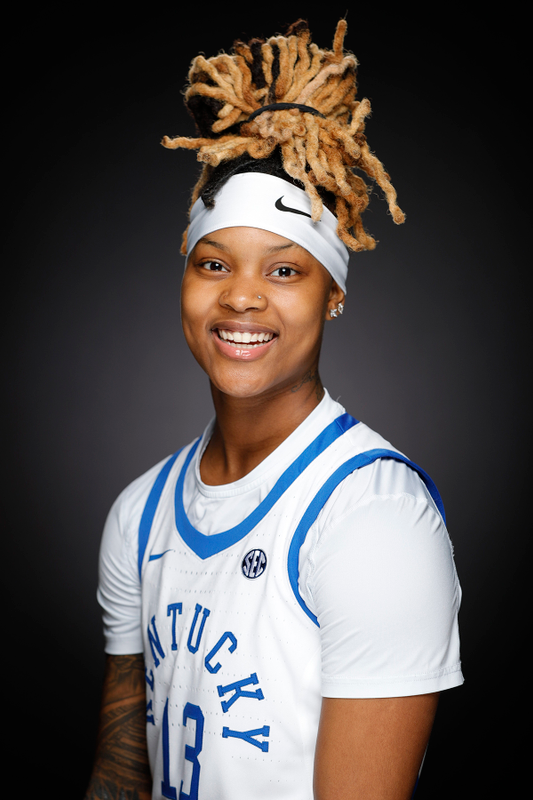 Brought a wealth of Southeastern Conference experience to Lexington after spending her first two collegiate seasons at Tennessee, where she was a key reserve her freshman season and a starter her sophomore season … Athletic guard that has great size and floor vision … One of three UK players from the Chattanooga area, playing high school basketball with Treasure Hunt while she played AAU with Rhyne Howard

2020-21 (Junior)
Played in 19 games with eight starts, averaging 5.1 points per game and 3.3 assists per game … Had three or more assists nine times during the season and led UK in assists six times … Also led UK in blocks three times … Made her Kentucky debut against Wofford on December 19, 2020, playing for more than 18 minutes, hitting a 3-pointer on 1-of-4 shooting, adding two rebounds, two assists and a steal … Played for more than 20 minutes against then-No. 10 Arkansas, scoring five points, grabbing two boards, dishing out three assists and blocking three shots … Played a crucial 26 minutes at then-No. 12 Mississippi State, scoring six points, including a key 3-pointer at the end of regulation to tie the game, and added three rebounds, two assists and a steal … Dished out seven assists at Auburn, the first Kentucky player to come off the bench and have at least seven assists in an SEC game since Crystal Riley vs. Florida on Feb. 18, 2010 (eight assists) … Played 25 minutes against Alabama at Rupp Arena, scoring nine points, dishing out seven assists, grabbing six defensive rebounds and blocking one shot … Earned her first start for Kentucky against Tennessee at Rupp Arena, scoring 11 points on 4-of-7 shooting and an impressive 3-of-5 from long range, and added three assists, while all of her points and assists came in the second half … Recorded a season-high 10 assists and seven rebounds at Florida, adding nine points, two blocks and a steal … Combined for five assists, three points and a steal at Georgia … Against Florida in the second round of the SEC Tournament, she rallied nine points on 3-of-5 shooting and 2-of-3 from the arc, recording three rebounds and two assists … Against Georgia in the quarterfinals, she earned six points, four rebounds and four assists … Played for 30 minutes in Kentucky’s NCAA Tournament First Round win against Idaho State, scoring four points, grabbing six boards, dishing out five assists, forcing one steal and adding one block … Had 10 points against Iowa with four rebounds, two assists and two steals.

at Tennessee
Averaged 6.5 points per game, 4.7 rebounds per game and 4.1 assists per game as a sophomore, hitting 40 percent from the field and tripled her output from long range after hitting only a handful of 3s as a freshman … Finished second on the team with 128 assists while adding 23 blocks and 27 steals … Can share the ball with the best in the nation, notching an assist in every game but one in 2019-20, including four or more assists in 14 games … Dished out 10 or more assists twice as a sophomore, including a career-best 12 against Missouri … All-around ability showed triple- or quadruple-double potential in 19-20 as she performed well against some of the best competition … Against UCONN, she earned 11 points and led the Lady Vols with five assists and three steals, while she had nine points, six assists, four rebounds and two steals against Texas A&M … Recorded a career-high 13 rebounds against Notre Dame adding nine assists, five points and four blocks in 19-20 … As a freshman, she played 32 games and averaged 3.4 points, 3.4 rebounds and 1.3 assists per game … Huge off the bench as a rookie, leading all reserves with 42 assists while she tied for the fewest turnovers on the team with just 30 … Best game as a freshman was at LSU, scoring 12 points and going 6-of-6 from the free-throw line in the final two minutes of the game to seal the win … Scored 10 points and earned eight assists against Murray State while she led the team in rebounding, blocks and steals at East Tennessee State.

High School
Entered college as the No. 11 overall player in the 2018 class according to Prospectsnation.com while she was the No. 25 overall player by ESPN.com … The 2018 McDonald’s All-American and Jordan Brand Classic participant also was tabbed NACA Sports First-Team All-America as a senior and was Naismith All-America Honorable Mention as a junior … Showed her ability to take over games in the prestigious Jordan Brand Classic scoring the last four points, including the game-winning put-back with less than a second remaining for the Away Team … A star high school player at Hamilton Heights Christian Academy in Chattanooga, Tennessee, where she played for Keisha Hunt, who is the mother of UK freshman Treasure Hunt, who also played at Hamilton Heights … Averaged 11.9 points, 6.7 assists, 5.4 rebounds and 2.4 steals per game as a senior while she earned 10 points, 7.1 assists, 6.1 rebounds and 2.5 steals per game as a junior … Both years, she helped HHCA to the NACA Division I Championship.