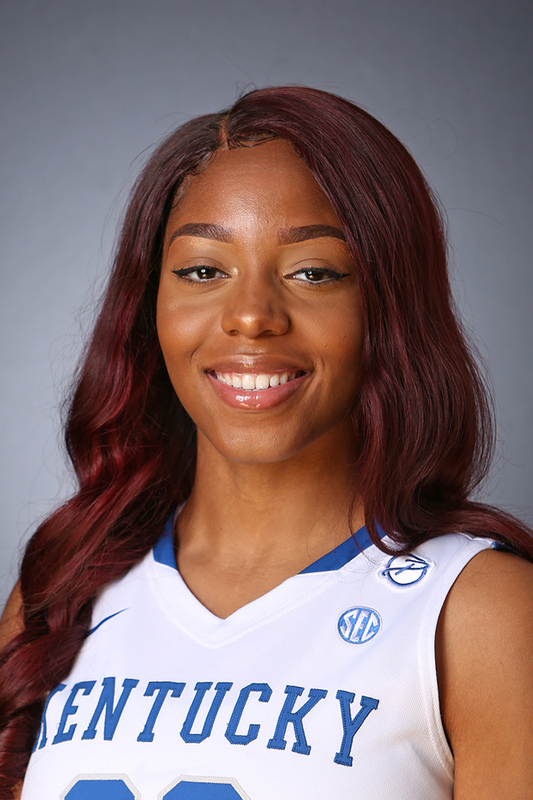 Athletic player that has limitless potential coming from a very athletic family … Agile in the post bringing a physical post presence to the team … Gifted rebounder and shows great focus and intensity on the defensive end … Continued to improve every time she stepped on the floor her rookie season … Chose Kentucky over Vanderbilt, Ole Miss, Virginia Tech and Tennessee.

2017-18 (Freshman)
Played in all 32 games during the season averaging 16.9 minutes per game … Started eight games, including the first six games of the year … Averaged 6.7 points per game and 3.8 rebounds per game … Recorded 10 or more points eight times, including 10 points and nine rebounds in the season lidlifter against Sacramento State … Led Kentucky in scoring once with 16 points against Arkansas adding four rebounds and a block … Led the Wildcats in rebounds seven times and in blocks 10 times … Really started to play well during conference play with 11 points and seven rebounds vs. South Carolina followed by 15 points and five rebounds against Alabama and 16 points and four rebounds against Arkansas … Her strong performances in the Alabama and Arkansas games led her to be named SEC Freshman of the Week by the league office … Had back-to-back 13-point performances against Ole Miss and Mississippi State with four rebounds vs. Ole Miss and two blocks vs. MSU … Had 12 points going 6-of-7 from the field against Missouri … In two regular season games vs. Mississippi State she had 21 points, 10 rebounds and four blocks … After starting the season 18-for-37 from the free-throw line, she ended the season hitting 31 of her last 37 attempts from the charity stripe … Her 25 blocks tied Victoria Dunlap for the seventh most by a freshman in program history.

High School
A four-year starter at Hillsboro High School, leading her team to a district championship her senior year under head coach Cherish Stringfield … After missing her junior year with an injury, had a stellar senior season for the Burros averaging 14.0 points per game, 9.3 rebounds per game, 1.5 blocks per game and 1.0 steals per game … Averaged 15 points, 11 rebounds, two blocks and one steal per game her sophomore season … Named to the Metro Nashville Basketball Coaches Association Class AAA All-Metro Team and Class AAA All-District Team her sophomore season … Named a 2017 McDonald’s All-America nominee … Won the 2017 Nashville City Civitan Club Moss-Oliver Award, which annually is given to one female high school basketball player in Davidson County who represents the best in athletic ability, academic achievement, leadership skills and community service … Played with the Tennessee Fight under coach Tom Insell … A four-star post player by ProspectsNation.com, who ranked her the 13th best post player and 78th best overall player in the class … A three-star post by ESPN.com, which ranked her as the 14th best post in the class … Played volleyball all four years at Hillsboro as a middle blocker and was tabbed all-district two years and all-metro three years … Was named a Saint Thomas Scholar, on the school’s principal’s list and received a certificate of excellence for outstanding achievement … Was secretary of the student council and active in community service picking up trash as part of CleanUpNashville and volunteered at a nursery … Enjoys playing the saxophone.