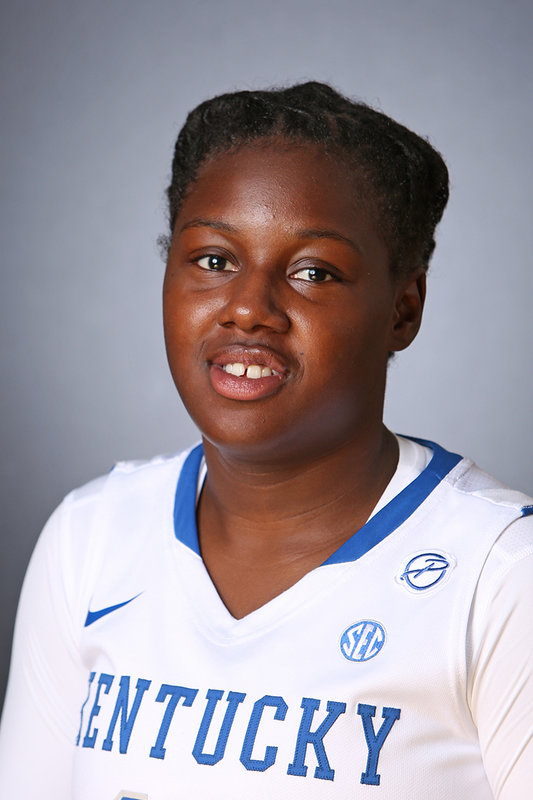 Experienced player that won a junior college national championship … Missed her second year of junior college with an injury, but showed no lingering effects last season … Athletic guard that can create for herself and her teammates … Strong finsher in traffic around the rim … Hardnosed, tough guard that is strong on both ends of the court … Choose Kentucky over Wichita State … Is a senior academically but has two years of athletic eligibility remaining.

2017-18 (Redshirt Sophomore)
Played in 30 of the team’s 32 games with two starts … Averaged 4.7 points per game, 2.1 rebounds per game and had 40 assists during the season … Shot 44.5 percent from the field and 30.4 percent from long range during the year … Score in double figures five times during the season … Had three or more assists in four games and two or more steals in three games while leading UK in steals twice … Made her first career start in the opening game of the SEC Tournament vs. Alabama with six points, three rebounds and two assists … Provided important minutes on both ends of the court against Washington State, posting eight points with three assists and three rebounds … Came in clutch off the bench in the win over Florida, adding 12 points, 10 of which were in the second half … First player off the bench for the Wildcats vs. Ole Miss, adding six points, four assists … Scored 11 points vs. Mississippi State in the quarterfinals of the SEC Tournament with two assists …  Really started to play good ball the last few weeks of the season with two or more assists in each of her last four games … Also went 11-of-20 from the field during that stretch, including 3-of-4 from long range with 15 rebounds.

Junior College
Shined at Gulf Coast State College, where she helped the Commodores to the 2016 National Junior College Athletic Association National Championship, 2016 Panhandle Conference Championship and 2016 Florida College System Activities Association/NJCAA State Championship … Started all 33 games her first season at GCSC, which went 32-1 overall to achieve one of the best winning percentages in school history … Averaged 11.2 points per game as a freshman, hitting at a .469 clip from the field and .267 clip from beyond the arc … Also averaged 3.9 rebounds per game and 2.5 assists per game … Scored in double-digits 20 times during the season, including a season-best 19 points in three games … Shined down the stretch for GCSC, scoring in double-digits in five of the team’s seven postseason games, adding six or more assists in two games … Season best in assists came against Pensacola State with seven, while she had a season-best 10 rebounds against Tallahassee … Injured her knee and missed her sophomore season at GCSC, which also won the 2017 NJCAA National Championship.

High School
Strong high school career at Chipley High School in Florida where she was a five-year starter, leading the Tigers to 20 or more wins every season … Averaged 22.6 points, 8.7 rebounds, 5.2 assists and 4.5 steals per game as a senior … Also averaged over 20 points per game, seven rebounds per game and five assists per game as a junior … Helped Chipley advance to two class A state championship games … Was named Class A All-State First Team her senior year by the Florida Association of High School Coaches … Was named to her high school honor roll and was very active in community service.