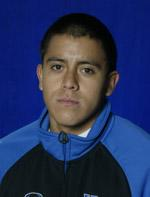 Coach Collins on Nikolas – “Nikolas really developed very well in the spring. He has great pace, a good nose for the goal and I expect him to be a player for us this season.”

Personal – Born June 8, 1983… Parents are Margoth and Pedro Moreno… Enjoys motorcycling in his spare time… Undecided on a major.