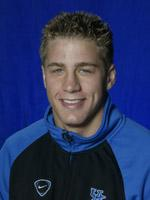 Coach Collins on Austin – “Chris has really progressed well since he came to UK. He should be one of the leaders this year. I think he will solidify the right back position as his own and I expect him to do well.”

2001 – Started 12 of the 18 games in which he has played, including the last nine… Integral part of UK’s strong defensive unit that has allowed just 15 goals on the year… Tallied an assist against Georgetown (Ky.) College.

2000 – Started 12 of the 17 games in which he appeared… Made an immediate impact in strong defensive unit that surrendered only 26 goals on the season… Hit one of the Cats’ four penalty kicks in shootout with No. 9 Saint Louis to help UK advance to second round of the NCAA Tournament for the first time in school history… Assisted on game-winning goals in both games against MAC-rival Bowling Green: first came in overtime to give the Cats a 2-1 win for a share of the MAC regular-season title; the second came in a 1-0 victory in the MAC Tournament Championship.