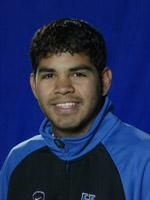 Coach Collins on Brook – “Brook is ready for his best season here at UK. He has gotten better every year since being here and that is due to the fact that his work rate is second-to-none. Brook has a real impact on the field.”

2002 – Provided a spark in the attack as one of only four Wildcats to appear in all 19 games… Made 11 starts on the season… Took eight shots, scoring UK’s only goal during an overtime loss to Coastal Carolina in the finals of the UK Invitational Tournament.

2000 – Saw action in 20 games, starting two… Scored two goals on the season, and both were crucial: the first was the game-tying goal against Louisville which put the Cats in position to win the program’s 100th game, while the second was the gamewinner against Bowling Green in the MAC Tournament championship game… Assisted on the game-winning goal against UNC Asheville… Took 15 shots on the season.

Pre-College – Attended the prestigious adidas Soccer Academy… Was selected the USISL Player of the Week in May 1999… Awarded the Florida Merit Award for academic achievement.Personal – Born April 14, 1981 in Fortaleza, Brazil… Son of Diane and Barry Pearse… Chose UK over Akron because UK “has a great campus and the soccer is great.”