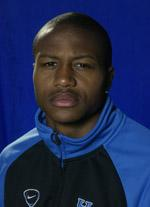 General – Ineligible for the 2003 season.

2002 – Appeared in all but one match for the Wildcats, making four starts… Tallied the first assist of his collegiate career on the second goal of UK’s 4-0 shutout against IUPUI… Scored game-winning header against MAC-rival Northern Illinois… Led the team in scoring during the MAC Tournament, with goals against Buffalo and Bowling Green.