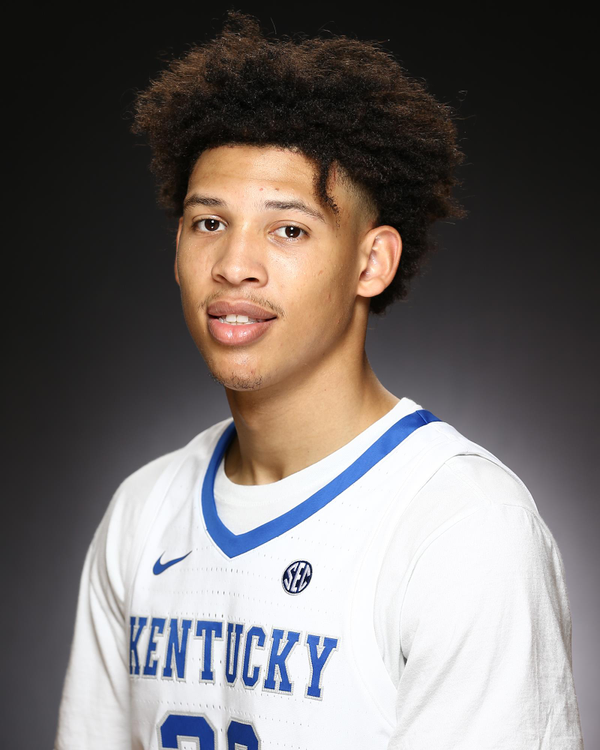 Redshirt Junior: Saw action in nine games in 2021-22 … Scored eight points, had two rebounds and a steal … Was a perfect 4 for 4 from the free-throw line … Had two points in the home win over Tennessee … Registered two points and a pair of rebounds in the win over Western Kentucky … Logged a career-high-tying four points and added a steal against Mount St. Mary’s.

Redshirt Sophomore: Southeastern Conference Winter Academic Honor Roll member … Graduated in August with a degree in communication … Appeared in two games in 2020-21 after missing the first two seasons at UK rehabilitating from a knee injury suffered in high school …. Got onto the stats sheet with his first career points and two rebounds in three minutes of action in the regular-season finale vs. South Carolina … Played in his first basketball game and made his UK debut vs. Morehead State in the season opener.

Redshirt Freshman: SEC Winter Academic Honor Roll member … Dean’s List fall 2019, spring 2020 … Did not play as he continued to rehab from a knee injury he suffered at the end of his high school career … Began practicing with the team in January.

Freshman: SEC First-Year Academic Honor Roll member … Dean’s List spring 2019 … Used his first season as a redshirt year to recover from a knee injury he suffered at the end of his high school career.

A highly-productive player out of Lexington Catholic High School … 1,000-point scorer for the Knights … Averaged 19.3 points and 8.7 rebounds per game as a senior … Three-year starter and scored 1,282 career points, which ranks 14th all-time in program history … Also collected 934 career rebounds and finished his career as the school’s fourth all-time career leader in rebounds … A knee injury in February of his senior season prematurely ended his career.

Born March 23 in Cherry Hill, New Jersey … First name is Alexander but goes by Zan … Parents are Kenny and Michelle Payne … Father, Kenny, was a former UK assistant from 2011-20 and current head coach of the Louisville men’s basketball program … Has a sister, Alexis …  Graduated with an undergraduate degree in communication in August of 2021 … Is now pursuing an undergraduate certificate in business and economics … Father played basketball at Louisville … Enjoys playing Fortnite when he’s not on the court … Lists a definition of a true hero as someone who always does the right thing … His dad has had the greatest influence on his life.