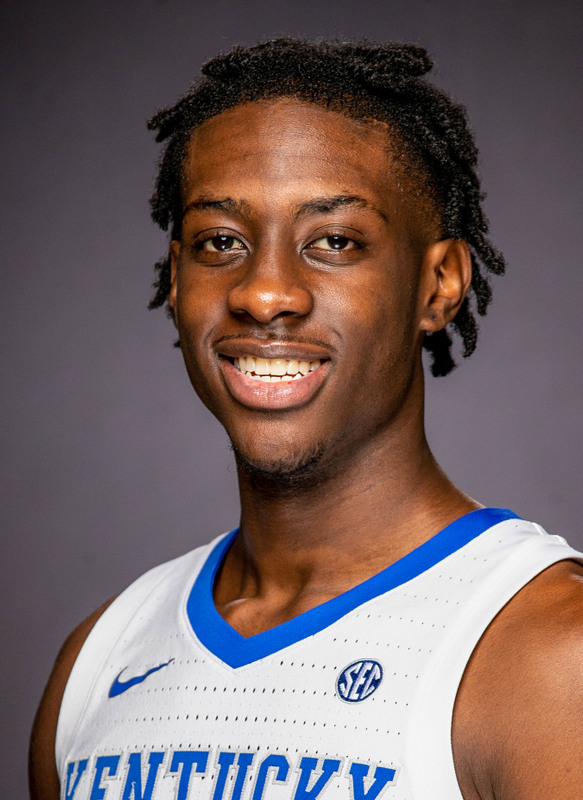 Freshman: Declared for the 2021 NBA Draft following the season and will forgo his remaining collegiate eligibility … Freshman season was plagued by a right leg injury that kept him out of the entire Southeastern Conference schedule … Returned to make an appearance in the SEC Tournament … Prior to the injury, was one of UK’s most explosive players and leading scorers … Played in eight games with six starts … Scored 77 points, hauled in 21 rebounds, dished out 16 assists and logged five steals … Averaged 9.6 points, 2.6 rebounds and 2.0 steals per game … Had four games with three or more assists … Totaled four double-figure scoring efforts … Led the team in assists twice and in steals in two games … Shared some duties at point guard prior to his injury … Played nine minutes, scoring two points and dishing out three assists against Mississippi State in the SEC Tournament … Had six points and three rebounds against No. 22/21 North Carolina … Logged 14 points, three assists, two rebounds and a steal vs. Notre Dame … Poured in a career-high 22 points with a trio of 3-pointers and added three assists against Georgia Tech … Posted 15 points and a career-best six rebounds vs. Richmond … Totaled 14 points, four assists, four boards and three steals in his collegiate debut vs. Morehead State.

A consensus five-star prospect … Ranked as high as No. 8 in the final Rivals rankings and one of the top shooting guards in the country … Tabbed to the Sports Illustrated All-American Third Team … Naismith All-American Honorable Mention … New England Preparatory School Athletic Council AAA Player of the Year … NEPSAC AAA First Team selection … Chosen for the McDonald’s All American Game, the Allen Iverson Roundball Classic and the Jordan Brand Classic … Member of the Brewster Academy team that won the 2019 National Prep Championships and led his team back to the 2020 finals with a 34-3 record before the COVID-19 pandemic canceled the rest of the event  … Averaged 16.2 points per game to go along with 5.1 rebounds and 3.7 assists per game in the 2019 Nike Elite Youth Basketball League.

Born Sept. 6 in Boston … Parents are Osmine Clarke and Adrian Briggs … Has three siblings, Tatyana, Gavin and Madison … Pursuing a degree in communication … His most memorable moment as a basketball player is winning his first national championship … His favorite movies are the Fast and Furious series … Lists macaroni and cheese as his favorite food … Chose No. 5 because he once forgot his No. 6 jersey before a game and had to wear No. 5; after he played well in No. 5 he’s worn that number ever since … His mother has influenced him the most in his life … Played Caribbean pan as a kid … Likes to down sour gummy worms and apple juice before games … Lists Tyler Herro, Shai Gilgeous-Alexander and Hamidou Diallo as some of his favorite former UK players … Chose Kentucky over Texas Tech, UCLA, Duke, Memphis and Boston College.