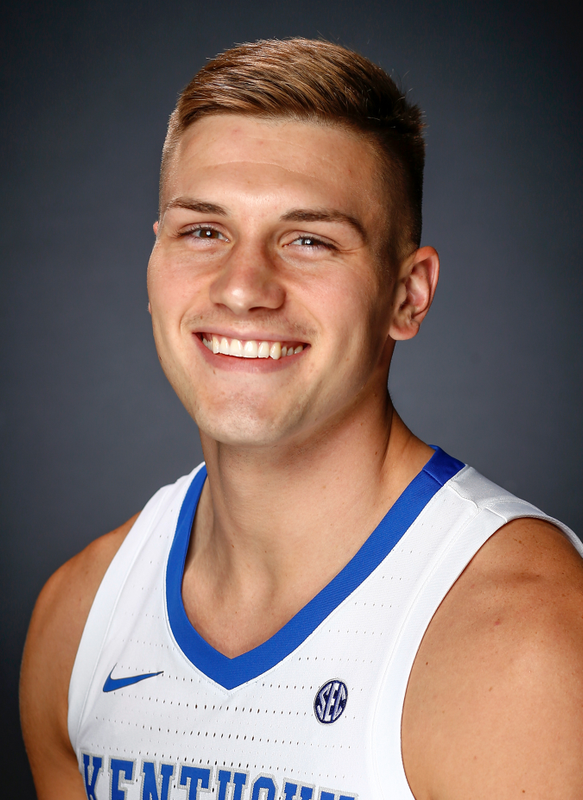 Graduate: 2019-20 Southeastern Conference First-Year Academic Honor Roll member … Member of UK’s Student-Athlete Advisory Committee … Played an important leadership role on a young team and provided key minutes off the bench … Started seven of 28 games played … Surpassed 1,000 career points late in the season at LSU … Finished his college career with 1,037 points, 621 rebounds and 86 blocks … Averaged 5.8 points and 3.8 rebounds in his lone season at UK with four double-figure scoring games … Made 40.7% from 3-point range, the second-best mark on the team … Played a vital role in the 18-point comeback season finale victory at Florida with nine points and six rebounds … Helped the Wildcats clinch the Southeastern Conference regular-season championship with 11 points on 4-of-6 shooting in the home victory vs. No. 15/15 Auburn …. Flirted with a double-double with 11 points and eight rebounds in the win at LSU … Blocked a season-high three shots in the come-from-behind victory at Vanderbilt … Hit three 3-pointers at LSU, including two in the second half that helped the Wildcats build a lead that would clinch the win … Scored eight points with two 3-pointers in the win at No. 18/18 Texas Tech … Scored a season-high 17 points with a season-best five 3-pointers in the game vs. Ohio State in Las Vegas … Missed three games in late November and early December with a fractured left wrist … Dished out a season-high four assists vs. Mount St. Mary’s … Flirted with a double-double with eight points and a season-high 12 rebounds in a season-high 34 minutes in the victory over Utah Valley … Recorded a double-double in the rout of Eastern Kentucky with 12 points and 11 rebounds … Also added two steals and two blocks … Seven points and six rebounds in his UK debut in the win over No. 1/1 Michigan State, including a momentum-changing 3-pointer late in the game.

Senior (Bucknell): Tabbed Second Team All-Patriot League and was tabbed to the Patriot League All-Tournament Team … National Association of Basketball Coaches All-District selection … Ranked second on the squad and sixth in the league in points per game (15.8) and led the team and league in rebounds per game (8.5) … Shot 53.6 percent from the field, 38.0 percent from 3-point range and 80.8 percent from the charity stripe … Played in 31 games … Scored in double figures in 27 contests … Posted a career-high 32 points and broke the school record for most field goals without a miss (11 of 11) against Holy Cross … Had 15 points and 16 boards at St. Bonaventure for his first double-double of the season … Scored 20 points and logged 10 rebounds at Vermont … Logged 24 points at La Salle … Scored 10 points at Ohio State … Named to the Diamond Head Classic All-Tournament Team after averaging 15.0 points and 9.0 rebounds per game … Named Patriot League Player of the Week after averaging 24.5 points and 10.5 rebounds against Army and Boston … In three Patriot League Tournament games, averaged 19.3 points and 9.3 rebounds per game.

Sophomore (Bucknell): Played in 31 games off the bench, averaging 4.8 points and 3.7 rebounds per game … Shot 50.8 percent from the field and 69.6 percent from the free-throw line … Poured in 12 points in just 12 minutes against Wake Forest.

Freshman (Bucknell): Freshman season ended prematurely due to a shoulder injury … Played in four games and saw 32 minutes of action … Had 10 points in 16 minutes against Fairfield.

First Division I player from Cameron County since the 1970s … Averaged 22 points and 14 rebounds and had 26 double-doubles in 28 games as a senior … Earned First Team All-State, All-District and All-League honors … Big 30 and North Tier Player of the Year … Helped team to win two straight league titles … Finished with 1,703 career points and 955 rebounds.

Born May 12 … Parents are Donald and Rachelle Sestina … Pursuing a graduate degree in kinesiology and health promotion … Youngest of five siblings … Brother, Andrew, played basketball at Allegheny College … Mother was a swimmer at IUP … Grandfather, Richard Gaydos, played football at Carnegie Tech … Graduated from Bucknell with a degree in geography.