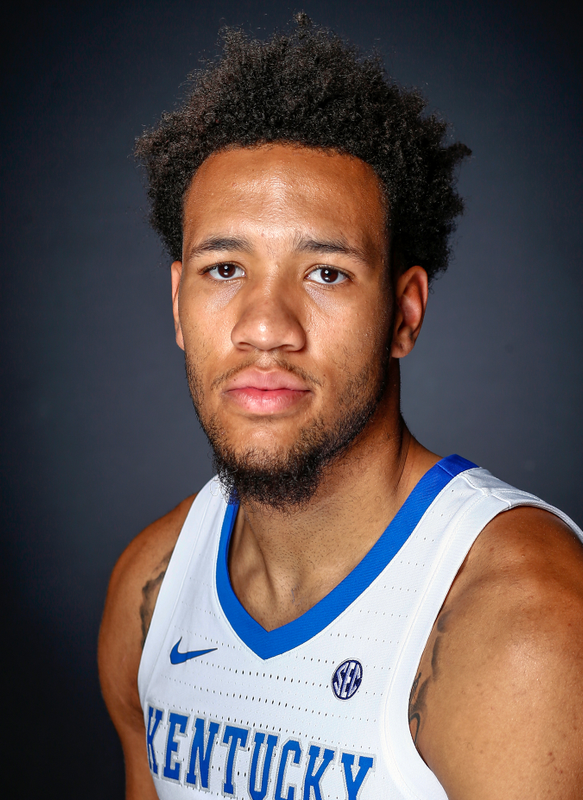 Sophomore: Declared for 2020 NBA Draft following the season … Major improvements in his sophomore season and evolved into a full-time starter … Posted career highs in points (6.1 per game), rebounding (5.4 per game), blocks (1.1 per game), field-goal percentage (51.8%) and free-throw percentage (66.7%) … Carved a role late in the season with key hustle plays, coming up with important rebounds and 50-50 balls as UK won 17 of 20 down the stretch … Had the game-winning tip-in with 11 seconds to play to help UK overcome an 18-point deficit at Florida … Played one of his best all-around games of the season with eight points, a season-high-tying 10 rebounds, a career-high three assists and two steals at Texas A&M … Grabbed eight rebounds in the win vs. Ole Miss … Recorded six points, nine rebounds and a season-high-tying three blocks in the comeback victory at Vanderbilt … Flirted with a double-double with 12 points and eight rebounds to go along with three blocks while playing superb defense vs. Southeastern Conference Player of the Year candidate Reggie Perry vs. Mississippi State … Nine points in the home win vs. Vanderbilt … Posted 10 points and six rebounds at home in the triumph against Georgia at home … Recorded eight points on 4-of-6 shooting in addition to six boards vs. Alabama … Nearly posted a double-double with eight points and a season-high-tying 10 rebounds vs. Utah … Career performance vs. Fairleigh Dickinson with 25 points and nine rebounds … Made 12 of 16 shots in the win over FDU … Went for 16 points and nine rebounds in the rout of UAB … Missed three games in the middle of November with a right ankle sprain.

Freshman: Declared for the NBA Draft but elected to return to school for his sophomore season … Appeared in all 37 games for the Wildcats during his freshman campaign, including making 10 starts … Started in nine of UK’s final 11 games … UK was 9-1 overall when he started … Scored 139 points, had 150 rebounds, totaled 38 blocks, posted 16 steals and had 15 assists … Ranked third on the team with the 38 rejections and led the team in the category in 14 games … Logged three games with three or more swats … Had two games with double-figure scoring and two with double-digit rebounds … Led the team in steals in six games … Grabbed 11 rebounds in his NCAA Tournament debut against Abilene Christian … Scored eight points against Tennessee in the Southeastern Conference Tournament semifinals … Posted a career-high four blocks, six rebounds and two points at Ole Miss … In the first game without Reid Travis (sprained right knee), started and played 23 minutes against Auburn … Finished with six points, seven rebounds, three blocks and a pair of steals in that win …  Scored six points and had four rebounds in nine minutes of the win over No. 1/1 Tennessee … Earned his first career double-double with career highs in points (11) and rebounds (13) in a win over South Carolina … Also drained a 3-pointer against the Gamecocks … Had two momentum-changing offensive rebounds in a come-from-behind win at Florida … Posted six points and six rebounds at Georgia … Had five or more points in seven of his first eight career games … Totaled eight points and five rebounds against UNC Greensboro … Registered seven points, four boards and a pair of steals against Monmouth … Logged eight points, seven rebounds and a pair of blocks against North Dakota … Scored 10 points and had seven rebounds in a win over Southern Illinois … Had eight points and six rebounds in his collegiate debut against No. 4/3 Duke.

Bahamas: Scored eight points and had six rebounds in 19 minutes against the Bahamas National Team … Did not play in the final three games with back spasms.

Averaged 25.6 points, 13.6 rebounds and 4.3 assists per game at Wheeler … During his career he captured MVP honors, First Team All-State accolades and was named Florida’s player of the year … Scored 12 points and had five rebounds at the McDonald’s All American Game … 2017-18 Marietta Daily Journal/Cobb County Boys Basketball Player of the Year … Began his high school career at Montverde Academy and played with future NBA No. 1 overall draft pick Ben Simmons … Considered a five-star recruit and was ranked as high as No. 6 overall by 247 Sports … The service also listed him as the No. 1 power forward … Rivals ranked him No. 11 overall, while ESPN listed him at No. 14 … Also participated in multiple junior national team mini-camps with USA Basketball.

Born Sept. 12 in Fort Pierce, Florida … Major is community and leadership development … Parents are Efrem and Glenda Montgomery … Has two sisters, Brittni and Brandy … Both of his parents and his two sisters played basketball in college … Lists some of his favorite movies as Love and Basketball, Friday and The Purge … Also played football … A hobby outside of basketball is playing video games, particularly NBA2K and Fortnite … Greatest fear is not fulfilling his dreams … Parents are his biggest influence … Chose Kentucky because of its great coaches and the opportunity to continue to improve his game.