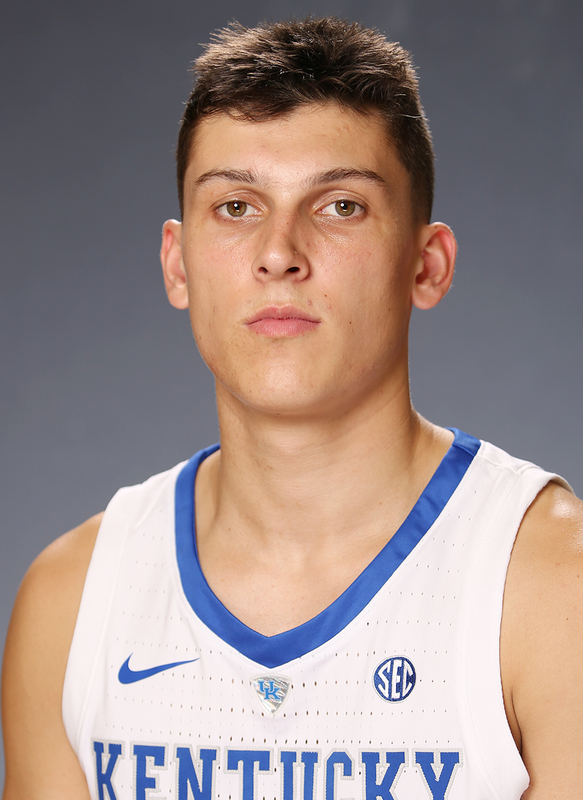 Freshman: Selected 13th overall by the Miami Heat in the 2019 NBA Draft … 2018-19 SEC Academic Honor Roll member … Enjoyed a prolific freshman campaign that included a number of awards … Tabbed to the NCAA Tournament All-Midwest Region Team … Voted the Southeastern Conference Newcomer of the Year by the Associated Press … An All-SEC Second Team and All-Freshman Team pick by the league’s coaches … Basketball Times All-Freshman First Team and CollegeInsider.com Kyle Macy Freshman All-America Team member … U.S. Basketball Writers Association All-District IV Team … Three-time SEC Freshman of the Week selection … Only play to start al all 37 games for the Wildcats … Averaged 14.0 points, 4.5 rebounds and 2.5 assists per game … Was first on the team with 60 3-pointers, second on the team in scoring (519 points), second in assists (91), second in steals (40) and fourth in rebounds (166) … Had a team-high 29 double-figure scoring efforts and led the team in scoring in 10 games … Had six 20-point efforts … Kentucky was 19-0 when he scored 15 or more points and 9-0 when he drained at least three 3-pointers … Charted 12 games where he led the team in steals and had four games with three or more swipes … Totaled seven games where he led the team in assists and had 15 games with three or more dimes … Became the 14th freshman in program history to score 500 or more points and the eighth to hit 60 or more 3-pointers in his first season … Set a UK record with a minimum of 50 free-throw attempts for free-throw percentage … He made 87 of 93 for the season at 93.5 percent … Shot 98.3 percent in league play, which also set a new standard … Was particularly spectacular this season on the road and was the only freshman in the country to average at least 15.0 points, while shooting at least 50.0 percent from the field, at least 35.0 percent from 3 and at least 90 percent from the line in true road games … Knocked down the game-winning 3-pointer with 25 seconds to play in the Sweet 16 vs. No. 11/9 Houston and then hit two free throws nine seconds later to cap a 19-point performance in the win … Developed into one of UK’s best on-ball defenders, including a superb effort vs. No. 19/19 Wofford’s Fletcher Magee, the NCAA’s all-time career 3-pointers leader … Magee went 0 for 12 from 3, mainly with Herro on him … Scored 14 points in his first career NCAA Tournament game against Abilene Christian … Posted 20 points, six rebounds and a pair of steals in the SEC Tournament win over Alabama … Scored 16 points with six boards in the home finale against Florida … Poured in 20 points on 8-of-12 shooting and three steals at Ole Miss … Drained a career-high 29 points at home against Arkansas … Was 9 of 10 from the floor, 5 of 6 from behind the arc and 6 of 6 at the foul line vs. the Razorbacks … The five 3-pointers vs. Arkansas were a career high as well … Double-figure scoring efforts from Jan. 29 to Feb. 26, including his first career double-double with 15 points and 13 rebounds in an upset of No. 1 Tennessee … Scored 19 points on 6-of-8 shooting with six rebounds at Florida … Had 12 points, including a late 3-pointer, to help stave off a furious late-game rally by Mississippi State on the road … Had 20 points in the road win at No. 14/12 Auburn, including 10 points over the final five minutes of game clock to clinch a win … Logged 21 points with three 3-pointers and five boards against Texas A&M … Broke out with 24 points, five rebounds, two steals and a block in a win at Louisville … Was named the Wayman Tisdale National Freshman of the Week following the performance which marked his first career 20-point effort … Had 15 points and five assists in an upset of No. 9/10 North Carolina in the CBS Sports Classic … Charted 16 points, eight rebounds and a career-high five steals in the win over Monmouth … Had 15 points and a career-high seven assists against Winthrop … Logged 18 points, five steals and three assists in a win over North Dakota … Made his first career start against No. 4/3 Duke and had 14 points, nine rebounds, five assists and two blocks.

Bahamas: Led the team with 17.3 points per game … Also added 2.3 rebounds and 1.8 assists … Had 15 or more points in all four games, including a game-high 22 against San Lorenzo … Shot 57.5 percent from the floor, 44.4 percent from long range and a perfect 100 percent from the charity stripe.

Enjoyed one of the most prolific seasons of any player in the country his senior season … Averaged 32.9 points, 7.4 rebounds, 3.6 assists and 3.3 steals per game as a First Team All-State selection … Shot better than 50 percent from the floor and 43.5 percent from behind the arc … Eclipsed more than 100 makes from 3-point range … Scored 40 or more points eight times as a senior and finished his career as a 2,000-point scorer … Tabbed the top-ranked recruit from the state of Wisconsin and was rated No. 30 overall by ESPN … Rated as the No. 36 overall player by Rivals and 38th-best player by 247 Sports … Suited up for the Jordan Brand Classic game and participated in the Nike Hoop Summitt … Also was one of 54 players selected for the USA Basketball Junior National Team minicamp his senior season.

Born Jan. 20 in Milwaukee … Major is undeclared/exploratory studies in agriculture … Parents are Jen and Chris Herro … Has two brothers, Austin and Myles… Favorite activity away from the court is playing Fortnite … Lists someone as a true hero as a person who can impact people on and off the court … Father has been his biggest influence … Most memorable moment as a player was scoring 2,000 points in high school … Chose Kentucky over Wisconsin, Arizona, Florida and Villanova.