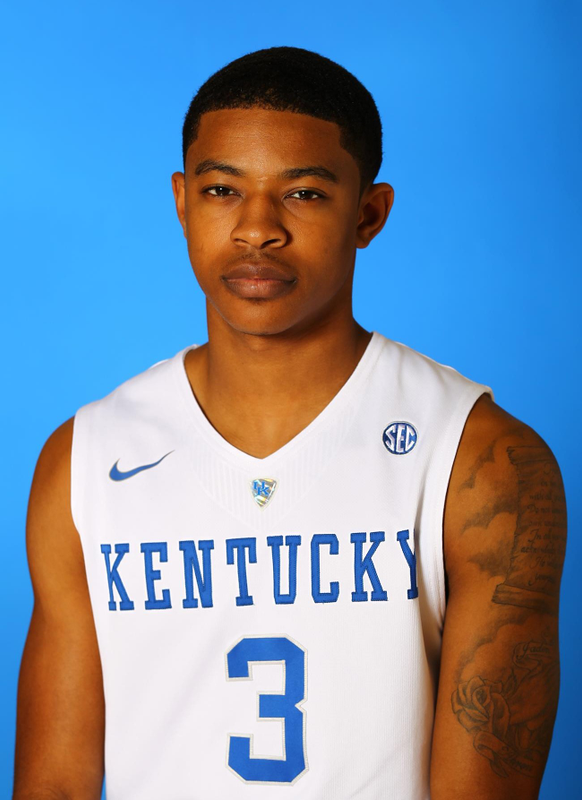 Consensus first-team All-American, the 21st Wildcat in school history to earn the distinction … Shortest consensus first-team All-American since Pittsburgh’s Don Hennon (5-foot-9) in 1958 … First Bob Cousy Point Guard of the Year winner in school history … Named SEC Player of the Year by both the league’s coaches and the Associated Press … Tabbed SEC Defensive Player of the Year by the league’s coaches in addition to All-SEC First Team honors and SEC All-Defensive Team honors … Just the second player in league history (Anthony Davis being the other) to win SEC Player of the Year and SEC Defensive Player of the Year in the same season … Named an All-American by Sporting News (first team), the Associated Press (first team), the NABC (second team) and USBWA (second team), the four NCAA-recognized All-America teams … Also named to USA Today’s All-America First Team, CBS Sports’ All-American First Team and Sports Illustrated’s All-America Second Team … Made the Wooden All-American Team … Tabbed the USBWA District Player of the Year … Named the SEC Tournament MVP after averaging 24.0 points and 5.0 assists in three games in Nashville while leading UK to an SEC Tournament championship … Finalist for the John R. Wooden Award, the Naismith Trophy and the Oscar Robertson Trophy, all awarded to the national player of the year … Also named a finalist for the Bob Cousy Point Guard of the Year Award … Earned the Capital One Cup Performance of the Week on Feb. 17 … Named College Basketball Talk’s national player of the week on Dec. 28 … Named to the NABC District 21 First Team … Three-time SEC Player of the Week … Set the new UK single-season assist mark with 246 dimes … Posted a streak of 28 games with four or more assists, the longest streak in school history since at least 1972-73 … One of four players in the country to average at least 17.3 points and 7.0 assists … Led the SEC in both assists per game (7.0) and assist-to-turnover ratio (3.6), ranking in the top 10 nationally in both categories … Completed the season with a school-record 14 20-point, five-assist games … Also had three 20-point, 10-assist games, the most in the SEC in the last 20 seasons, according to the SEC Network … Averaged 8.4 assists with a 4.5 assist-to-turnover ratio in league play … Played 672 of a possible 725 minutes in SEC games, only committing a turnover every 19.8 minutes per game … Averaged a team-best 24.4 points and a team-high 7.6 assists in UK’s seven games vs. ranked opponents, shooting 54.2 percent with a 3.8 assist-to-turnover ratio in those games … Played 291 of the possible 295 minutes vs. UK’s ranked opponents, including all 45 minutes in all three of the overtime games … Only the third player in school history with 200 or more assists … Moved into 10th place on UK’s all-time assists chart with 381 assists … Scored in double figures in 21 straight games to end the season … Scored in double figures in all but five games he played in … Started in all 35 of his appearances in 2015-16 … Posted a team-high eight double-doubles, seven of them of the points-assists variety … Joined Cliff Hagan as one of only two players in school history to average at least 24 points per game in a single SEC Tournament … He became one of only three UK players with at least 30 points scored in an SEC Tournament championship game when he scored 30 vs. No. 17 Texas A&M … With a 30-point, five-assist effort en route to MVP honors of the SEC Tournament championship, he became the first UK player with at least 30 points and at least five assists in a game since Tayshaun Prince vs. Iowa on March 17, 2001 … Played all 135 minutes in UK’s three overtime games, posting a 26.0 scoring average, 8.0 assists per game and a 3.1 assist-to-turnover ratio … Dished out a career-high 14 assists in the regular-season finale vs. LSU, a school high vs. an SEC opponent and only the fifth player in school history to dish out at least 14 assists in a game … Set a single-season program record with seven games of 10 or more assists … Scored 25 or more points in three of the final four games of the season, averaging 23.0 points during that stretch … Posted back-to-back double-doubles at Florida (19 points, 11 assists) and vs. LSU (14 points, career-high 14 assists) to end the regular season … Back-to-back double-doubles at Texas A&M (22 points, 11 assists) and at home vs. Alabama (19 points, 10 assists) … Posted 10 or more assists in six of nine games from Feb. 6 to March 5 … During that stretch, became the first player since at least 1972-73 with at least eight assists in six straight games … Sensational game at South Carolina with 27 points and 12 assists … Double-double at home vs. Florida with 18 points and 11 assists … Scored 20 or more points in five straight games from Jan. 21 to Feb. 2 … Posted 26 points and eight assists at No. 4 Kansas, the first Kentucky player with at least 26 points and at least eight assists in a game since Jack Givens against Auburn on Feb. 23, 1976 … Notched a double-double with 17 points and a career-high 10 rebounds at Auburn, just missing out on a triple-double with another eight assists … In games vs. Ole Miss and at LSU, became the first UK player with at least 20 points and at least six assists in consecutive SEC games since Ed Davender on Feb. 24 and March 2, 1988 … With 23 points at LSU, became the first UK guard to score at least 20 points in three consecutive games since Jodie Meeks on Feb. 10, 14 and 17, 2009 … Against Louisville and Ole Miss, became the only Wildcat since at least 1972-73 with consecutive games of at least 20 points and at least eight assists … In the win over Ole Miss, became the first player in school history to post at least 20 points, at least 10 assists and at least six steals in a game in school history … The 20-10 game vs. Ole Miss marked the first-double-double of his career … The six steals was a career high … His nine assists vs. UCLA was the most by a Wildcat in a nonconference road game since Saul Smith on Dec. 16, 2000 … Missed the Illinois State game with an elbow injury … Led the team in scoring 13 times, in steals 20 times and in assists 29 times.

Freshman: Named to the All-SEC Freshman Team by the league’s coaches … Won USBWA Wayman Tisdale Freshman of the Week on Dec. 30 … Earned SEC Freshman of the Week honors on Dec. 29 … Was named the Bluegrass Sports Commission MVP of the annual Kentucky-Louisville game … Appeared in 37 games in his first season … Finished second on the team in total assists with 135 dimes and first in assists per game with a 3.6 average … His 3.6 assist-to-turnover ratio per game finished the season ranked third in the country and first in the SEC … Led UK in assists in 20 games, tied for the most on the team … Dished out five or more assists in 12 games … Did not commit a turnover in any of the last four games … Led UK in 3-point percentage at .429 … Posted a 17-to-4 assist-to-turnover clip in the NCAA Tournament … Scored six points and recorded two steals in the Final Four game vs. Wisconsin … Hit a critical 3-pointer late in the game vs. No. 8 Notre Dame to help the Cats win the Midwest Regional … Posted nine points, five assists and three steals in the NCAA Tournament victory over Cincinnati … Opened his NCAA Tournament career with 11 points, three assists and three steals vs. Hampton … Averaged 7.0 points, 5.3 assists and 2.0 steals in three SEC Tournament games … Recorded four or more assists in all three SEC Tournament games … Scored a career-high-tying 14 points with two 3-pointers in just 22 minutes in a home win over No. 18 Arkansas … Notched 10 points in 16 minutes in a dominating home victory vs. Auburn … Tallied eight points and six assists on the road at Tennessee … Poured in eight points thanks to two 3-pointers at home vs. Georgia … Notched six points and six assists at South Carolina … Netted 11 points and three treys at Alabama … Dished out seven assists in the SEC opener vs. Ole Miss … Scored a career-high 14 points in his first true road game of his career at No. 4 Louisville … Posted seven points, a career-high seven rebounds and six assists in just 18 minutes in the rout of UCLA … Averaged a team-best 5.8 assists during a four-game stretch from Dec. 13 to Jan. 6 … Missed two games in early December with a leg injury … Made both of his 3-point attempts vs. UT Arlington en route to an eight-point, five-assist game … Recorded 12 points and six assists in just his second career game vs. Buffalo.­­

Two-time Illinois All-State selection and Southtown Star Player of the Year … He capped his career at Marian Catholic as the all-time leading scorer (2,335), leader in assists (578) and steals leader (283) … Averaged 23 points, 6.8 assists and 3.7 rebounds as a senior while leading Marian to 28 victories and its second straight appearance in supersectionals … Was selected to both the McDonald’s All-America and Jordan Brand Classic games … Scored five points and added a trio of assists and rebounds in the McDonald’s game … Posted nine points and a team-high nine assists in the Jordan contest … Ranked No. 20 overall in the class of 2014 by Scout and third at his position … Rivals lists him at No. 21 overall and seventh at point guard, while ESPN ranks him at No. 25 overall and fourth at his position.

Son of James Ulis and Kelly Reed … Born on Jan. 5, 1996 … Has four brothers, Ahron, Jaden Reed, Anton Porter and James … Chose Kentucky over Michigan State, Iowa and Southern Cal … Two cousins, Travis Walton and Jamar Butler, played college basketball at Michigan State and Ohio State, respectively … Chose No. 3 because he idolized Allen Iverson when he was younger … His biggest influence in life is his parents … His most memorable moment as a basketball player was hitting a game-winning half-court shot in the seventh grade championship game … When he was young he wanted to be an NBA player when he grew up.