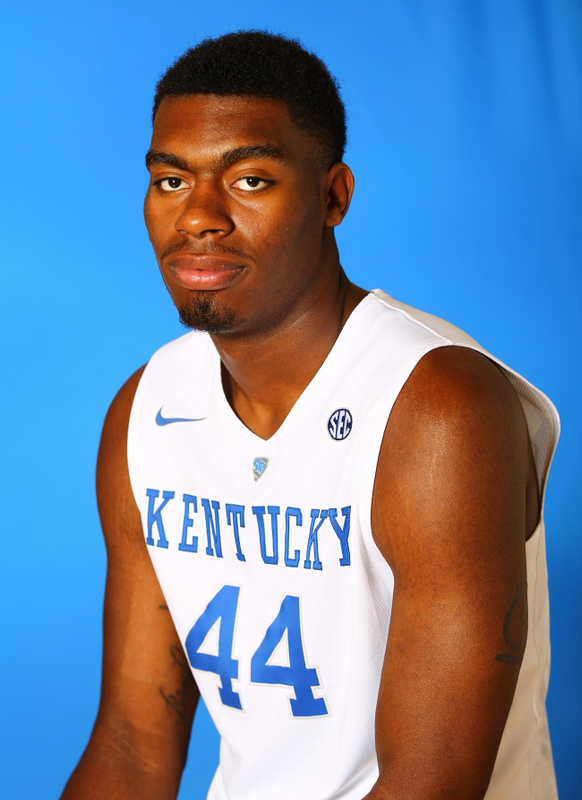 2014-15 (SOPHOMORE) Appeared in all 39 games for the Wildcats … Averaged 6.4 points and 4.6 rebounds in 16.4 minutes per game while connecting on 50.6 percent of his shots from the field … Registered career bests in points per game, rebounds per game, free-throw percentage, blocks, steals and assists during his sophomore campaign … Poured in 12 points and snatched six rebounds in the win over West Virginia … Scored seven points in 12 minutes of play in the NCAA Tournament opening-victory over Hampton … Posted a career-high 13 points and six rebounds on 6 of 7 made field goals in the dominating home victory over Auburn … Earned his second career double-double with 10 points, two blocked shots and a career-high 13 rebounds in a win over South Carolina at home … Had seven points, four rebounds and two blocks at LSU … Notched eight points and seven boards at Missouri … Registered double-figure scoring efforts in consecutive wins over Vanderbilt and Alabama … Had five points and career-highs in assists (six) and blocks (four) in the win over UCLA … Registered seven points, five rebounds, two blocks and a career-high three steals in the win over No. 21 North Carolina … Scored 11 points and added six rebounds in 19 minutes of action against No. 6 Texas … Strung together four consecutive games in double-digit scoring in wins over Kansas (11), Boston (11), Montana State (13) and UT Arlington (12) … Had nine points and 12 rebounds in the win over Buffalo … Opened the season with his first career double-double effort in a win over Grand Canyon with 10 points and a career-high 13 rebounds.

HIGH SCHOOL: Averaged 17.0 points, 11.0 rebounds and 4.3 blocks per game in his only season at Montverde Academy … Johnson led his high school squad to a national championship at the National High School Invitational where he claimed MVP honors after logging 18 points and eight rebounds … Johnson was a McDonald’s All-American as well as a Jordan Brand Classic selection … He notched 12 points and five rebounds in the McDonald’s game, while pouring in eight points and snagging four rebounds at the Jordan Classic … In addition to his high school accolades, Johnson suited up for Team USA Basketball’s U17 squad in the summer of 2012 where he averaged 20 points and five boards a game for the world champions … Johnson is rated as the No. 11 overall player by ESPN and the top player at his position … Rivals ranks him as the No. 9 overall player and Scout lists him at No. 18.