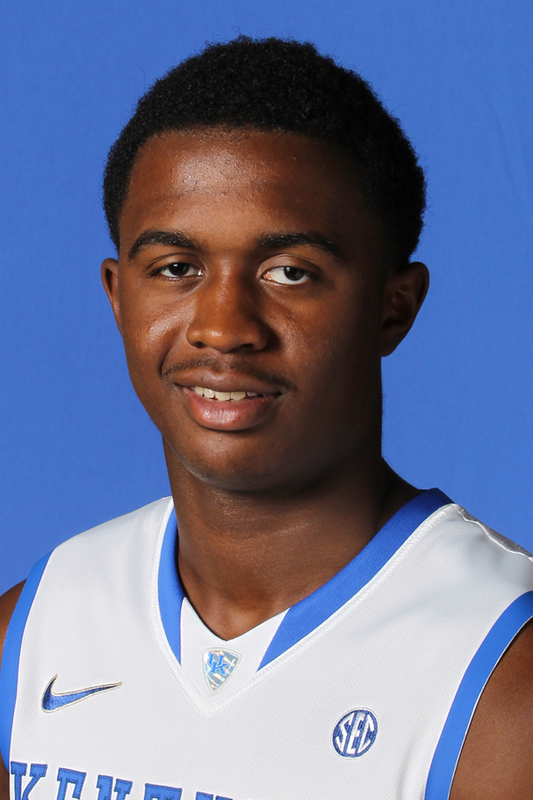 Freshman: Played in all 38 games, starting 14, averaging 12.3 points per game … Connected on 3-of-5 3-point attempts vs. UConn in the Final Four … Nailed his only two 3-point attempts vs. UNC … Hit two 3-pointers vs. Ohio St. in NCAA?Tournament … Led UK for the second straight game with 15 points vs. Alabama in the SEC Tournament semifinals … Led UK with 19 points vs. Ole Miss in the SEC Tourney quarterfinals … Scored 18 points vs. South Carolina at home … Totaled 20 points on 7-of-8 shooting vs. Miss. State … Had a career high three steals at Florida … Had 20 pts. and three assists against Ole Miss … Scored a team-high 19 points in home win over Georgia … Sealed win at South Carolina by hitting four-straight free throws … Started his third-straight game at Alabama, logging a career-high 39 minutes … Started his second-straight game against LSU, logging a team-high five assists … Averages 4.7 assists per game when starting … Dished out a career-high seven assists against Auburn, his first collegiate start … Scored 18 pts. against Georgia … Scored 17 pts. vs. Coppin State … Set a then-UK freshman record with 32 pts. on 11-of-12 shots from the field and 7-of-8 from behind the arc against Winthrop … Scored 16 pts. against MVSU … Scored 24 points on the road against North Carolina … Hit 3-of-4 3-pointers against UNC and was 7-of-12 from the field … Shot a career-high eight free throws against UNC and made seven, also a career best … Shot 5-of-9 from the field against Boston with two 3-pointers … Scored 13 pts. and pulled down three rebs. while tying Darius Miller with a game-high three 3-pointers against Portland … Was the first sub off the bench against Portland … Scored 20 points in his collegiate debut, shooting 7-of-10 from the field against ETSU, including 3-of-5 shooting on 3-pointers, three assists and five rebounds … Along with Terrence Jones, became the first freshman duo in UK history to score 20 points in a debut.

Averaged 23 points, six rebounds, and four assists his senior season … Played two years at renowned Oak Hill Academy in Mouth of Wilson, Va. … Received McDonald’s All-America and Jordan Brand Classic All-America honors … Scored 12 points in McDonald’s All-American game in helping lead the West to 107-104 win … Scored 11 points in helping lead the West to a 129-125 win at the 2010 Jordan Brand Classic All-American game … Ranked as the fifth best shooting guard of 2010 by Scout.com, third best shooting guard and No. 21 overall prospect of 2010 by Rivals.com and No. 29 overall prospect by ESPNU.