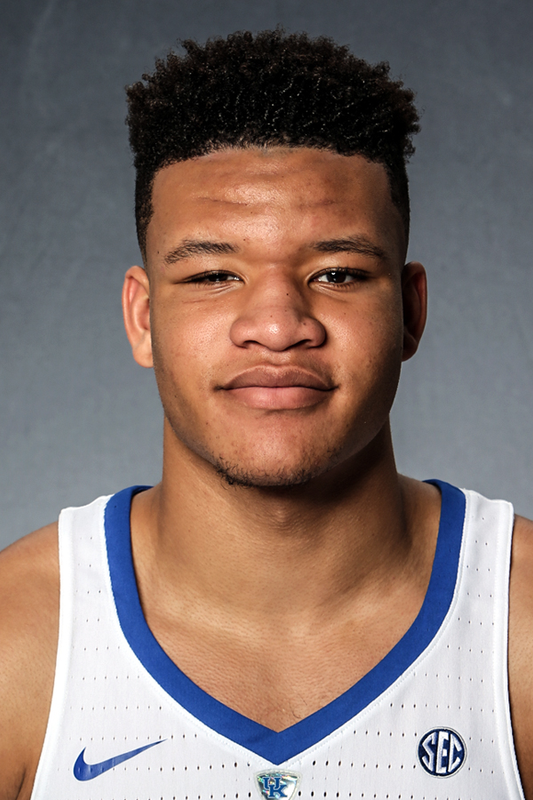 Freshman:  Selected ninth by the New York Knicks in the 2018 NBA Draft …Associated Press All-America honorable mention … Tabbed Southeastern Conference Co-Freshman of the Year alongside Alabama’s Collin Sexton … Also named to the All-SEC First Team and SEC All-Freshman Team by the league’s coaches … Made the SEC All-Tournament Team … United States Basketball Writer’s Association District IV Team member … Led the team in scoring (15.8) points per game, 3-pointers made (57), and one of only two players on the team (PJ Washington) with 200 or more rebounds … Recorded the eighth-most points (576) in school history as a freshman … Scored in double figures in all but seven games, including a team-high 10 games with 20 or more … Started all 37 games … Named Citizen Naismith National Player of the Week, Oscar Robertson National Player of the Week (United States Basketball Writers Association), Wayman Tisdale Freshman of the Week (USBWA) and SEC Freshman of the Week for the week of Jan. 29 for his performance vs. Mississippi State and No. 7/7 West Virginia … Scored in double figures in 13 of 14 games to end the season … Went for 25 points on 8-of-16 shooting in the NCAA Tournament opener vs. Davidson … Posted 18 points and seven rebounds in the SEC Tournament championship game vs. Tennessee to lock up SEC All-Tournament Team honors … Recorded three straight games with 20 or more points vs. Arkansas, Missouri and Ole Miss … Made a 3-pointer in 10 straight games from Feb. 10 to March 11 … Made three or more 3-pointers in three of four games from Feb. 10-20 … Dished out a season-high-tying four assists to go along with 18 points at Texas A&M … Erupted for a game-high 34 points in a 17-point comeback victory at No. 7/7 West Virginia … Made a season-best five 3-pointers vs. the Mountaineers … Also made 7 of 8 from the line and grabbed seven rebounds … The 34 points were the most by a Wildcat in the 2017-18 season and most by a UK player since De’Aaron Fox scored 39 vs. UCLA in the 2017 Elite Eight game vs. UCLA … It was the most points by a Wildcat on the road since Malik Monk recorded 34 points to begin SEC play for the 2016-17 season … Made all four of his 3-point shots and 5 of 6 shots overall in the home victory vs. Mississippi State en route to 19 points … Scored 21 points and grabbed eight rebounds at South Carolina … Posted 17 points, many of them late with the game on the line to close out a road win at Vanderbilt … Also made all seven of his free-throw attempts at Vandy … Connected on all five of his shots and scored 15 points in a home win vs. Texas A&M … Notched the second double-double of his career with 16 points and a career-high 11 rebounds at LSU … Scored 20 or more points in three of four games from Nov. 26 to Dec. 16 … Included in that stretch were 10 of 11 games in double figures to open his career … Also dished out three or more assists in three straight games from Dec. 9-23 … Scored 21 points in a home victory over Virginia Tech … Recorded 20 points and seven rebounds vs. Harvard … Scored a then-season-best 25 points vs. UIC … Notched his first career double-double with 17 points and 10 rebounds vs. ETSU … Also made a then-career-best four 3-pointers vs. ETSU … On a national stage at the State Farm Champions Classic vs. No. 4/3 Kansas, scored 20 points for the first time in his career with three 3-pointers and seven rebounds … Debuted at Kentucky with 12 points, six rebounds, four steals and four assists … His steal and assist numbers would hold up as career bests.

Considered a top-10 prospect by Scout, Rivals and ESPN, all of which list him as the second-best player at his position … He is the No. 17 overall player rated by 247Sports … The 2017 Mr. Florida winner averaged 28.5 points and 11.3 rebounds a game for Tampa Catholic as a senior where he finished his career scoring 2,760 total points … He led the Crusaders to a 25-6 record during his senior season, including a runner-up finish in the state championship game … As a junior, he averaged 30.1 points, 11.2 rebounds and 2.4 assists per game, leading his team to district and regional titles as well as an appearance in the state semifinals … He owns Tampa Catholic’s school record with 55 points in a game … A 2017 McDonald’s All-American, he scored 15 points and added three rebounds in that contest … Played in the Jordan Brand Classic and scored 12 points … He is a 2017 Naismith High School All-America Second Team selection, as well as the 2016 USA Today All-USA Florida First Team member … A three-time All-State First Team selection, Knox has been a mainstay with USA Basketball … Won two gold medals with USA Basketball at the 2015 FIBA Americas U16 Championship and the 2016 FIBA U17 World Cup … He started all six games in 2016 for a team that went 7-0 to win gold … He averaged 11.2 points and 4.5 rebounds, while also snagging a combined 13 steals … During the 2015 run, he averaged 10.6 points and 4.6 rebounds per game … A minor hamstring injury kept him out of the 2017 FIBA U19 World Cup … An honor-roll student … Started on the football team until he began focusing on basketball during his junior season … Participated in community service projects with Goodwill, Salvation Army and the Boys and Girls Club of America.

Born Aug. 11 in Phoenix … Major is undeclared/exploratory studies in agriculture … His parents are Michelle and Kevin Knox … Siblings include Kobe, Karter and Ashley … Father was a wide receiver for Florida State and a member of the 1993 national championship team … Wears a size 18 shoe … Chose his number because he likes single digits … Lists a true hero as someone with the following characteristics: courage, character and trustworthiness … Chose Kentucky over Duke, North Carolina, Florida State and Missouri.