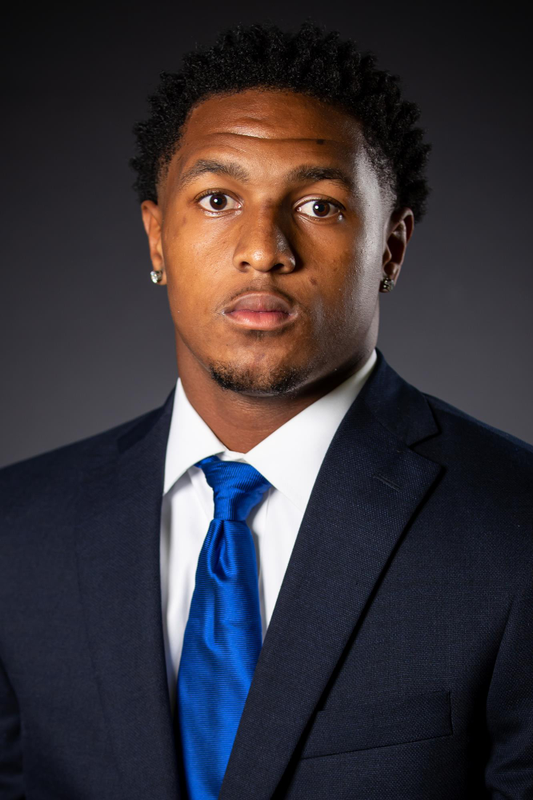 2022 – Senior
• Saw action in nine games
• Totaled six catches for 65 yards and a score
• Got his first catch of the season vs. South Carolina, a career-long 10-yard grab
• Scored the first touchdown of his career on a three-yard reception in the third quarter against Mississippi State to take, and eventually hold, the lead in the game … Had a career-best four catches on a career-best 42 yards, while he also had a career-long 21-yard catch

2021 – Junior
• Saw action in six games, missing action due to a knee injury mid-season
• Totaled two catches for four yards and also had a punt return for 12 yards vs. New Mexico State
• Got his first collegiate reception vs. ULM and also had a catch vs. Louisville

2018 – Freshman (at UCF)
• Appeared in seven games as a defensive back and totaled four tackles
• Made his collegiate debut vs. SMU on Oct. 6
• Recorded his first collegiate tackle vs. Temple on Nov. 1

High School
• Helped guide Windermere Prep to the Sunshine State Championship Game as a senior in 2017, his lone season of football
• Rushed for 359 yards and six touchdowns, while recording 306 yards receiving and three scores
• Posted 154 kick return yards and 156 punt return yards with one touchdown as a senior
• Made 83 tackles with three sacks, one interception and two fumble recoveries, including a fumble recovery for a touchdown as a senior
• Took the Lakers to the state semifinals
• Two-sport athlete (football and basketball)
• Played two seasons of basketball

Personal
• Born in Orlando, Florida
• Son of Tatyana McCall and Ray Lewis
• Siblings are Diaymon, Ray, Rayshad, Rayven, and Ralin
• Father, Ray, played 17 seasons in the NFL and was a 13-time Pro Bowler, 10-time All-Pro, two-time NFL Defensive Player of the Year, a member of the NFL 2000s All-Decade Team, two-time Super Bowl champion and Super Bowl XXXV MVP, as well as a two-time All-American at the University of Miami
• Major is community and leadership development

Rahsaan Says
• His nickname is “Fat”
• He chose Kentucky because it was a great opportunity
• Three words to describe him are funny, purpose-driven, and real
• His sports heroes are his dad and Kobe Bryant because of their mentality and love of the game
• The three famous people he would invite to his fantasy dinner are Kobe Bryant, Bob Marley, and Steve Jobs