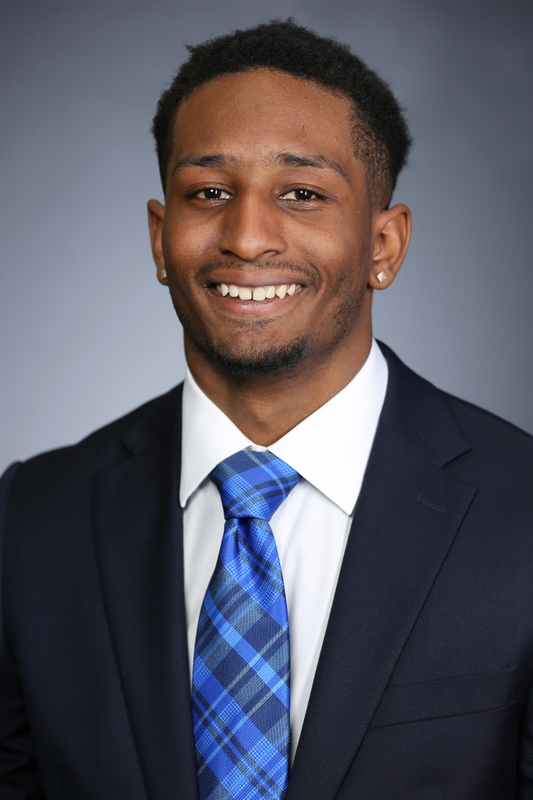 2022 – %Super Senior
• Elected to return for a sixth year, taking advantage of the NCAA’s ruling to grant an extra year of eligibility due to the COVID-19 pandemic
• Four-year leƩ er winner who has played in 49 career games with 23 starƟ ng assignments
• Has totaled 121 tackles, nine pass breakups and four intercepƟ ons in his career

2020 – Junior
• Started at safety in 10 of 11 games played
• Totaled 48 tackles, an interception, a forced fumble, a PBU and a blocked kick
• Blocked a field goal attempt in the second quarter vs. No. 23 NC State in the Gator Bowl, the first blocked kick of his career and UK’s second blocked field goal of the season, also Jamin Davis vs. Georgia
• Made a career-high seven tackles vs. the Wolfpack
• Had his third career interception in the win over No. 18 Tennessee

2019 – Sophomore
• Played in 12 games with two starting assignments (Florida and Miss. State) at safety
• Totaled 17 tackles, an interception and a PBU
• Recorded a career-high tying three tackles vs. Vanderbilt, Eastern Michigan and at South Carolina
• In his first career start, had two tackles and an interception vs. Florida, his second career INT
• Dean’s List (Fall 2019)
• Named to SEC Fall Academic Honor Roll

2018 – r-Freshman
• Saw action in all 13 games
• Finished the season with 10 tackles, three PBUs and one INT
• Made his first career interception and also had a pass breakup in Kentucky’s 28-7 win over Mississippi State … With MSU threatening to tie the game early in the fourth quarter, his third down pass breakup forced a punt … On the next possession, with MSU again threatening to  tie, he intercepted a pass and returned it 35 yards … His long return set up a touchdown run on the next play, giving UK a two-TD lead
• Recorded two tackles vs. Murray State, his first career action

High School
• Combination athlete in high school, playing defensive back, wide receiver and quarterback
• Four-star prospect by 247Sports, Rivals and ESPN
• Rivals ranks him the No. 10 overall prospect in the state of Ohio and the No. 23 athlete in the class of 2017
• ESPN has him as the No. 8 safety in the country
• Four-year letter winner and three-year starter for Coach Jamie Masi at Madison Comprehensive
• First-team OCC All-Conference and honorable mention second-team All-Northwest Ohio in 2016 after averaging 9.0 tackles per game
• Nominated for the 2017 U.S. Army All-American Bowl
• Had three interceptions and 54 tackles as a junior, along with 783 receiving yards, 551 rushing yards and 19 touchdowns
• OCC Off ensive Player of the Year and first-team Offense All-Northwest Ohio in 2015
• Also excelled on the basketball court, becoming a member of Madison’s 1,000-point club during his senior season
• Chose Kentucky over Michigan, Michigan State, and West Virginia

Personal
• Name is pronounced “Ajian (a-jun)”
• Born in Ashland, Ohio
• Son of Nikki Ajian and Burton Hester
• Graduated in May of 2022 with a degree in family science and a minor in coaching … Currently working on a second degree in communication with a minor in sociology