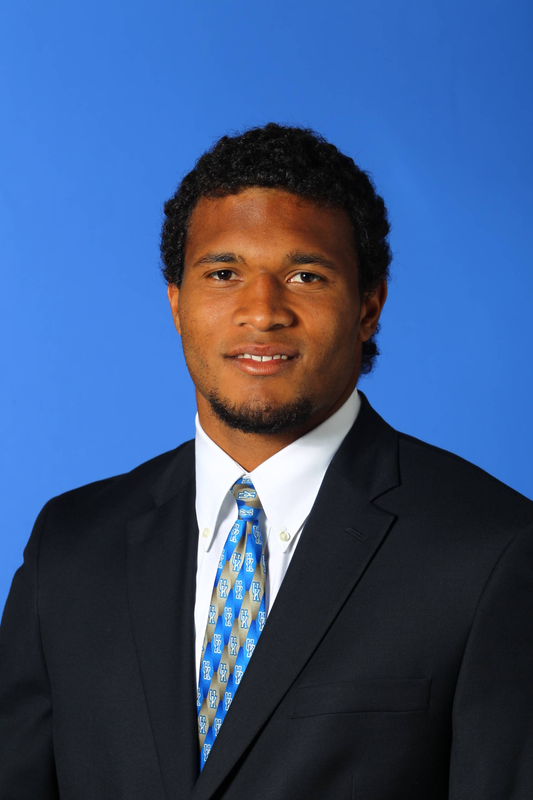 His move from safety to linebacker was one of the best developments of spring practice … Stationed at weakside linebacker and showed good aptitude at the new position … Also contributes on special teams … Twin brother of fellow Wildcat Zack Blaylock … Has played in 23 games, including one start.

2013 (Sophomore): Posted 17 tackles playing in all 12 games … Recorded a tackle in 10 of his 12 games … Posted four tackles vs. Alabama State for a season high … Spent a majority of snaps on special teams.
2012 (Freshman): Played in last 11 games of the season, including one start … Made 14 tackles, with a season high of five at Arkansas … Had four tackles and a pass breakup in his first collegiate game, UK’s win over Kent State … Also broke up a pass at Tennessee.
High School: Played both safety and linebacker in high school … Second-team all-state in Class AAAAA by the Georgia Sports Writers Association … Played at Walton HS in Marietta, Ga. … Helped Walton to a 14-1 record and state runner-up finish in Class AAAAA … Ranked as the No. 31 inside linebacker in the nation by 24/7 Sports … One of the nation’s top-100 linebackers by Scout.com … Posted 75 tackles and an interception during his junior season … Has been timed in the 4.5-second range in the 40-yard dash, an excellent time for a linebacker … Coached by Rocky Hidalgo … Also ran track in high school, competing in the 100- and 4-400-meter dashes, along with the 4×100-meter relay.
Personal: Born in Atlanta, Ga. … Name pronounced same as “Darren” … Son of Janelle Woods and John Woods … Also son of Mookie Blaylock, who played 13 years in the NBA with New Jersey, Atlanta and Golden State … Daron plans a major in integrated strategic communications.
Community Cats: Worked at the Big Blue U Move-In (2012) … Participated in an event with the Special Olympics (2013).
Daron Says … My favorite college class so far is: computer integrated studies … Other than the NFL, my dream job is: pro snowboarder … If I could witness any event, past, present or future, it would be: Woodstock … My hidden talent is: Guitar Hero … Something people might not know about me is: I have a voice of Fergie and Jesus combined when I sing.