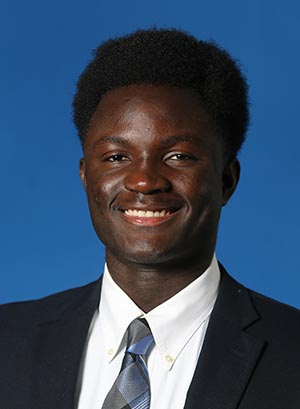 • Recorded 39 tackles, including nine TFL, two sacks and 13 quarterback hurries in 2016 for coach Tommy Lewis at Victory Christian Academy
• Also had two forced fumbles, a fumble recovery and an interception
• Named second-team All-Polk County by the Lakeland Ledger and Florida AP All-State Class 2A honorable mention as a senior in helping the Storm finish 13-2 overall
• Member of the 2014 State Championship team
• Named to the Southeast Super-Region Team by the National Christian School Athletic Association
• Transferred to Victory Christian in 2016 after playing at Dade Christian
• Also a star player on the basketball court and competed in the shot put, discus and 400 meters
• School-record holder and back-to-back regional champion in the shot put
• Named second-team All-Dade as a junior
• Averaging 23.0 points and 13.0 rebounds as a senior, compiling over 1,400 career points
• Chose Kentucky over Florida, Florida Atlantic and Florida International

• Name is pronounced “Abule (ah-BOO-lay) Abadi (ah-BODY)”
• Originally from Yenagoa, Nigeria
• Moved to Florida at the age of 12
• Son of Steve and Teri Fitzgerald
• Major is communication

• His nickname is “A.B.” or “A-Bizzle”
• He chose Kentucky because it’s a great place with good people who care about you and want to make you great
• One word to describe him on the field is “Lion”
• Other than playing in the NFL, his dream job is to be a successful businessman
• What he most looks forward to this season is getting better as a player and as a student