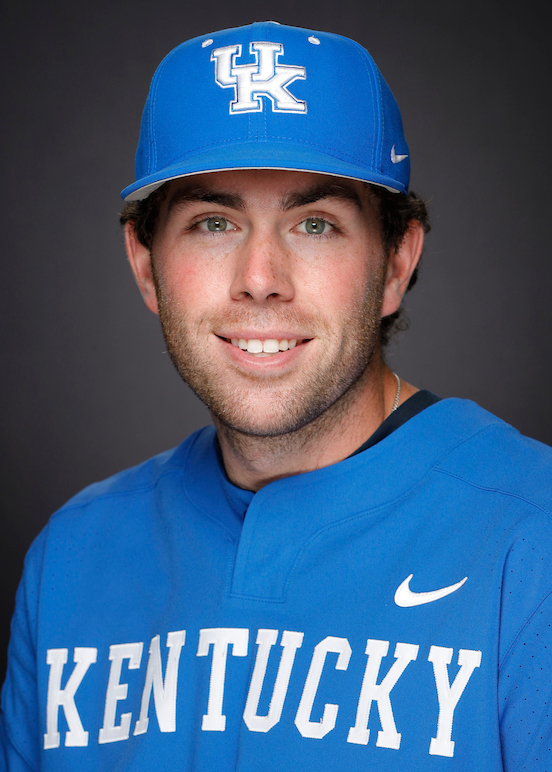 2017 SUMMER
Played in 20 games with the Amsterdam Mohawks of the Perfect Game Collegiate Baseball League…Crushed it at the plate, hitting .375 with four doubles and five home runs in 72 at bats…Drove in 24 runs, scored 15, was hit by three pitches and walked nearly as many times (10) as he struck out (14)…Slugged .639 on his way to a ridiculous 1.104 OPS…Was named a PGCBL All-Star and Player of the Week…Baseball America tabbed him the top prospect in the PGCBL…Suffered a broken foot just before the all-star game after being hit by a pitch.

2017
Appeared in 20 games with two starts as the designated hitter…Did not play until 3/18 due to a knee injury and could not play the field due to ongoing rehabilitation on that injury…Served as the first base coach for much of the season…Both starts came in the Cats’ road series vs. Missouri…Hit a grand slam in his second career at bat, depositing a bomb over the LCF wall in a pinch hit appearance against Ole Miss on 3/23…It was his first career hit…Had a two-run single vs. Tennessee on 5/12…Produced six RBI in just 23 at bats…Was hit by two pitches.

HIGH SCHOOL
Ranked as the No. 5 catcher and No. 73 overall player in the high school class of 2016 by PerfectGame.org… Named to all-state team all four varsity years …  Owns school record in single-season home runs (17), RBI (51), and walks (45)… Led team to state runner-up finishes his junior and senior year … Held a .536 batting average with 51 RBI, 45 hits, 17 home runs and 26 runs during his sophomore campaign … Coached by Shawn Turner and Fey Spetter … His 148 career walks are a state record … Hit .458 during his senior year … Four-year Academic Honor Roll.

PERSONAL
Full name is Timothy John Collett…Prounounced “Caw-lette”…Major is Communication…Son of John and Sallee Collett…Has an older brother, Dougie (25)…Brother and father were both athletes at Rose Hulman Institute of Technology…Drafted by the Minnesota Twins in the 40th round of the 2016 MLB Draft…Worked with the Jessie Rees Foundation and part of his community service…Favorite MLB team is the Chicago Cubs…Favorite MLB player is Cubs catcher/outfielder Kyle Schwarber.