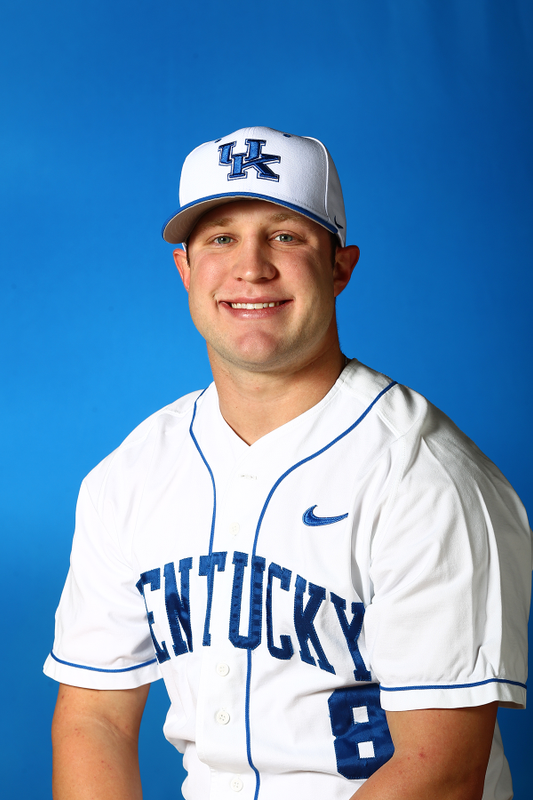 The most experienced player on Kentucky’s roster, having played in 131 career games with 110 starts…Started slow in the fall but impressed coaches with how he came on the second half of camp…A career .263 hitter in 63 SEC games…Will work counts and get on base however necessary…Doesn’t try to do too much and sprays the ball to all fields…Very good defensive player…Teammates love his toughness and team-first attitude.

Joined UK teammates Sean Hjelle and Zeke Lewis on the Elmira Pioneers of the Perfect Game League…Played in 25 games, batting .292 with five doubles, a triples and 13 walks…Scored 21 runs, drove in 10 runs and was hit by eight pitches…Team made the PGL playoffs.

Appeared in 40 games with 37 starts on the season…Batted .267 with 23 runs scored, 11 doubles, a home run and 10 RBI in 131 at bats…Was 4-of-6 on stolen base attempts…On-base percentage was .382…Was hit by nine pitches, pushing his career total to 35…Started 34 of the team’s first 36 games before injuries cut his season short…Did not appear in the final 11 games…All 37 of his starts came in centerfield…Walked a career-high three times at Georgia on 3/19…Had nine multi-hit games and eight two-strike hits on the season…Went 3-of-3 with three doubles and three runs scored against Buffalo on 3/5.

Had a strong freshman season after redshirting the 2013 season, ranking tied with Alabama’s Casey Hughston and UK second baseman JaVon Shelby for the home run lead among SEC freshman (four) … Played in 45 games with 34 starts, hitting .289 (37-for-128) with 25 runs, six doubles, four homers and 20 RBI … Had a 16-20 walk-strikeout ratio, getting plunked by 15 pitches … Had a .420 on-base percentage – third-best on the team – slugging .430 … Was better in SEC play than against non-conference competition, hitting .329 (24-for-73) in 24 games and 19 starts, with six doubles, three homers and 11 RBI … Reached base safely in 31 of his 34 starts, including a stretch of 19 consecutive in April and May … Reached base safely in 39 of his 45 games … Hit .349 (15-for-43) in 18 games at Cliff Hagan Stadium, with three homers … Hit .269 (14-for-52) with two doubles, one homer and seven RBI in 17 road games … Had UK’s second-best average in night games, hitting .356 (16-for-45) with three homers and 12 RBI … Hit .333 (3-for-9) in February, .226 (7-for-31) in March, .409 (9-for-22) in April, .305 (18-for-59) in May and was 0-for-7 in two June games in the NCAA Tournament … Was 5-for-17 in the SEC Tournament, drawing two walks and stealing a base … Was 1-for-13 in the NCAA Tournament, with three runs, three walks and a hit by pitch … Collected first career hit off the bench in UK’s win over St. Joe’s … Earned first start the following day and drove in the game-winning runs with a two-out, two-RBI knock in the late innings at Old Dominion … Was hit by a pitch in five consecutive games … Came off the bench to score three runs in a rout of Ball State … With Ka’ai Tom nursing a hamstring injury during UK’s series at Alabama, made his first three career SEC starts, collecting three hits in the series, including a 2-for-5 game in the series finale … Hit a pinch-hit homer in the ninth inning vs. Morehead State, the first ninth-inning, pinch-hit homer for the Wildcats since Gunner Glad at Coastal Carolina in 2009 … Is one of just four players since 2004 in UK history to hit ninth-inning, pinch-hit homers … Had a great series in UK’s sweep at the hands of No. 12 Ole Miss, going 5-for-8 with solo homers in the opener and finale … In UK’s series opener at Tennessee, the SEC ESPNU Thursday Night Game of the Week, had a four-RBI outing, with a double and an inside-the-park homer after the ball got behind a diving leftfielder, motoring home for his third homer in his last four games … Ran up a 12-game hitting streak from April 19-May 15 at Georgia that ended with a two-walk outing … Went 2-for-5 in UK’s 12-inning thriller vs. No. 21 Mississippi State in the SEC Tournament Semifinals … Had a breakout summer in earning all-star honors in the Prospect League for the Slippery Rock Sliders, teaming with UK righty Zach Strecker … Played in 55 games, hitting .288 (61-for-212) with 33 runs, 10 doubles, two triples, 17 RBI and a 16-21 walk-strikeout ratio … Stole 15-of-18 bases … Came off the bench in the all-star game, getting an at bat and adding a walk … Average was over .300 all summer until dropping below in the last two games of the year … Had a 4-for-5 game vs. Chillicothe and stole two bases twice.

Full name is Austin Storm Wilson … Born in Somerset, Ky. … Son of Reggie and Denise Wilson … Brother is Macon (15)… In 2017, was inducted into UK’s Frank Ham Society of Character, which honors student-athletes who have shown an extraordinary commitment to academic excellence, athletic participation, personal development, career preparation and serving as a role model …Took mission trip to the Bahamas in Dec. 2016…Working on Masters Degree in Business Administration…Favorite MLB team is the Atlanta Braves…Favorite MLB player is Derek Jeter…Favorite road trips in the SEC are LSU, South Carolina and Texas A&M…Has worn the No. 8 since childhood.