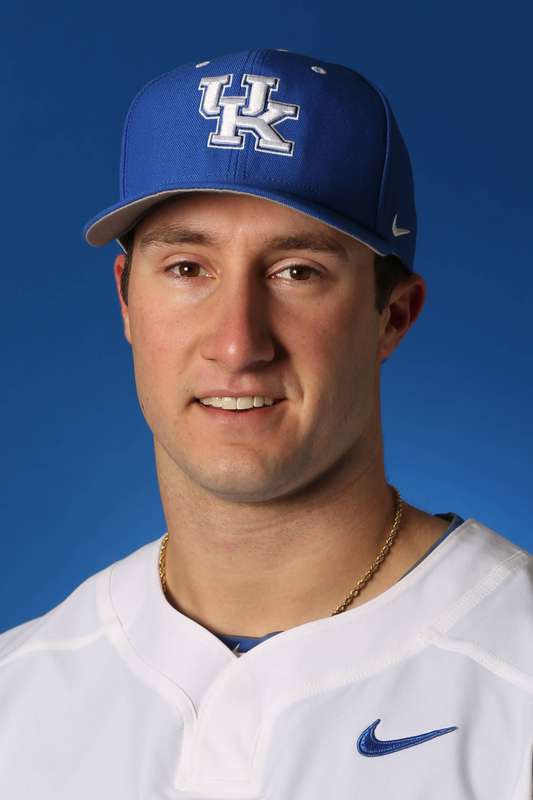 Transferred to Kentucky after serving as North Carolina’s
part-time first baseman from 2014-15, making 36 starts and cranking six homers
… Showed tremendous ability instantly in the fall, with above-average power and
a sweet left-handed swing … Primarily a first baseman throughout his career,
showed an ability to play an outfield corner during the fall.

Sat out the season after transferring from North Carolina

Played in 43 games with 33 starts, hitting .255 (26-for-102)
with 14 runs, nine doubles, two homers and 19 RBI, sporting an impressive 34-22
walk-strikeout ratio and stealing a base … Reached base safely in 33 of his 43
games, an impressive feat considering his off-the-bench appearances … Had a
.442 on-base percentage and a .402 slugging mark … As a pinch hitter, came to
the plate nine times, drawing seven walks.

Appeared in 44 games and started 26 at first base … Hit
.204 for the year with four homers and 17 RBI … His four home runs were tied
for the team high … Slugged .357 and had a .316 on-base percentage … Hit a
first-inning grand slam and had a season-high four RBI in the series opener
against Pittsburgh (3/8) … Had two RBI and a double against the College of
Charleston (2/16) … Also had multi-hit games against Appalachian State
(2/25), North Florida (3/2) and Pittsburgh (3/8, 3/9) … Solid defensive first
baseman who committed just three errors all season in 192 chances.

Strong left-handed hitter that can hit for power … Ranked
No. 117 in the country by Perfect Game … Mentioned as one of 50 “Players
to Watch” by Baseball America … Tabbed the fifth-best player in the
state of New Jersey by Perfect Game … Participated in the East Coast Showcase
along with the Area Code Games … Ranked the sixth-best first baseman in the
country by Perfect Game … Excels in the classroom … Earned First Honors every
semester … Member of Spanish National Honors Society … Coached by Martin
Kenney at Christian Brothers Academy.