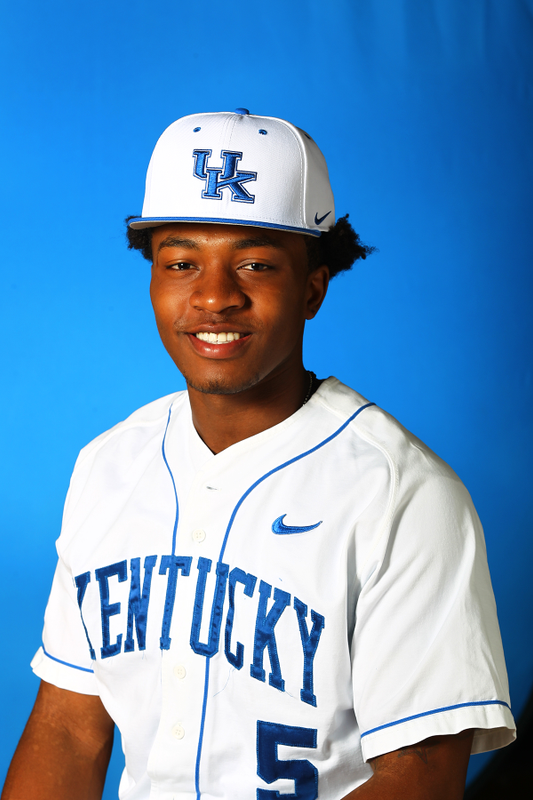 Started and played in 54 of Kentucky’s 57 games…Led the team and ranked third in the SEC with 12 home runs…Third on the team with 35 RBIs…Had three games during the season when he hit more than one homer in a game (Feb. 21 vs. Dayton, March 20 at Georgia and May 1 at Auburn)…Stole six-of-six bases…Had three hits in a game four times during the season (Feb. 20 vs. George Mason, Feb. 21 vs. Dayton, March 20 at Georgia, April 30 at Auburn)…On March 20 at Georgia, Shelby was 3-for-5 with two homers, a triple, two runs scored and seven RBIs…Ranks 29th on UK’s career list for base hits with 150.

One of the top players in collegiate baseball, is coming off first-team All-SEC selection at second base in 2015, belting nine homers … Is a preseason All-America selection in 2016 after shifting across the diamond in the fall to third base … Owns great bat speed, tremendous power potential and above-average arm strength … Is an infectious personality that can assume a key leadership role in 2016 … Can play anywhere on the diamond defensively … Has good feel for the strike zone and an ability to fight his way on base … Owns the best returning OPS in SEC play (1.073) in the league, after ranking third in 2015 … Led all SEC second baseman in assists in each of his two seasons as UK’s every day starter at the keystone … Led all SEC second baseman in RBI (44), slugging (.525) and on-base percentage (.442) in 2015 … Has sported a higher average in SEC play than in non-league action in each of his first two seasons … Drips baseball instincts and acumen, as his father, John T. is the Milwaukee Brewers first-base coach and an 11-year MLB veteran with two World Series titles … His oldest brother, John was an All-SEC second baseman and led UK to the SEC Championship in 2006 … His youngest brother, Jaren, signed his National Letter of Intent in November to play at UK and is regarded as one of the top high school players in the nation … Entering 2016, the Shelby family have combined to hit 33 home runs for Kentucky from 2004-06 and 2014-15 … Summer in the Cape Cod League was cut short after getting hit in the jaw, while in the dugout, by a foul ball.

Played in 23 games for the Hyannis Harbor Hawks in the Cape Cod League … Ripped six doubles, one homer and drove in seven runs, scoring 11 times … Had seven walks, struck out 21 times and stole one base … Summer was cut short on July 7 after getting hit by a foul ball in the dugout … Went 3-forf-5 with two doubles in his first game of the summer … Had six multi-hit games, including a pair of three-hit outings … Hit a homer on June 25.

A 37th round draft pick by the Milwaukee Brewers … Earned four letters at Tates Creek for coach Dom Fucci … Named all-city player of the year senior year … Two-time regional and district champion … Broke Tates Creek record for doubles in a season with 12 … Batted .340 as a senior … Named 2013 first-team all-region by Rawlings … Had a batting average of .300 junior year … Tabbed as 2012 underclassmen honorable mention by Perfect Game … Played football his freshman year … Was on the academic honor roll.

Full name is JaVon Taylor Shelby…Born May 6, 1995 in Lexington, Ky. …Son of Trina Shelby and John T. Shelby Jr. …Has four brothers, John T. (29), Jeremy (27), Justin (25), and Jaren (16)…Has an older sister, Tiara (22)…Brother, John, played baseball at Kentucky and was drafted by the Chicago White Sox … John is one of the more decorated performers in Kentucky history, leading UK from a last-place finish in 2005 to the 2006 SEC Championship, with John earning All-SEC honors at second base … Finished his three-year UK career with a .307 (177-for-577) average, with 36 doubles, six triples, 33 homers and 131 RBI, stealing 42-of-54 bases and owning career marks of .562 (slugging) and .377 (on-base percentage) … In 2005, John hit .344 with 10 homers, 52 RBI and 23 steals, before powering UK’s championship team in 2006 with a .291 mark with 18 doubles, 18 homers, 56 RBI and 12 steals … John went on to play six years in the Chicago White Sox and Tampa Bay Rays organization, reaching as high as triple-A with the Rays in 2011 … John played in 646 minor league games, with 154 doubles, 34 triples, 76 homers and 339 RBI, stealing 112 bases … Father played in the MLB and won two World Series with the Orioles and Dodgers, currently serving as a big league base coach for the Milwaukee Brewers … Father John played 11-years in the big leagues, belting 70 homers and stealing 98 bases, with a .283 career MLB average … Brother, Jeremy, played baseball at Grambling State and was drafted by the Padres …Jeremy played in 109 games at Grambling State, with a .321 average, 12 homers, 61 RBI and 25 steals … Cousin, Josh Harrison, played baseball at Cincinnati and was drafted by the Chicago Cubs, and was a 2014 National League all-star selection by the Pittsburgh Pirates … Cousin, Vince Harrison, attended Kentucky and was drafted by the Marlins.